It's the first game of the season for the Chittenden South Burlington U8 girls hockey team. The U8, or 8-and-under, team is made up of 6- to 8-year-olds, but only the 10 most experienced girls are playing today. Their opponents, a coed team from Lyndonville, traveled all the way to Cairns Arena in South Burlington for the match.

Hockey games at this level are cross-ice — played on half the rink — with just three players and a goalie per side and no score keeping. And they're fast-paced: Every 90 seconds, a new trio of players rotates onto the ice. As the skaters scramble and slide around, the benched girls rhythmically pound their sticks on the Plexiglas that separates them from the action, shouting "Let's go, CSB!"

In the stands, their parents are just as boisterous. "Come on, girls!" they shout, their eyes fixed on the ice. "Nice job!" "Good race, Ava!" "Stick with it, Sunshine!"

Stick with it: That's exactly what coaches around the state are trying to get girls to do. Hockey is a popular sport in wintry Vermont. But it's also a traditionally male-dominated one, with a reputation for being aggressive. Despite the enthusiasm on display at Cairns, parents and coaches say that convincing young female players to commit to hockey can be a challenge.

"For boys, you don't have to do the work," says John Maddalena, who coaches the Essex High School girls' hockey team. "For girls, if you don't get them hooked, they're not going to play."

Maddalena saw this firsthand. When his 10-year-old daughter, Nielsa, was younger, she had to play hockey on a co-ed team with her brother because there weren't enough players to form an all-girls team. "She really lost interest for a couple of years," he says. 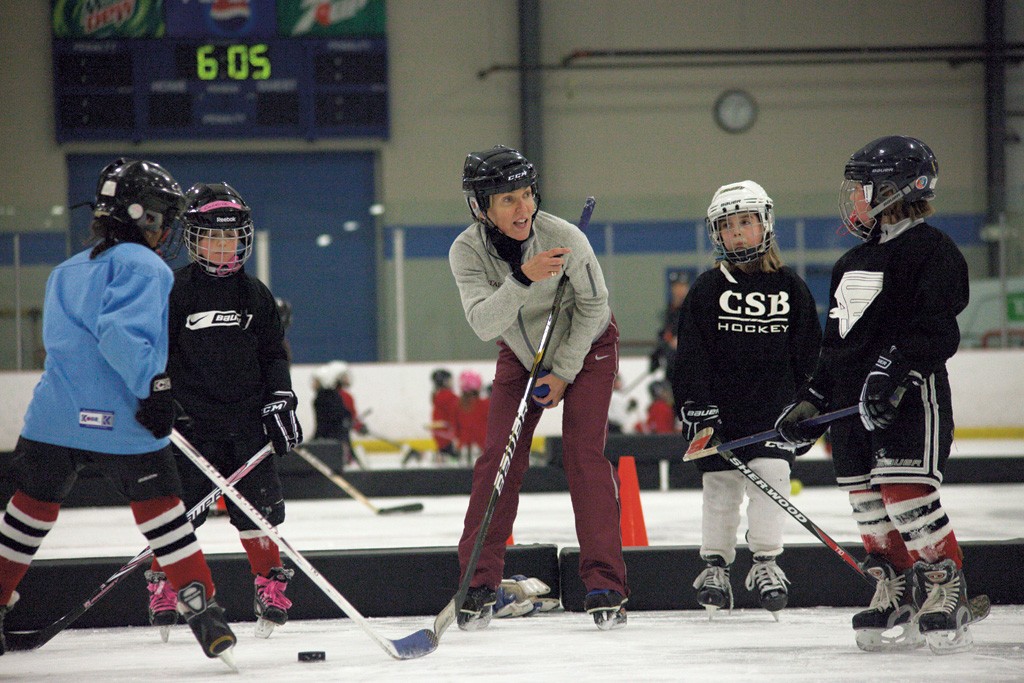 That's why he started the all-girls U8 team, which draws participants from South Burlington, Shelburne, Charlotte, Williston, St. George and Hinesburg. Three years later, there are two dozen players on the roster.

"I have had so many parents come up to me and thank me for having the U8 girls program, because their daughter would not have tried hockey if it meant playing with the boys," Bushweller says.

If it's so hard to get girls to play, why bother encouraging them?

Taylor Hallowell, an Essex High School ice hockey alum who's now a sophomore at Amherst College — and plays for that school's field hockey team — says the sport had a lasting effect on her. "I think that playing hockey as a young girl helped shape my competitive personality that has lead to some of my successes in life," she says. "I remember feeling like I wanted to prove myself, and that mentality carried over into other areas, like school."

Julie Miller-Johnson, women's director of the Essex Youth Hockey Association and mom to a 13-year-old, hockey-playing daughter, says that watching girls play is inspiring. "They develop a sense of self-confidence and self-esteem and physical strength that will serve them their whole life," she says. "They walk off the ice feeling they stand two inches taller."

Is it the gear? The speed? The ice? Whatever it is, Miller-Johnson says, "There's something really powerful for girls playing hockey. It makes them feel invincible."

Hockey definitely has some drawbacks. It's "all-consuming" for everyone involved, says Miller-Johnson. "Parents whose kids play hockey talk about it all winter long." Practice times change each week, and teams often travel for games, so "it takes a lot more mental space" than other sports, she notes.

And then there's all that gear: sticks, helmets with cages, chest protectors with shoulder pads, padded hockey pants, shin guards, and knee and elbow pads. Thrifty parents can scour Play It Again Sports and find hand-me-downs on Front Porch Forum, but they're probably going to spend at least $50 to $100 per kid, per year, on equipment alone. 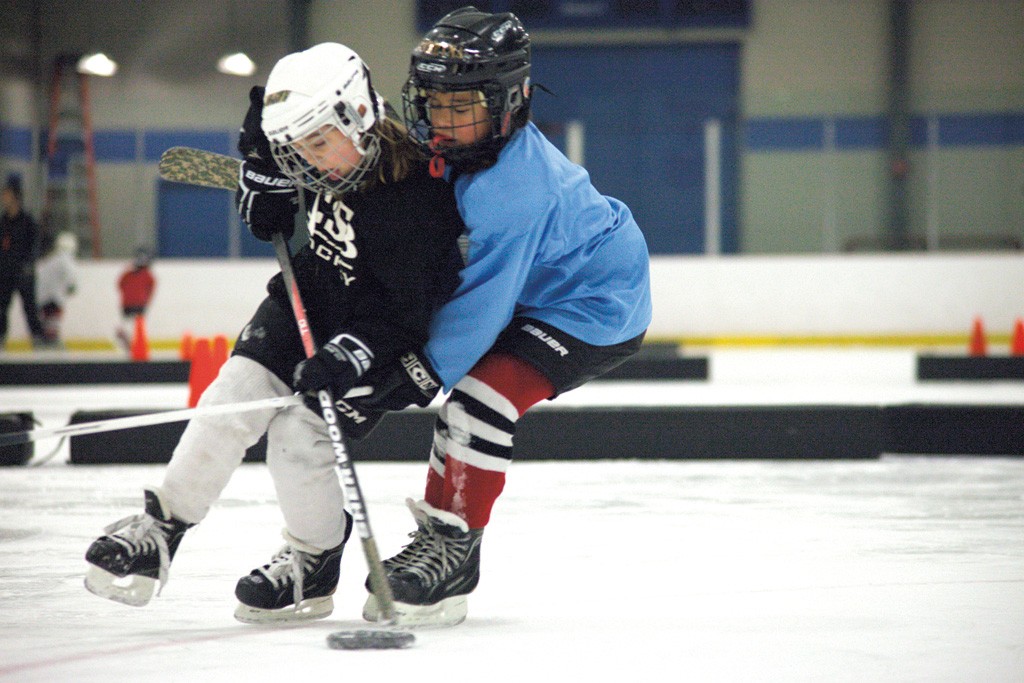 Many youth hockey associations offer reduced enrollment costs, especially at the youngest levels, says Carol Weston of the Vermont State Amateur Hockey Association. But the investment of both money and time dissuades some families from getting — and staying — involved.

Even so, thanks to local coaches' and program directors' efforts, the number of young girls playing hockey in Vermont is on the rise. During the 2012-2013 season, 342 girls ages 8 and under played youth hockey in Vermont. The next season, 370 played, according to USA Hockey.

"It's not so much about the competition but the camaraderie," says Maddalena, whose daughter now plays on the Essex Youth Hockey Association girls U10 team. "I think the social side of girls hockey is really important, and if you want to promote it, you need to recognize that."

CSB girls director Bushweller's 9-year-old daughter, Karina, has played on an all-girls team for three years. "The whole entire season, you hang out with your team," she says, adding that the experience has enabled her to make friends from other towns. She especially likes the team-building parties, which happen several times each season.

Miller-Johnson has used a number of effective methods to recruit some of Essex Youth Hockey Association's 90 female players. Every February, the league offers a Girls Try Hockey for Free event. Her teams participate in the Essex Memorial Day Parade, where they proudly brandish a "Girls Play Hockey" banner, increasing their visibility in the community.

And then there's Taste of Hockey, a three-day program at the Essex Skating Facility that introduces elementary-age girls to the sport each June.

"It's like this magic recipe for success," says Miller-Johnson. At the start of the program, "they have no idea what they're doing, but by the third day they think they're, like, hockey stars."

Playing With the Big Girls

Another way to encourage young girls to stick with hockey? Introduce them to older female players.

Laurie Brown, head coach of the CSB U8 girls team, invited the women's ice hockey team from her alma mater, Middlebury College, to assist with instruction at a recent practice. The younger girls scattered to different parts of the rink to work in small groups with the collegiate athletes.

"How do you score goals?" Middlebury junior Katie Mandigo asked her group. "You take a shot!" She went on to demonstrate proper shooting form. "You always want the puck to be here, on the heel of the stick," she said. She slammed the puck against the side of the rink, and the younger girls followed suit.

Mandigo, who grew up in Cornwall, played youth hockey — primarily with boys — until she joined a girls high school team in ninth grade. She credits her work ethic, confidence and sense of accountability to her time on the ice.

It's important for young players to have role models, says Maddalena. His high school team attends some of the Essex Youth Hockey Association's girls practices and games, and he's even invited the younger girls into the high school locker room to sit in on team discussions.

Eight-year-old Leighton Guyette, who's on the CSB U8 team, decided to try hockey because "my sister played and said it was fun," she says. What does she like about the sport? "You get to make a lot of goals!"

CSB coach Brown says she's optimistic about the future of girls hockey, but notes that it's important to focus on providing a good experience for her players right now.

"What I really want for our girls is for them to have opportunities that are parallel and equivalent to what boys have," she says, "to be out there in the moment and have a great experience and push themselves in the vein of having fun."

The fun is evident during the U8 girls game against Lyndonville. Skaters rotating into the game propel themselves eagerly from the sidelines onto the ice, like penguins gliding into the water. Anticipating the action, the girls squeal with delight.

Meanwhile, Coach Brown pats benched players on the back as they slurp water from their sports bottles.

When the two 25-minute games are over, the girls line up on the ice and shake hands with the opposing team. They emerge from the rink, hot pink mouth guards dangling from their helmets, smiles on their sweaty faces.

The Next Step: High School

Between 2009 and 2011, girls' high school hockey in Vermont hit its peak, with 22 teams. But since then, high schools have struggled to fill their rosters. In some cases, they've had to join forces.

Burlington High School hasn't had enough players for a girls varsity team for the past several years, says the school's athletic director Jeanne Hulsen. This year, BHS entered into a two-year agreement with Colchester High School to form a co-op team that will be known as BHCH.

According to EYHA's Julie Miller-Johnson, some girls have been pulled away from their local hockey leagues by the Vermont Stars, a select youth hockey program for girls ages 9 to 18 that competes during the regular hockey season throughout the northeast. Many Stars players go on to play for Rice Memorial High School's Girls Prep Hockey team.

Walter O'Brien founded the Stars 11 years ago to increase the rigor of girls hockey in the state. "Local teams don't necessarily meet the needs of the really committed athlete," O'Brien says. All of the Stars coaches are former NCAA women's hockey players.

Still, some local hockey supporters feel that the exclusive Stars are doing a disservice to girls' hockey. "We don't have enough girls in the state of Vermont to support two levels of hockey," Miller-Johnson says.

The solution, she suggests, is something like the Shamrocks, a select girls' hockey team founded in 2008 by SBHS principal, Pat Burke. Because the team plays in the off-season, it allows girls to compete at a higher level while also playing on their local high school teams.

Say What? A Hockey Glossary

Checking: A defensive technique in which a player drives his body into an opponent to gain control of the puck. Checking isn't allowed in girls hockey; boys are allowed to check starting at the Bantam level.

Cross-ice hockey: Boys and girls play this smaller variation of the game at the Mite level. Games are three-on-three, and played on half or one-third of the rink, which gives younger, less experienced players more playing time.