Wrestlemania: How I Learned to Stop Worrying and Love Youth Wrestling 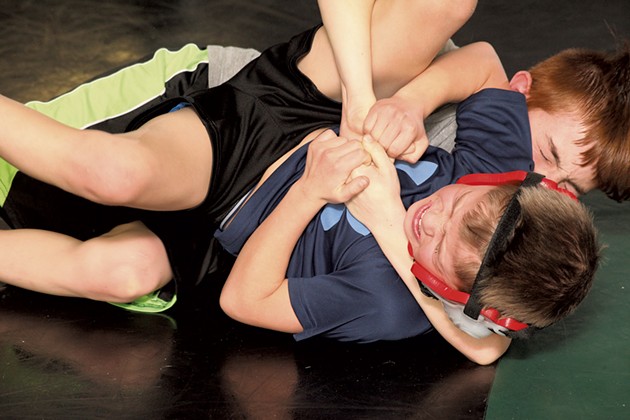 The Sunday before Valentine's Day, I crouched at the edge of a padded mat on the floor of the gym at Lake Region Union High School in Barton. My son was getting ready for his first wrestling match of the season. Anxious and excited, I held up my smartphone to film it.

Graham, 11, wore his black Colchester Cobras singlet and size 11 wrestling shoes. Tall for his age and husky, he looked like a future linebacker. His opponent from the Northeast Kingdom Pythons was roughly the same age and size. Both were in the tournament's largest weight class for fifth and sixth grade wrestlers; neither wore headgear, which is optional for kids until the seventh grade.

The boys walked to the center of the mat and faced each other. They shook hands, then dropped into their stances — knees bent, hands in front of their faces.

When the referee blew his whistle, Graham's opponent lunged forward and tried to grab the back of Graham's neck. My son backed up, pushed the boy's hands aside, and reached for the back of his neck. They lurched around the mat until Graham pressed the boy's head down. Then Graham sprawled on top of him, putting his weight on the other boy's shoulders and back.

But his opponent twisted away, and Graham ended up flat on his stomach. The NEK wrestler scrambled on top of him, scoring two points for the takedown.

"Come on, Graham!" I yelled encouragingly.

"Be aggressive!" shouted the Python's coach. "Push his head down!"

The boy mashed Graham's face into the mat with his left forearm and tried to dig his right hand into Graham's armpit, to turn him onto his back. If he managed to flip Graham and pin his shoulders to the mat for three seconds, the match would be over. "Get your arm in there!" urged the Python's coach. "Stay on top!"

When the ref blew his whistle at the end of the one-minute period, I exhaled audibly. I hadn't realized I'd been holding my breath.

During the next two periods, Graham scored three points by flipping his opponent onto his back for two seconds. He eked out a 3-2 win.

When I recounted this match to one of my coworkers, she seemed astonished by the physicality of it. "In any other sport, the ref would call a foul if the kids even touched each other," she marveled.

I tried to convince her that her two boys would enjoy wrestling, but she seemed reluctant. "How long did it take to get used to watching your kids get beaten up like that?" she asked.

I told her it's never easy to see them lose. Both Graham and his sister, Ivy, 8, wrestle with the Cobras. This is their fourth season. Yes, wrestling is a coed sport (see "Wrestle LIke a Girl").

The K-6 level isn't as intense as the middle and high school version. The kids are segmented into age groups: grades K-2, 3-4 and 5-6. Matches last three minutes instead of six. And the kids aren't as worried about making a certain weight. At the start of each tournament, they're separated into weight classes like A1 and B14 based on who's shown up to wrestle.

Bruises and bloody noses are common, but serious injuries are rare. The referees don't tolerate violent behavior, and there are penalties for illegal moves. Still, the sport is physically, mentally and emotionally demanding — for kids and their parents.

The weekend tournaments are definitely a slog. My kids will compete in seven of them, from February until mid-April, most at least an hour's drive from home. We'll leave before dawn and be gone all day, though they might wrestle for just 12 minutes each — less if somebody gets pinned.

And their matches can be hard to watch. I've seen my precious children squeezed, tripped and thrown to the ground. I've seen them strain with all their might to avoid being beaten, and cry when they lose — or sometimes even when they win.

It's bearable because I also see what they're learning: how to win and lose graciously, for example, and how to support their teammates.

They also learn the value of hard work and persistence. When my kids win medals and trophies, or T-shirts with the word "champion" on the back, they're proud of themselves. They've earned those rewards.

At their end-of-year banquet in 2015, the year the Cobras won the K-6 state championship, their head coach, Scott McPherson, told the team that wrestling was the toughest thing they'd ever do. I reminded him of that recently during a pre-practice interview. He insisted it's true.

He speaks from experience. McPherson, 49, grew up in Westford and started wrestling for Essex High School the summer before his freshman year. He's competed or coached nearly every season since — lately while working as a technician at GlobalFoundries. He's been with the Cobras since 2000. "I've coached the kids of kids," he told me. "I'm on my second generation. That makes me feel kind of old!"

He doesn't look it. Trim and fit, the 5'7" father of two grown sons wears Bermuda shorts to practice that reveal his massive calves; his T-shirts fit snugly around his muscular arms. A no-nonsense buzz cut makes him look like a drill sergeant. For the most part, his wrestlers treat him like one. I've seen tiny kindergarteners and beefy teens respond to him obediently.

But while McPherson is firm, he's never mean. He doles out the occasional compliment and gives the kids his full attention during their matches, encouraging them and suggesting moves, consoling or congratulating them at the end.

Like all of Vermont's 20 or so K-6 youth wrestling clubs, Colchester's operates independently of the schools. Parent-driven fundraising pays for the team's equipment, uniforms and practice space. This year, the 32-member squad, with wrestlers from Colchester and nearby towns, practices in the basement of the Malletts Bay Congregational Church. The narrow room's tile floor is mostly covered with wrestling mats. "No whining," declares a sign hanging from the low drop ceiling.

The Cobras practice at least two nights a week. McPherson and his assistant coaches keep them moving for the whole 90 minutes, minus water breaks, doing calisthenics, skill drills and practice matches — usually to '80s rock anthems from the Mötley Crüe station on Pandora.

Near the end of a recent practice, the 20 Cobras who had shown up looked exhausted. "You guys wanna machine gun?" McPherson asked them. No one answered. "I think that's a yes," he said with a smile.

Another whistle blast and they were at it again. "I'm starting to see pain in some faces," McPherson said over the sound of their pounding feet. "I see grimaces; I see red faces. That's good stuff!" He blew his whistle and they dropped again.

"We don't have time," one of his wrestlers complained meekly. "Yes you do," he countered. "You have five minutes."

When they finished, he called them into a huddle to end practice. "One-two-three," he said. "Cobras!" they shouted together.

When I asked McPherson why he does this year after year, he grinned and quipped, "What else am I going to do in the winter?"

Like all K-6 coaches, McPherson is a volunteer. In addition to working with the Cobras, he and assistant coach Jason Lavoie are trying to bring back Colchester's high school Lakers wrestling program. The school district cut it years ago due to lack of participation.

The Cobras subsidize the five current Laker wrestlers. They work with McPherson and Lavoie — and the seventh and eighth grade Cobra kids — in the church basement every weekday after school, and participate in tournaments against other schools' JV and varsity teams.

Coach Lavoie, a former Laker wrestler who competed at Norwich University, told me he does it because "it's in my blood." When I pressed McPherson, he added that it's gratifying to see his wrestlers improve.

"To see how hard these kids can work, and see how they respond to asking them to work harder, it's pretty amazing," he said.

I asked a few of the kids why they like the sport. "The energy I get when I'm on the mat, and the challenges," said Ben Stapleton. "And the coaches, of course." This is Ben's tenth season; the lanky ninth grader is a Laker wrestler who helps out at Cobra practices.

When I asked my own kids why they wrestle, both said they appreciate their coaches and their teammates. "I like how everybody encourages me," said Ivy.

Graham said wrestling has "helped me with my social skills." It reminded me of what assistant coach Brian Lafond told me — "You can tell someone who's wrestled," he said. "These kids come up and shake your hand."

Graham also said that he's gotten used to the chaotic tournament environment. He's comfortable now under all that pressure. That should help him navigate stressful situations in sports and in life.

At wrestling tournaments, he said, "I feel like I'm at home." 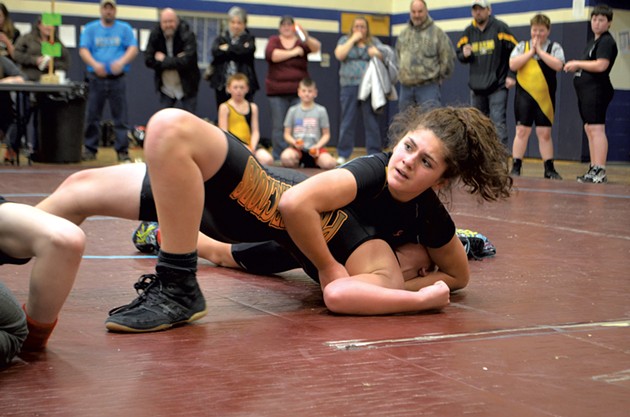 When my daughter, Ivy, was 5, she saw her older brother wrestling and asked to join the team. The Colchester Cobra coaches were happy to have her. In Vermont, boys and girls compete against each other through high school.

Wrestling is empowering for girls, but it can be tough for them to compete in such a male-dominated sport. Ivy was the only girl on her team for a couple of years. Fortunately, she made friends with girls she met at tournaments.

It's hard to know exactly how many K-6 girls are wrestling in Vermont this year. But anecdotally, parents and coaches say their numbers are growing. Two parents told me their daughters were inspired by a girl wrestler character on the sitcom, "Life With Boys."

For older girls, the trend is clearer. Nationwide, there were three times as many high school girls wrestling in 2015 as there were in 2013; the number went from 273 to 858.

Colchester head coach Scott McPherson speculated that the increase is tied to women's wrestling becoming an Olympic sport in 2004.

If so, it may be about to get another boost. In the 2016 Summer Olympic Games, Helen Maroulis became the first American woman to win a gold medal in women's freestyle wrestling. The 25-year-old Maryland resident has become an outspoken advocate for girls' wrestling on her blog at helenmaroulis.com. Her recent posts have included "Why I Chose Wrestling" and "5 Reasons Wrestling Makes a Great Valentine."

In one called "Why Girls Should Wrestle," she points out that there are many college scholarships available for wrestling — and the opportunity to travel the world competing for Team USA. "Which is not an unrealistic dream," she writes, "since most of the competition is abroad."