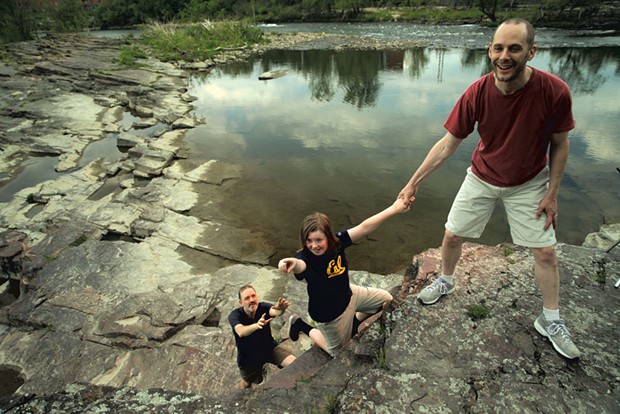 A big welcome sign hangs outside the front door of Jason Lorber and Nat Lew's house in Burlington's Old North End. Affixed to the doorpost is a mezuzah — a parchment scroll in a decorative case — that signals theirs is a Jewish home. Inside, a piano, books and family photos fill the cozy living room.

Seventeen years ago, Jason and Nat met at a San Francisco synagogue. Nat was in graduate school studying for his PhD in musicology at University of California Berkeley. Jason earned his MBA from Stanford University before starting his own consulting business in 1997. In 2002, Nat was offered a position as an assistant professor in music at Saint Michael's College, so the couple relocated to Burlington.

They've both been married three times — to each other. Once at their Oakland, California, wedding in 2003, then at a civil union ceremony and, later, a legal wedding, both in Vermont. Four years after moving to Vermont, despite having no family nearby, Jason and Nat decided to become fathers: They adopted their son, Max, in 2006.

In addition to working and parenting, the men stay busy with personal pursuits. Jason has performed comedy and improv and done stage and film acting. He also served in the Vermont House of Representatives from 2005 to 2012. These days, he's focused on his firm, Aplomb Consulting, which helps companies with strategy, teamwork and change management. He also takes Zumba classes twice a week at the Burlington YMCA.

Nat is the artistic director of a vocal ensemble that rehearses weekly in Montpelier, and he also directs the St. Mike's College Chorale.

The two dads manage to balance it all with good communication — and some tech support.

On divvying up morning and evening routines:

Nat: Roughly speaking, we alternate mornings and evenings — bedtime and wake-ups. It's a Papa morning or a Daddy morning. The other [parent] doesn't have to be involved. Max is an early riser, and we're not. He's up at 6 a.m. every day, but he gets us up at 7 a.m. on a school day. [One of us will] make sure he's dressed appropriately, and then they provide breakfast at school. He has to practice his piano and do his morning things: brushing his teeth; there is usually time for him to draw a picture or do something else. Then [one of us] walks him to school. Then, the next day, it's the other one's turn. Weekends are a little more complicated, but still, every night, one of the last things we say to Max is, "Remember, tomorrow is a Daddy morning," or, "Tomorrow is a Papa morning," so he knows.

Jason: So we tend to both pitch in for the shopping. When we're both home, Nat will always cook and I'll do dishes. But there are many times when Nat is away and I'll cook.

Nat: I like to cook, although I am not nearly as...

Jason: He is a great cook.

Nat: In grad school, and before Max, I would do elaborate, complicated things, and now, you know, we're busy and you just do what comes naturally. I enjoy it. It's centering. It's calming. I put on VPR and get the kitchen going.

Nat: I am the straightener, the put-awayer.

Jason: I am in charge of the laundry. He washes, I fold.

Nat: I run the machines, bring out the clothes and he folds.

Jason: I totally got the short end of the stick on that one. Oh my God, I could be folding for hours. I'm like, How many clothes do we have?!

Nat: We do have someone who does the real cleaning every other week. If there is a mess, then whoever sees it deals with it.

On having one set of wheels:

Jason: We have always been a one-car family, which is incredibly manageable, shockingly! We use CarShare Vermont, which is awesome.

Nat: I take a bus to work whenever possible. I can take one from right outside Max's school, change buses once, and can be at St. Mike's in 25 minutes. Most days I don't need the car. But there are exceptions, like if there is something special going on, and we have to negotiate and figure it out.

Jason: I meet clients at their work, so I usually need a car. Right now my active clients are in Washington County, but there have been times when most of them are in Burlington, which means, hey, a bicycle will be my mode of transportation. Or just walking.

Jason: If you look at our calendar you'd be like, "Oh my God! You guys are busy!" But, you know, a third is Max, a third is Nat and a third is me.

Nat: It's really this amazing tool.