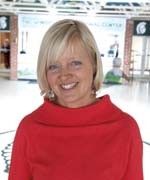 Stress is a normal part of childhood. But when it starts interfering with a child's day-to-day activities, how should parents respond?

This month, Dr. Mary Ann Donnelly-DeBay, a clinical and school psychologist for the Winooski School District, offers advice on recognizing and coping with kids' anxieties.

KIDS VT: How common are anxiety disorders in kids?

DR. MARY ANN DONNELLY-DEBAY: It's estimated that as many as one in eight children and adolescents will be diagnosed with an anxiety disorder. These disorders are the most commonly diagnosed mental health disability in the country among people of all ages, and they're on the rise in our society. We're seeing more generalized anxiety, more post-traumatic stress disorder, more obsessive-compulsive disorder — the entire spectrum of anxiety disorders, which can all present very differently.

KVT: What do anxiety disorders typically look like in kids?

MADD: There is no "typical." A lot of anxiety in children is just a normal part of their development. A little kid may have separation anxiety from Mom, or nightmares after watching a scary movie. A teenager may have mood swings and anxiety transitioning from middle school to high school. None of those things is unusual, but we still call it anxiety. However, when it interferes with friendships, family, schoolwork and extracurricular activities, then we start to ask whether it's significant and requires intervention.

KVT: At what age does anxiety usually appear?

MADD: It can occur at any age. In the past, people didn't look for it in younger children. I've never seen an infant or 1-year-old diagnosed with an anxiety disorder, but I've had kindergartners who displayed obsessions and compulsions, such as excessively worrying about germs, bringing in their own cups and silverware because they can't use what's at school. It can become so intense that it prevents them from being successful at school. 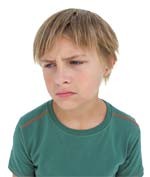 KVT: Does anxiety present differently in younger kids than in older ones?

MADD: Younger children sometimes become hyperactive or irritable or have trouble concentrating. Sometimes they have nightmares or difficulty sleeping. With adolescents, you tend to see more moodiness. But it can look different at any age. I've seen adolescents who are having problems focusing. Some kids are such perfectionists that they have trouble finishing their schoolwork and never turn it in. Children of all ages may appear sad, hopeless, angry or extremely afraid. Fear and anxiety are normal and healthy responses to threatening or stressful circumstances. However, when those emotions disrupt a child's ability to function, he or she may have an anxiety disorder.

KVT: Are there common misconceptions about anxiety disorders?

MADD: Most people associate them with the internalizing child who's trembling in the back of the classroom and underperforming. Actually, it can also be the kid who's really anxious and has a lot of those same fears but responds by being oppositional or hyperactive. There's also this myth that asking kids if they're thinking about hurting themselves will put that idea in their head. There's nothing wrong with asking that question.

KVT: Is a child more susceptible to an anxiety disorder if one or both parents have one?

MADD: Yes, there is genetic vulnerability, but stressors in the environment can also trigger anxiety. A mother's stress in utero can contribute to the child's vulnerabilities down the road. When a nursing mother experiences stress, her cortisol levels rise, and that will make the baby more susceptible. Poverty also contributes to it, as can inconsistent parenting in a chaotic environment, such as in homes where drugs or alcohol are abused.

KVT: How do parents or caregivers know when normal anxieties require professional help?

MADD: Typically, it's big changes in behavior that bring a kid to my office. If parents see such a change, it's always a good idea to check in with other people who know that child, such as pediatricians, teachers, school counselors and coaches. Sometimes it's important just to monitor the behavior and see if it requires an intervention, or if it's just part of a normal developmental phase. If children ever say that they're thinking of harming themselves, families can get immediate help through crisis resources such as First Call in Chittenden County.

KVT: Is there anything parents can do on their own?

MADD: Asking questions is always great. Kids often have a hard time expressing in words what they're feeling. But if they are encouraged, they often show us through their behaviors.

KVT: What are your thoughts on the use of anti-anxiety drugs?

MADD: If a kid can participate in cognitive behavioral therapy, I would hold off on the meds until I gave that a try. Some kids just can't do it, though, and need the meds to kick-start their therapy. There's research showing that those meds, called SSRIs, can increase the risk of suicide.

KVT: What is cognitive behavioral therapy?

MADD: It involves examining the connection of thoughts, feelings and actions. We work on significantly changing the child's thought patterns in order to alter the resulting feelings and behaviors. There's good research to support that it leads to the best outcomes. A lot of kids achieve great success with this approach, both in managing their anxiety and curing it.