What Should Parents Know About Car Seat Safety?

by Tim Gould and Ken Picard 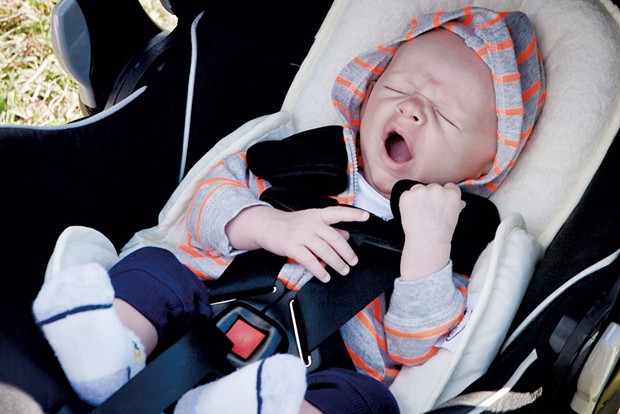 Driving is among the most dangerous activities parents do with their children. Though most moms and dads know to secure their children in a passenger restraint system, the misuse rate of children's car seats is high. According to a 2016 study published in the Journal of Pediatrics, 95 percent of infant car seats were used improperly.

Sergeant Tim Gould works in the training and recruiting division of the Vermont State Police and has spent 16 years promoting child passenger safety. Gould explains the differences between what state law requires and what are considered best practices for keeping kids safe on the road.

KIDS VT: What are the laws involving children's car seats?

TIM GOULD: So, the first stage is the rear-facing infant seat. Under Vermont law, children are required to be in a rear-facing, five-point harness seat until the age of 1 and until they weigh at least 20 pounds. Once they meet those two criteria, they're allowed to sit in a forward-facing seat.

KVT: Do you recommend that kids stay rear-facing longer than the law requires?

TG: Yes. The American Academy of Pediatrics' best-practices recommendation is to keep kids rear-facing for as long as possible, meaning at least until age 2 and until they reach the height and weight limits of their particular seat, which is usually 30 to 45 pounds. Some smaller kids may not reach the upper limits of those seats until age 3 or 4. Convertible seats, or those that can be switched from rear- to forward-facing, generally have higher weight and height limits, meaning that kids can be rear-facing in them longer.

KVT: How long are kids required to be in a five-point harness seat before moving to a booster?

TG: Vermont law says that any child who weighs more than 20 pounds and is older than 1 shall be restrained in a child-restraining system until age 8, but the law is vague on the use of booster seats versus harness seats. Once the child outgrows the five-point harness, they can move to a booster, which is designed to put the child in a position where the vehicle's seatbelt fits them properly.

TG: A lot of parents will say, "OK, no more booster seat required," and technically that's correct. It's not illegal to move out of a booster seat at 8. However, most kids still need one, based on their size and how the seatbelt fits them.

KVT: How do parents know if their child no longer needs a booster?

TG: The best-practice recommendation is that they meet five criteria: First, does the child sit all the way back against the vehicle's seat? Second, once they buckle up, does the lap belt sit below the stomach and touch their thighs? In other words, if the kid is so small that the lap belt rides up across their belly, they wouldn't pass the test. Third, is the shoulder belt centered across the shoulder and chest? With some smaller children, if you buckle them up, the shoulder belt will ride up on their neck. Fourth, can their knees bend comfortably at the edge of the seat so that their legs hang freely? The fifth criterion is behavioral: Can the child remain seated like that for the entire ride? If they move even a little, it can put those belts out of position so that they won't work properly in a crash. The National Safety Council recommends that children meet three criteria before moving out of a booster seat: They are 9 years old; 4 feet, 9 inches tall; and weigh 80 pounds.

KVT: What do you advise parents whose kids want to get out of a booster early because all their friends are out?

TG: This is an area where I see a lot of kids making the transition way too soon. With my own kids, I drew a hard line with them. This should not be a debatable subject. It's a serious safety matter. Those kids who are out of a booster too early, or sitting in the front seat before they're big enough, are putting their safety at risk. My advice is just stick to your guns. Make sure they're ready and it's appropriate to move to the next level, because once you move them to the next level, it's going to be a fight to move them back.

KVT: When is it legal for kids to ride in the front seat?

TG: Vermont law doesn't specifically address that question. The only law covering children in the front seat addresses rear-facing seats, which cannot be secured in front of an active airbag. Ideally, the back seat is always safer for kids, but if you have a two-door pickup truck with no back seat, you must switch off the passenger-side airbag to transport a child. As long as you can deactivate the airbag, it's legal, though not ideal. Generally, children should not ride in the front seat of a vehicle until they're at least 13 and have outgrown a booster seat.

KVT: What are the most common mistakes you see?

TG: One of the most common things I see involves booster seats: If a child is tired or uncomfortable, especially on a long trip, sometimes they'll slouch over and it will put the seatbelt in a spot where it's not supposed to be. Or if it's uncomfortable, they'll put the shoulder belt behind their back or under their armpit, which actually can be very dangerous. If there's a crash, rather than the force of the impact being spread out across their shoulders, hips and chest, it can be concentrated in their abdomen, which can cause serious injuries.

Another common error is when the harnesses in both rear- and forward-facing car seats are not cinched tight enough. If you grab the strap that goes over their shoulder, you shouldn't be able to pinch any slack.

This time of year, winter clothing can be an issue. You really want to limit the number of layers between the harness and the child because that reduces its effectiveness. So, with the infant seats that you carry in and out of the house, get the child secured in it, then put blankets over them to carry them out to the car.

KVT: What's the fine for violations?

TG: For a first violation, the fine is $25. For a second violation it's $50 and for the third, it's $100 — and drivers can be stopped for this violation alone. However, this is an area of the law that tends to get treated more with public education. When we do seat-check events, we want people coming in, getting educated and getting these issues corrected. The last thing we want is to have them leave with a ticket.