Walking and Biking to School 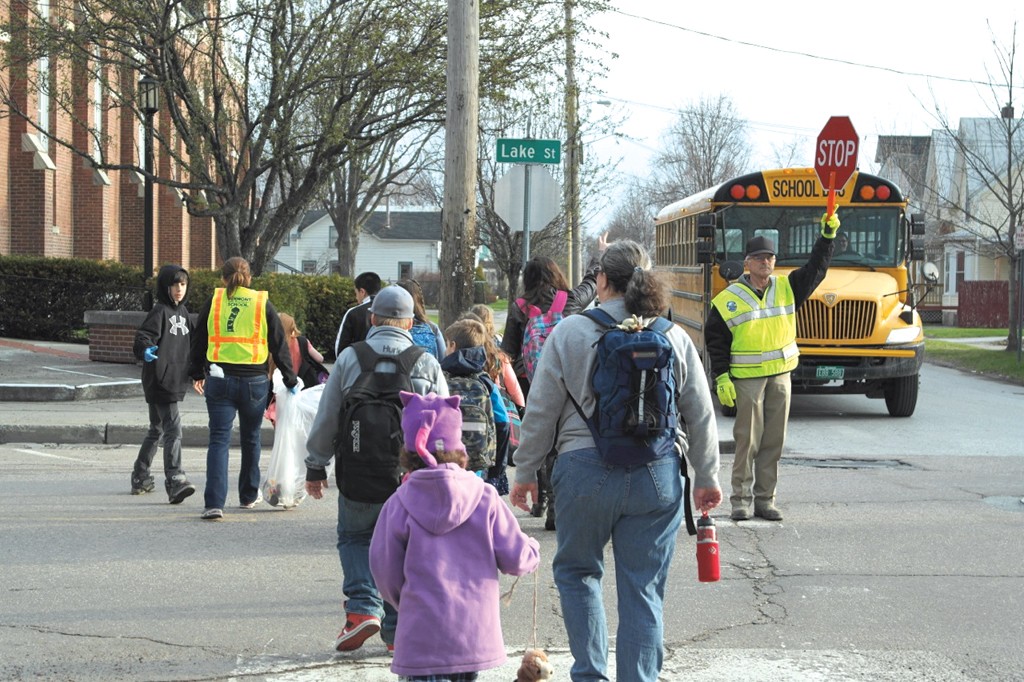 Old-timers who tell tales of walking miles to school might be surprised to learn that many Vermont kids these days are following in their footsteps — voluntarily. Close to 100 schools in the state have walk- and bike-to-school programs that aim to increase the number of students on the move.

These initiatives are made possible, in large part, by Vermont Safe Routes to School. This statewide effort is funded by a federal grant — it's the local arm of a national campaign — and administered by the Vermont Agency of Transportation. Safe Routes launched in Vermont in 2005; today the program reaches approximately 26,000 kids at 92 schools, says the state's Safe Routes outreach manager, Maren Hill.

Newport City Elementary School is one of them. Last school year, on the third Thursday morning of every month, Newport students joined adult volunteers on one of three different "walking school bus" routes, picking up more kids along the way. Colleen Moore de Ortiz, a parent and public health nurse in Newport, helped found the school's Safe Routes program a year ago.

"It's a really great start to the day," says Moore de Ortiz, who walked the two miles from her home to school with her 6- and 11-year-old sons when her schedule allowed. "It gets the blood pumping and the body moving."

It was easy to get the school involved, she says. She filled out a simple enrollment form she found on the organization's website. Then an engineer from Boston came to the school and — using a map of the surrounding neighborhood and a list of student addresses — helped to identify safe and well-populated walking and biking routes.

Laura Asermily, a Middlebury resident who has coordinated the Safe Routes program at Mary Hogan Elementary School for the past four years, says climate change spurred her involvement in the program. In Middlebury, students who live more than two miles from the school qualify for school bus service. "We are really trying to reach that audience who lives within the two miles," she says.

Mary Hogan's Walk & Roll to School days are scheduled for the first Wednesday of every month. "It's become routine now," Asermily says. "It's on everyone's calendar."

To motivate kids to get involved, Safe Routes provides schools with small trinkets such as reflector bands and blinking lights to give to walkers and bikers when they arrive at school.

Some volunteers get creative. At Edmunds Elementary School in Burlington, where there's no school bus service, parent volunteer Rachel Shelley says they've held helmet-decorating parties and hung a big poster in the school's lobby for kids to sign when they get to school on foot or on two wheels. Twice a year, classes compete to have the most walkers and rollers for a given month. The winning class gets a Golden Shoe award and a party with smoothies made to order using a bike-powered smoothie maker.

It's not just the rewards that look different from school to school. In Newport, senior citizens, hospital employees, local law enforcement and city council members sometimes join the monthly walks. Knowing that community members are watching out for her kids has created a "feeling of connection" that Moore de Ortiz says has made her more comfortable letting her kids walk to different places. Another bonus? When city council members join the walks, she says, they get a chance to see firsthand the infrastructure that needs repair and the spots where people drive too fast.

Newport is one of the few Northeast Kingdom communities with a downtown. For many rural areas, walk-to-school initiatives are challenging. Miller's Run School in Sheffield has held Walk At School days, where students walked around the school grounds, says Hill. In some rural districts, kids get dropped off at a location half a mile from school and all walk there together. "It's a nice way to get kids walking to school and including them even if they're not able to walk from their homes," says Hill.

Winter weather can also be a prohibitive factor for walking and biking to school initiatives. Attendance tends to peak in the fall and spring, says Hill, and dwindle in the cold, snowy months.

Want to see your school sign up for Safe Routes? Contact the program soon if you want help. According to Hill, funding to support a paid staff member will run out in April 2016. After that, schools will be able to find information on the Safe Routes website but will have to take a DIY approach. In other words, it'll be more of an uphill trek.