Watercress tells the story of a girl whose parents gather wild watercress along a roadside in the rural Midwest. At first embarrassed by their unusual behavior, the child discovers as the story unfolds that her mother, a Chinese immigrant, picked this plant to survive a famine when she was a young girl.

Watercress is a story about how American children of immigrants inhabit both the United States and their parents' memories of another country. As our society reckons with questions of who is American, this picture book illustrates that families are at the heart of our complex human story.

Chin, a South Burlington resident, answered a few questions about his new book. 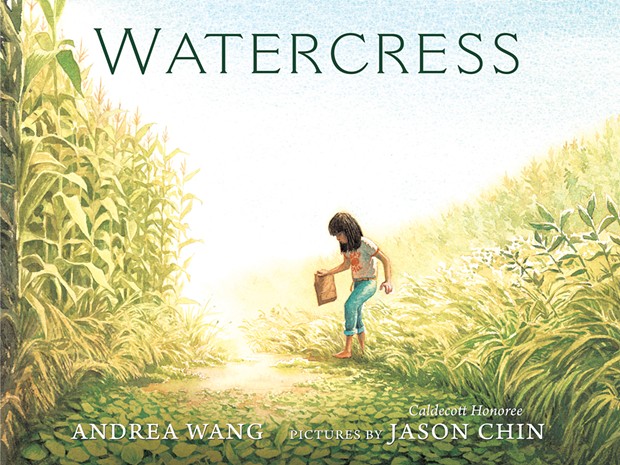 Kids VT: Could you share how your family's story affected the illustrations in Watercress?

Jason Chin: My father's parents immigrated to America in the first half of the 20th century. When I was about 12, my parents took us to China. We visited Hong Kong, where my grandmother was from, and the mainland, where my grandfather was from. It was transformative, although I was young and didn't realize it at the time. In college, I spent time studying in China. I studied Chinese history and traditional Chinese art. My memories of China, my interest in Chinese art and my experience as a person with Chinese heritage growing up in a rural town in New Hampshire influenced the creation of this book.

KVT: Why did you feature corn and bamboo in your illustrations?

JC: When I started working on the book, I knew that I would have to paint a lot of corn in the illustrations. So I went out to a field near my house to paint and study corn plants. While I was painting, it occurred to me that corn is an iconic American plant and bamboo an iconic Chinese plant. They are also both grasses and share physical traits. I thought it would make a nice motif for the book if I could, in a subtle way, use the plants to represent these two cultures.