As a child growing up in Burlington, Theresa Tomasi loved being invited to dinners at the home of her neighbor, who had 12 children. Tomasi was the middle child, bookended by two brothers, and she admired the neighbors' loving and active lifestyle. That experience must have planted a seed, she said — a seed that would keep growing until Tomasi herself had adopted 27 children.

At 91, Tomasi is still not an empty nester. Two of her adult daughters share her main house with her. Her youngest son attends Skidmore College in New York, and she's looking forward to his return home this summer. Her oldest son, a master carpenter in his fifties, suffered a stroke and now lives in the apartment in the back of her Williston home.

Her eight-bedroom, four-bathroom house is at the end of a suburban street, set on 50 acres of land. She has a menagerie of farm animals on the property, including two miniature horses, three ponies, a mule, a pig, chickens, a cat, three dogs and even a peacock. Some of the animals belong to her tenant, a friend who helps take care of the entire farm. Tomasi had originally wanted to be a veterinarian but said vet schools only accepted one woman a year when she was younger, so she became a social worker instead.

Tomasi spent 11 years as a case worker for the state and then served for three decades as the director of social services for hospitals that are now part of the University of Vermont Health Network. She was also the executive director of Lund, an organization that serves Vermont children and families and provides adoption services. Over the years, she encountered many barriers trying to adopt as a single person during the 1960s, then again as an older parent in the '70s, '80s and '90s.

"I was brought up not to concentrate on what other people thought. It actually didn't occur to me that I was doing anything except trying to get something that I personally wanted," Tomasi said. "Sometimes you would hit a blank wall and then just start over again."

Tomasi adopted her first child in the early '60s, when she was in her early thirties, working toward her master's degree in social work at McGill University in Montréal. She had previously been turned down to adopt in Vermont because she wasn't married, but the Canadian agency had recently set a new precedent since making an adoption plan for a single woman who adopted her siblings after their parents died. Tomasi had to be cleared by a psychiatrist. In Canada, religion was also a barrier. Tomasi, who is Catholic, could not adopt children from non-Catholic birth families.

She chose the name Tracy for her first daughter, continuing a family tradition of giving each of her children a name starting with the letter T. Her parents had done the same for her and her brothers, Thomas and Timothy, after whom two of her children are named.

"It's a sort of bonding — a way of keeping a big family connected," Tomasi explained.

Her children are affectionately nicknamed in the numerical order they were adopted. Toni Yandow, also known as T9 — who now works in adoption at Lund — said her mother has been her biggest influence.

"She taught me how to be a parent. She gave me all the tools I need to raise my son and do a great job with him," said Yandow. "You can't parent each child exactly the same, so on any given day she's 27 different parents for her children. That's incredible."

Yandow, along with her birth sister, moved in with Tomasi when she was 7, after spending several years in foster care. She still vividly remembers meeting Tomasi for the first time at a restaurant.

"I was terrified, so my sister and I hid under the table," said Yandow. "And then she told me she had a little puppy, and I was done. I was all about the animals."

Tai Tomasi, nicknamed T8, is an attorney currently working in Alabama as the director of accessibility, diversity and inclusion at the American Printing House for the Blind. She is blind herself and said her mom encouraged her to aim high despite her disability and always expected her to do chores alongside her siblings.

"I think that her breaking through those [adoption] barriers was key in my development as a person with a disability, because she definitely encouraged me to break down what barriers I faced as a blind person," Tai said.

Theresa Tomasi said she never set out to adopt 27 children; she would always wait until things felt balanced in her home before seeking to adopt again. At any one time, up to 13 children would live in the house. She once bought an ambulance and converted it into the family car.

"[The kids] were so embarrassed. It was a funny-looking vehicle, but it was very efficient," Tomasi said.

Inside Tomasi's house, the expansive dining room is still layered with reminders of how many children she's raised. Hundreds of cups are stacked high on a shelving unit at the end of her banquet-style table, which is surrounded by 11 chairs. An upside-down mug with the words "Happy Mother's Day" sits on one of the shelves

"People say to me, 'It's a wonderful thing you've done.' No, it wasn't. It was wonderful for me," Tomasi said. "I think I just wanted to repeat the wonderful experience." She credits her children for working together to make her large family run smoothly.

"They all helped out. They all did the dishes. They were all good cooks. I'm a terrible cook. I can hardly toast toast," said Tomasi, with a laugh. 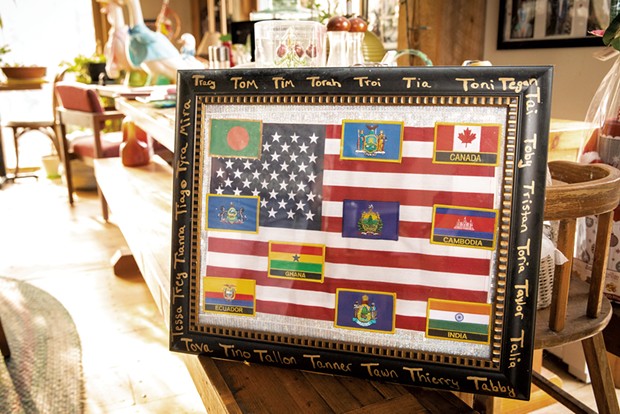 Her children arrived in her life at different ages — between infancy and 15 — and from different places. A framed piece of art shows the flags of the countries where her children were born: Canada, the United States, Cambodia, India, Ecuador, Ghana and Bangladesh.

"They all had certain sorrows about having to leave their roots, and some of them were older and had strong feelings about that. I think they bonded over a common purpose, common feelings," said Tomasi.

Living on an active farm, the kids grew up with horses to hay and animals to care for while Tomasi worked full time as a social worker.

"They never seemed burdened by it. It just seemed to be a common goal to get everything done. They were very supportive of each other," said Tomasi.

Wanda Audette, director of adoption at Lund, has known Tomasi for 25 years and helped her with eight adoptions. She said she watched as Tomasi created the village it took to raise each child.

"The kids get their needs met, and they may not get them met by their parent all the time, but they can get all of their needs met by the community of their family," said Audette. "She provides unconditional love and acceptance to her children."

Tomasi said several of her children were gifted athletes. She recalled her son Tino's first words when he got off the plane from Ghana: "Do you play soccer here?" Then he asked if he could start school the following day.

"We got into soccer, big-time soccer. We went to hundreds of soccer games ... They all played [soccer] and track," she said.

Many of her children went to college on scholarships for those sports. Several got scholarships to prep schools in New England.

"They really worked hard to achieve their goals," said Tomasi. Her daughter, Torah, is now a doctor in Maine, and Tino is studying for his PhD in psychology in Boston.

Twelve of her children live in Vermont, and the others are spread out across the country — including in California, Washington, Tennessee and Kentucky. Tomasi received an honorary degree from the University of Vermont in 2012 and was an Angels of Adoption recipient from the Congressional Coalition on Adoption Institute in 2004.

"I am not a good grown-up mother, because I'd like to keep them all at home." Theresa Tomasi tweet this

But her family has not escaped tragedy. A just-adopted daughter was killed in an auto accident right before she was scheduled to fly to America to meet Tomasi. Her son, Toby, died in a train accident in 1991, just before his 18th birthday.

"He was the nicest, kindest human being I've ever met. It was terrible for our family," said Tomasi.

Tomasi also lost a daughter, Mira, who had flown from India to join the family at age 15 but was in need of surgery and immediately had to be admitted to the hospital. She eventually passed away during open-heart surgery. The six weeks Tomasi mothered her left a deep impression.

"She said to me, 'Mummy, why is it that in America, people always bring you gifts when they come see you?' And I said, 'Because they want to show you they care about you.' 'Can't they just say it in words?' she said."

Tomasi said the pandemic has been hard for her family. Her out-of-state children can't travel, and her in-state children must be cautious when they visit.

"I really miss having them in the house, living here," Tomasi said. "I am not a good grown-up mother, because I'd like to keep them all at home."

But daughters Tegan, who is blind and on the autism spectrum, and Tabitha, who is severely cognitively impaired, still live with her.

"I think God was good to me because now I have two children that are going to stay home," said Tomasi. "And it really gives you a purpose in life."