Kerry Farrell has been a school nurse at Gertrude Chamberlin School, one of South Burlington's three elementary schools, for 12 years.

"This is my dream job. I love it," said Farrell who also lives and has raised her own children — ages 15, 20 and 22 — in South Burlington. "I love the kids. I love being part of a community."

As the only medical worker for the school's 280 students and 60 staff members, Farrell serves preschool through fifth grade, an age range that spans toilet training to puberty.

"I know every single kid's name, and I pride myself on knowing most of the parents' names," said Farrell, who previously worked as an emergency room nurse manager in Arizona. She was inspired to enter the field by her mother, who worked as a middle school nurse in Madison, N.J.

Farrell said the position suits her high-energy personality because it's a job that's constantly changing. Over the years, she has treated everything from broken bones, seizures, diabetes and asthma that have required calls to 911 to anxiety and other mental health issues.

"I love that the job is so dynamic. There's something new every minute. You have to be on your feet," said Farrell. 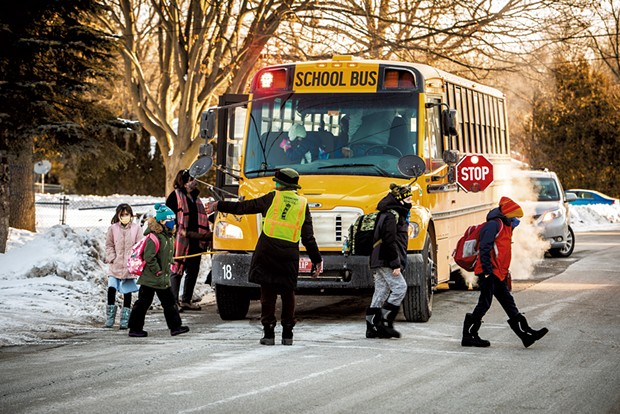 And in the past 12 months, she has never been more on her feet. Although she couldn't have predicted the indispensable role she would play during this moment in history, she was uniquely prepared. Less than a year before the pandemic, she'd earned a master's of public health from the University of Vermont, where she studied pandemic crises and everything from contact tracing to mitigation strategies to contain infectious disease.

It's training she now uses every day, including on the day of this mid-February interview, when she'd been alerted early that morning that someone in the learning community had tested positive for COVID-19. Without hesitation, she knew exactly what to do. The superintendent was notified and Farrell, the principal and administrative assistant dove into contact tracing logs, which each teacher keeps in a binder. They spoke with all close contacts before school opened that morning, instructing them to quarantine, and followed up with an email with additional details. Another email was sent out to the whole school community.

"I've been a big proponent of the schools opening from the beginning, and we're doing great. We have been keeping everyone safe and it's because of all the protocols, the contract tracing and being quick reacting," said Farrell.

Principal Holly Rouelle said school nurses are one of the main reasons schools have been able to stay open. Farrell, Rouelle said, works long hours, including weekends, and is in regular communication with pediatricians and school nurses across the state.

"Nurse Farrell is like Wonder Woman. Before the pandemic she was definitely a vital part of our team, and now she's really like my coprincipal," said Rouelle. "It's a huge job, and she does it with a smile on her face."

The Vermont State School Nurses Association started planning for school reopening just two weeks after the pandemic hit. Each school had their own reopening committee that met weekly throughout the summer. Chamberlin redesigned the flow of traffic in the parking lot and created staggered drop-off and pickup times. The school also instituted temperature checks, screening questions and other safety measures. Students currently attend school in person four days per week. Farrell is hopeful that after April break students will get to spend the rest of the school year fully in person. 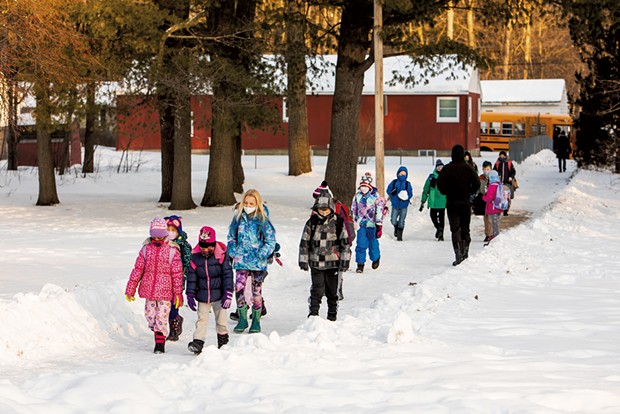 "Everything has changed. There's really not any aspect of school that is the same," she said. This year, there are no assemblies, students eat in their classrooms instead of the cafeteria, and they must remain spaced out and in their homeroom pods during recess. Despite the new restrictions and the mask requirement, Farrell said students have shown resilience.

"They have risen to the challenge and are just glad to be in school," said Farrell. "It would bring tears to your eyes how well the kids are doing [with the changes]."

Farrell said the beginning of the school year is always a challenging time as she checks immunization records, goes over individual health care plans for kids and trains teachers on how to address their students' medical needs. Managing COVID-19 added to her already full plate.

"I would say September was the most stressed-out month I've probably ever had in my entire life," said Farrell. In the past, she would assess whether dehydration, hunger or stress might be causing a student's headache or stomachache and treat that first, but now she must immediately send them home.

"I would normally try to get to the bottom of a stomachache because I want to keep kids in school. But it's very different this year," she said.

Farrell said she is looking forward to the day when the school can gather in the gym again, especially for the Buzz, a talk show she cocreated and performs in with kindergarten teacher Christina Brown. Before the pandemic, the duo dressed up in bumblebee costumes, tap danced and led community-building activities such as game shows to introduce kids to new teachers. Their bee costumes were inspired by the Hive, the school's reward system that is displayed prominently in the lobby. By demonstrating respect, responsibility and safety, students earn pom-poms that represent honey cells, which translate to special celebrations such as Pajama Day.

"I miss the connections with the kids. I'm not allowed to hug them, so that's hard," she said.

But Farrell said the pandemic has had an upside. The school hasn't had a single reported case of strep throat or lice this year. It's also brought recognition to the school nursing profession.

"The job has never been [just] ice packs and Band-Aids, ever. It's always been this very dynamic job of doing a thousand different things," she said. "[The pandemic has] brought school nursing into the light [so] that the world can see what an important part of education we are. That's a really prideful thing for me."