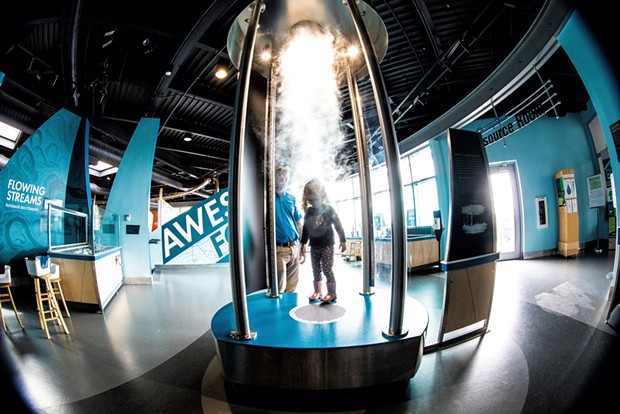 As the STEM & Exhibits Project Manager at ECHO Leahy Center for Lake Champlain, Colchester resident Chris Whitaker is responsible for designing and improving exhibits at the lakefront science center. The latest exhibit, "Engineer It!," includes a vertical wind tube where guests engineer materials they can fly, a shake table to investigate structures that can withstand an earthquake, and a station where guests discover the power of pulleys as they lift their own body weight. Whitaker designed the shake table and wind tube himself, and he improved upon the pulley station by adding an adaptive seat for kids with special needs. To inform his work, he has drawn on experience as a wildlife biotech and invasive species coordinator with the U.S. Fish and Wildlife Service at Parker River National Wildlife Refuge in Massachusetts and later as a middle school science teacher. But these days, it's his role as Dad to 4-year-old Charlotte and 9-month-old Maeve that inspires him most when he's on the job.

On having an at-home tester

Any activity I come up with, I'll often bring things home from the museum, and Charlotte and I will just play with them — if for nothing more than to watch how she interacts with things. It gives you insight into the play that children do, and that's really important because playing is learning. If I bring out something she's never seen before, she has no preconceived notion as to what to do with it. So, it's always fascinating to see what it becomes, and then to just live in her world for a little bit.

How his approach to parenting and work intersect

I think it's really important to create an environment where [kids are] allowed to play and explore and experiment, because that's where new and inventive ideas come from.

On the benefits of experimenting

Kindergartners will come up with some of the best solutions because they just will try anything. It's a constant learning process, and that's part of what I love about working here at the museum — [that] it's always changing, it's always different, and even the educators are always learning.

On ECHO's focus on the five steps of the Engineering Design Process: define, plan, create, test and improve

It's an iterative process. You're constantly trying to come up with a better solution. I have a problem I want to solve, an activity I'd like to create. And then I put it out on the museum floor, and often what I will discover is that people won't use it anywhere close to how I thought they would. Sometimes, it's in amazing ways, and sometimes things just break. So I'm constantly seeing how guests react to them and then going back to the workshop and rebuilding them to improve things. And that's part of what we like to teach, too — in order to really learn and understand things, you have to fail and then try to make them better.