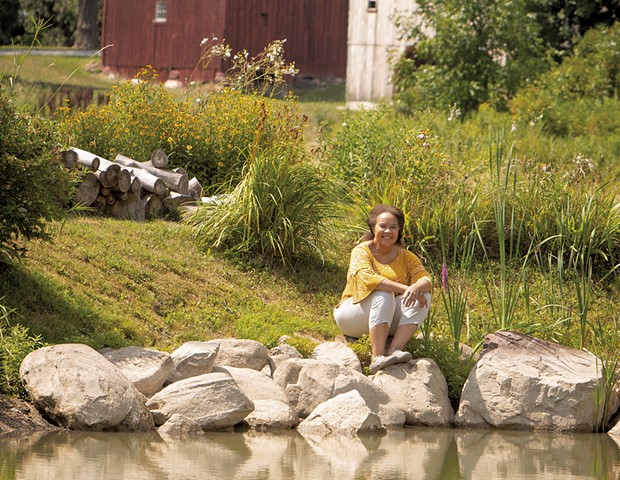 What follows are distilled quotes from a conversation with Charlotte resident Dr. Lydia Clemmons. A medical anthropologist who spent 35 years working in Africa, Dr. Clemmons now does that job remotely with quarterly trips to Africa while also volunteering as president of Clemmons Family Farm.

On moving back to Vermont eight years ago and becoming president of Clemmons Family Farm:

The farm has always been home. That's been the anchor. It's always been my parents' dream. The little gray building was my mom's shop, the Authentica African Art Imports shop. They were really hunkering into their heritage, to their love for Africa, for art, for community, for family. [My mom] used to put her African art — like masks, fabrics, drums, all kinds of cool things — into the back of her station wagon and drive all around Vermont to go to schools and go to K-12 classrooms and teach kids about Africa. In our family, there's always been a focus on young people. You can make an impact by going out and marching on the street, or you can make an impact by having a really good conversation with a neighbor and having a real connection and building an affection across differences of race. So there are different forms of activism. This is ours.

On one of the proudest moments in her career:

I was based at Johns Hopkins University working for an affiliated organization, jet-setting around higher levels of ministries of health [and] large global programs, and really missing the rural communities. So I quit that job and took a job with a Black-led nonprofit organization called Africare and moved to Mali. They dropped me off in a little village to start my work. It was a little adobe hut. No running water. This massive dust storm engulfed the little adobe hut, and I woke up the next morning and found half my luggage and clothes had been eaten by termites. It was all brown, dry dessert. But then you start becoming very attuned to the people and the culture, which is so vibrant, so rich, so colorful — and literally colorful in terms of the visual arts.

I was there to coordinate and lead a maternal and child health program. Africare had recently built a beautiful maternity ward for women to come in and deliver their children, instead of delivering at home, because there were so many maternal deaths. But no women were going. And one of the reasons, we found out after doing research, was that just discussing pregnancy was a taboo topic. The traditional clothing was very loose-fitting — large, billowy gowns. So you might not even realize a woman is pregnant until she's just about ready to deliver. There are traditional undergarments [called pendelu] that [only married] women wore. After we did our research, we came upon the idea of using this pendelu, which was white, as the key to help husbands and wives start communicating about pregnancy.

We decided to take the white pendelu and dye it green. The Mali landscape during the dry season was brown everywhere, [but during] the rainy season it looked like the greenest part of Vermont. That's when it's all about crops and agriculture and fertility. So we're like, Green is the color.

So we dyed the pendelu green and did a whole campaign around the green pendelu. We hired storytellers who are called griot. They are like spoken-word artists and are the only people in the community allowed to say certain things. They made a whole song about the green pendelu that was coded to say: If you see the green pendelu, it means your wife is pregnant and you need to make sure she eats more fruits, vegetables and meat, and bring her to the health center so she can be examined by a nurse.

Within a week, suddenly women were coming into the health center.