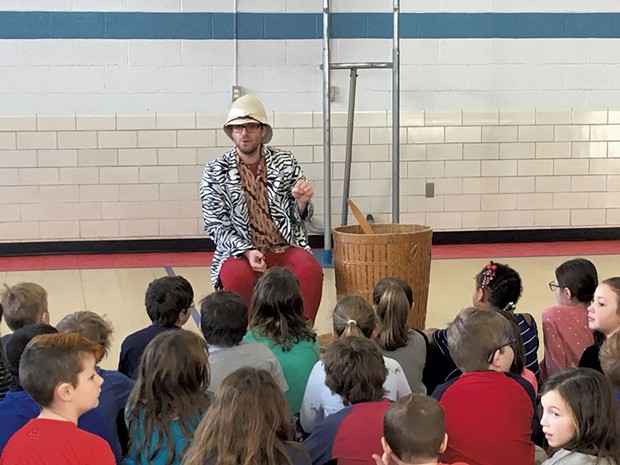 Before the pandemic, elementary school children interested in learning about the instruments of the orchestra could gather round Toby Aronson, the "zookeeper" of the Vermont Symphony Orchestra's Musical Petting Zoo. Aronson used to visit 10 to 12 schools a year with more than a dozen instruments in tow. After listening to his boisterous spiel about the string, brass, woodwind and percussion instrument families, students could line up for a chance to whale away at a trombone, clarinet or whatever struck their fancy. Imagine the airborne droplets in that room!

Inspired by the no-longer-possible Petting Zoo, the VSO has come up with the best imaginable alternative: Musical Chairs, a series of five virtual classes for K-6 students. The 45-minute videos are currently being released on the organization's YouTube channel every Tuesday. They started on October 27 and will be posted every Tuesday through the end of November, but they can be viewed at any time. And they're free.

Filmed at different kid-friendly locations — including the Bixby Memorial Free Library in Vergennes and the Vermont Teddy Bear Factory in Shelburne — the classes are hosted by Aronson but explore the orchestra in greater depth than Petting Zoo sessions. Each of the first four is dedicated to one instrument family, and the fifth will feature orchestral guest instruments such as the piano, accordion, saxophone, guitar and harp.

And Musical Chairs will reach more people than the Petting Zoo could, noted education and ensemble coordinator Patricia Jancova, who wrote the episodes' scripts and is helping to edit the classes with video producer Justin Bunnell of RetroMotion Creative. 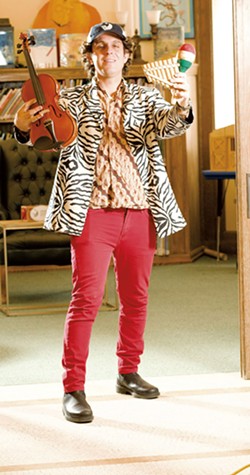 "I think the fact that the platform is open to the public, not just schools, [means] it has the potential to reach a lot more of the community online," Jancova said.

Musical Chairs classes are all about fun. They begin with an animation created by students in Northern Vermont University's department of animation and illustration. They feature actual VSO musicians talking about their instruments and at least one school-age musician demonstrating their chops. (The string-family class features 9-year-old violinist Mia Chen of South Burlington.)

Each episode also highlights a non-Western instrument from the same family. For the string class, it's the Nepali sarangi, an instrument that rests on the knee and is played with a bow. The idea is to reflect the musical traditions of groups of people from other countries who live in Vermont.

For a hands-on component, each episode teaches its young audience how to make an instrument out of household materials. According to Jancova, the brass-family class will introduce the soda-bottle trumpet, with a mouthpiece cut from the top of a plastic bottle, a paper-towel tube for the body and a construction-paper funnel for the bell. And every episode ends with musicians playing a version of the Vermont state song, "These Green Mountains."

Educational videos about the orchestra are nothing new; indeed, they date back at least to Leonard Bernstein's televised "Young People's Concerts," which ran from 1958 to 1972. Jancova, who has been creating online content for the VSO since the pandemic hit, thought carefully about how to distinguish Musical Chairs from the other "millions of videos about the orchestra."

What sets the VSO's series apart, she said, is that "it's Vermont [venues], it's our musicians, it's the students who are from the state, it's 'These Green Mountains.'"

For his part, Aronson enjoys his new role as master of ceremonies. The classical guitarist and parent of a 2-year-old daughter uses the same entertaining "zookeeper" persona that he brought to school visits, even introducing the brass family in the same way — by buzzing his lips on a conch shell.

Now, though, said Aronson, "I get to interview experts who actually play in the VSO. It's a reminder of how talented these musicians are — they're playing 'Twinkle, Twinkle' in the highest register possible, or playing really fast. It's fun making their talents accessible for kids to check out."