by Cheryl Brownell and Alison Novak

School's out, and Day-cations are in. Every summer, Kids VT seeks out family-friendly destinations where you and your kids can experience the natural beauty and unique culture of our region. They're all places you can visit in a day.

Each of our three summer issues features two recommended trips, complete with tips on nearby dining and attractions. This month, associate editor Alison Novak took her family to beaches, markets and a fossil preserve in the Champlain Islands, while business manager and contributor Cheryl Brownell and her kids caught some air on the mountain coaster at Okemo Mountain Resort.

Looking for more day-trip ideas? Read the rest of our award-winning Day-cation series.

As a mother of two teenagers, I often come up with brilliant ways to spend time together as a family — which my kids summarily shoot down. So when I texted my 16-year-old son, Lathrop, to ask if he and his 13-year-old sister, Guinevere, would like to check out the Timber Ripper Mountain Coaster at Okemo Mountain Resort, and his response was "Uh, YEAH!" I practically pulled a muscle patting myself on the back. 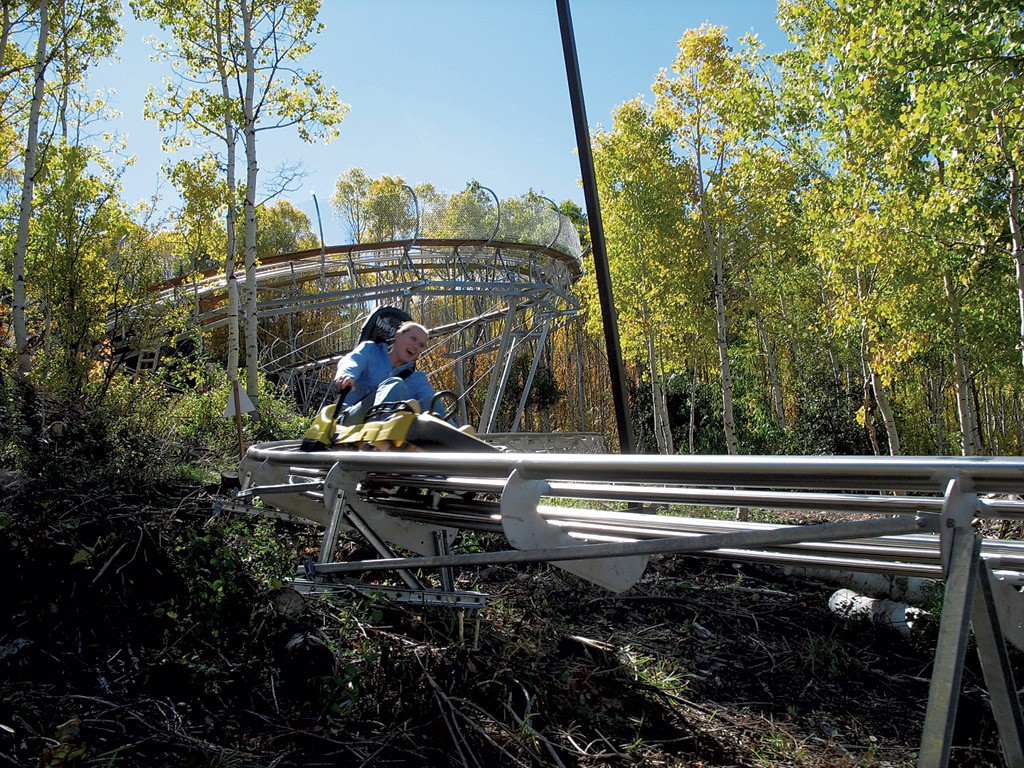 The Timber Ripper, which opened in 2012, is the resort's four-season answer to Vermont's increasingly unreliable snowfall. Passengers careen down the mountain in sled-like cars, riding solo or with a partner. Each car is mounted on tubular rails and equipped with hand brakes so riders can control their speed as they descend 375 vertical feet into the Jackson Gore base area.

My kids and I — and Lathrop's friend Tyler — piled into our station wagon and drove about an hour and a half to Ludlow from our Vergennes home. We bought $54 wristbands to the Adventure Zone, which got us three rides each on the coaster, plus access to disc golf, a climbing wall, the pool and fitness center, and all the other attractions — except for the Haulback Challenge ropes course and the zip line. That was disappointing.

We made a beeline to the Timber Ripper. Lathrop and Tyler each hopped in their own car, but Guinevere decided, at the last second, to ride along with me.

I'd had doubts about the coaster's safety, but I stopped worrying once we started moving. Slowing down the cart was easy. And bringing it up to full speed — 25 miles per hour — required a conscious effort.

Our cars climbed uphill for five minutes, then whizzed down the 3,100-foot track in about three, gliding through dips and around corners. It was every bit as fun as we had imagined. The mountain views were spectacular (if somewhat blurry from our vantage point). It was thrilling — and a little scary — to watch rock ledges fly by below us. At the bottom, we resisted the urge to get right back in (the pretty short) line.

Instead, we wandered over to the AMP Energy Big Air Bag, a 30-by-50-foot inflated cushion typically used for freestyle athlete training. In the summer, visitors leap onto the bag — one by one — from scaffolding.

By the time I got there, Lathrop and Tyler had already made the 10-foot jump from the lower of two levels. Lathrop jumped in a free-fall style; Tyler did a cannonball. After each of them landed, they stood up, fell down and then rolled off the bag, giggling and fist bumping before queuing up again to jump off the 30-foot level.

Soon it was my turn. You have to jump off the lower level before you graduate to the higher one. On my first jump, I landed with my right leg locked and twisted my knee a little. The operator must have noticed my awkward landing because when I tried to make my way to the next level, he stopped me. I'd have to jump again at the lower plank, he advised. So much for keeping up with the teenagers.

When I finally made it to the higher platform, I was shocked to discover how high up it seemed. But my ego quickly pushed my fear aside and I hurled myself off the ledge, falling for what seemed like an eternity before landing comfortably — and successfully — on the giant cushion. I decided to quit while I was ahead and headed back to the Timber Ripper with vows to use the brakes as little as possible.

After a quick game of mini-golf and a turn at the bungee trampoline, the kids ordered burgers from the Waffle Cabin at the base area. They were nothing special, but at $6 each, they didn't have to be.

In a moment of weakness, I let the boys buy tickets to the ropes course. I imagine Okemo relies on parents like me to adopt the "in-for-a-penny-in-for-a-pound" mentality and fork over another $39 a head for additional activities.

To get to the course, we crossed a rope bridge over a clear mountain stream wending through the woods. I was dying to kick off my shoes and step into the stream but suspected the resort might frown upon freestyle wading.

The ropes course consists of three difficulty levels. A ticket entitles you to a round at each level plus a bonus round through any level of your choice. Just like with the big air bag, everyone is required to do the lower levels first.

Tyler and Lathrop made easy work of the first two — though they had to wait for a young boy at the second level who decided mid-bridge that he was in over his head. Spectators cheered him on, but the kid was still frozen, so an employee cheerfully assisted him through. The third level was sufficiently challenging for Lathrop and Tyler.

All told, we spent about three hours at Okemo. We would have stayed longer, but with limited rides on the coaster and use of the ropes course, we'd run out of fun stuff to do. As we walked back to the car, Lathrop said, "We should definitely come back with Dad. He'd love the mountain coaster." I think he's right. Plus, what parent can pass up an invitation from their teenager to hang out?

"Do you have the rain jackets?" I called to my husband, Jeff, as we prepared to embark on a trip to the Champlain Islands on a windy, cloudy Sunday. Luckily, he did, because 45 minutes into our drive from Shelburne, raindrops began to hit our windshield.

"Welcome to the wet beach," a woman in a booth proclaimed as we pulled up to the entrance of Alburg Dunes State Park, which is marked with three large driftwood pillars, one in the shape of a horse head. Thunderstorms were likely, she confirmed, but the water was a balmy 70 degrees. Jeff promptly stripped down to his suit and dove in. Our kids, Mira, 7, and Theo, 4, followed his lead.

For about half an hour, the three of them frolicked in the surf, dunking each other and having a blast. I wasn't feeling quite so gutsy; I watched from the sand, wrapped up in my jacket. Walking down the long, mostly deserted beach, past dozens of picnic tables and flocks of sea gulls, I felt like we had driven to the shores of the Atlantic instead of Lake Champlain — except when it came to the "dunes," which weren't nearly big enough to rival ones you might find at the ocean (see sidebar on page 28).

When the rain picked up, we made a family decision to turn back instead of exploring the area further. But we returned the following warm and sunny Saturday for a full day of islands adventure.

By the time we crossed the causeway a second time, it was nearing lunchtime, so we stopped at the Champlain Islands Farmers Market in Grand Isle for provisions. It's small compared to the Burlington Farmers Market, but we were pleasantly surprised by the selection and prices. 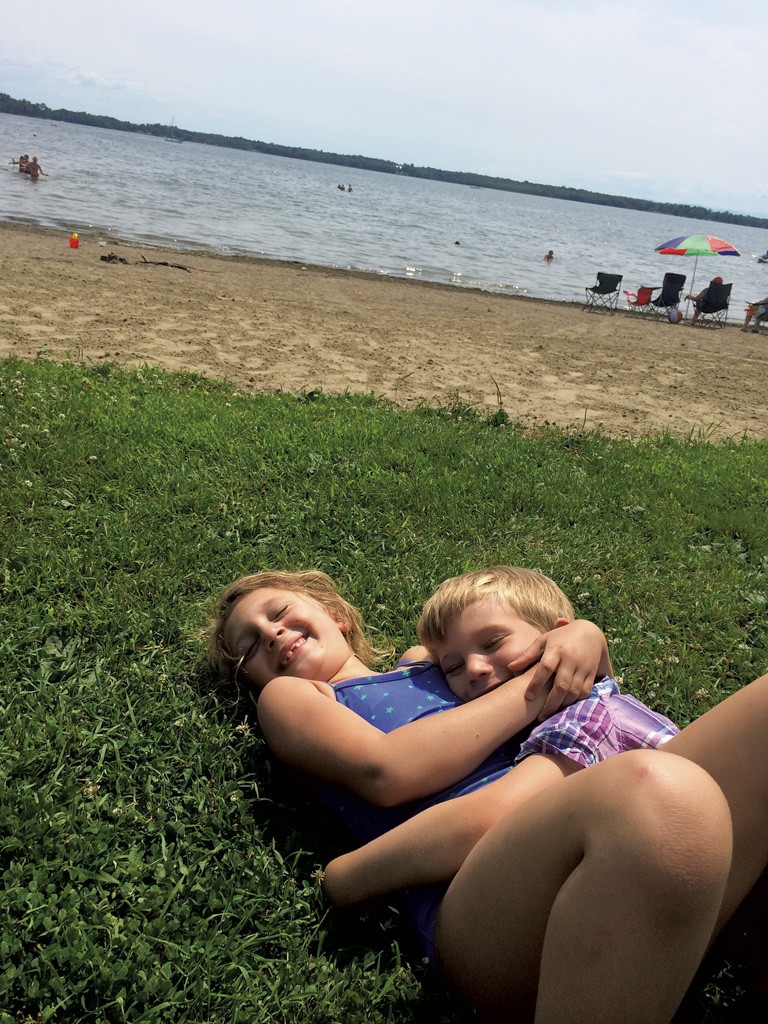 The kids noshed on cider doughnuts as we perused the offerings, tasting samples of pasta salad and goat cheese. We ordered noodles and chicken fingers to go from a market stand called Asian Island Fine Cuisine and brought the food a short drive down the road to Knight Point State Park.

The park was bustling with a kid's birthday party, and we could hear the cars whirring by on the nearby road. The beach itself was small, so we set up a picnic blanket on a large grassy area by the sand. After lunch, we took a dip in the shallow water and played monkey-in-the-middle and soccer on the grass.

Then we packed up the car and continued north, stopping at North Hero's packed-to-the-gills Hero's Welcome general store for ice cream. Sitting on the curb, licking an ice cream cone and looking past a couple of old-fashioned gas pumps to the lake, I was hit by some major nostalgia. 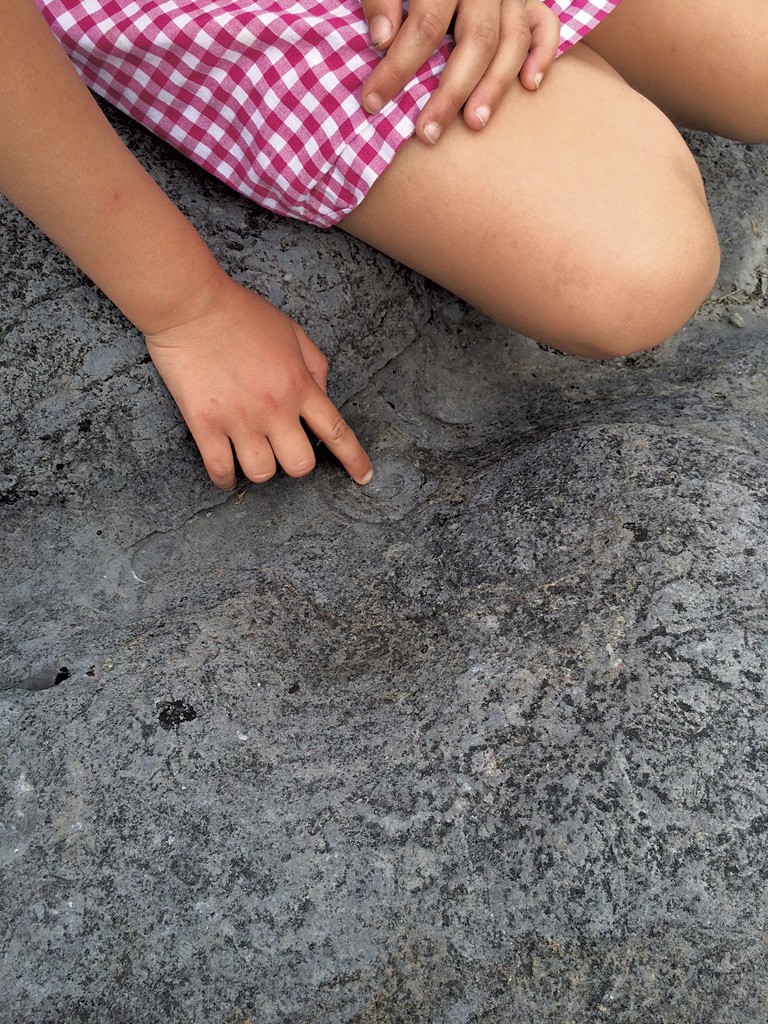 We stepped even further back in time at the Goodsell Ridge Fossil Preserve on Isle La Motte. In the preserve's visitor center, I watched a short video explaining the history of the area: Four hundred eighty million years ago, an ancient ocean covered the land we were standing on. The evidence? Fossilized remains of marine organisms such as gastropods, cephalopods and trilobites have been found on rock outcroppings there.

The historical details were a little over my kids' heads, but they enthusiastically explored the 81-acre preserve, stopping to look for the mysterious swirls, curves, circles and waving lines on the rock, indicating ocean life had once been there.

The preserve has a couple of short trails. We picked a one-mile loop where an educational exhibit called "Walk Through Time" is on display until October. The exhibit consists of 71 illustrated panels describing 4.6 billion years of the evolution of life on Earth, with each foot representing a million years in geological time.

Using that scale, we learned in the introductory panel, a human lifetime is represented by .001 inch. Jeff and I talked about how insignificant we are in the grand scheme of things as the kids ran ahead, not yet burdened by such weighty thoughts.

We finished the short hike around 5 p.m. The bugs were starting to emerge, and we were all a little hot and sticky.

As we headed home, we saw the turnoff for Alburg Dunes up ahead and debated a final stop. It had been a long, busy day, and we were tired. But the thought of one last dip in the lake sounded heavenly — and we had nowhere better to be. So we headed back to the beach.

The scene was totally different from our last visit. Even this late in the day, extended families barbecued, older couples sat under beach umbrellas and kids frolicked in the shallow pools by the sand.

We quickly changed back into our swimsuits, and Mira and I ran into the water holding hands. We dove underneath.

"This is the life, isn't it?" Mira said, as we floated on our backs, taking in the beautiful surroundings.

"Yeah, it is," I said. It really doesn't get any better than summer in Vermont. K