Tuned In: A Radio Family on Splitting Shifts, Turning in Early and Being Recognized 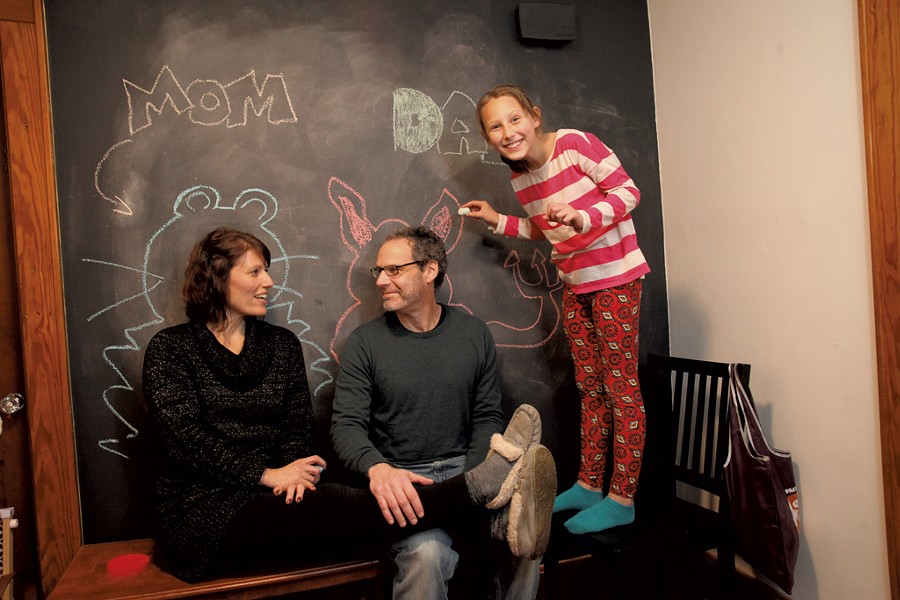 A fire blazes in the Wertliebs' South Burlington living room as 9-year-old Gretchen plays dominoes on the wood floor and 6-month-old puppy Fezzik cavorts nearby. The family has already eaten and cleaned up dinner. Although it's only 6:30 p.m., Gretchen will soon begin her bedtime routine — bath, teeth-brushing and a half-hour of independent reading — before one of her parents, mom Erin or dad Mitch, tucks her in. Not long after that, the grown-ups will head to bed, too.

For the past 15 years, Mitch has been the host of Vermont Public Radio's "Morning Edition," which airs on weekdays from 6 to 9 a.m. He starts his day around 4 a.m. Erin stayed home with Gretchen when she was younger, then volunteered and worked at her school for several years. Her current 8:30 a.m.- to- 4:30 p.m. job in the University of Vermont's Department of Education means she's able to cover the morning shift at home with Gretchen. Mitch gets home by midday for the after-school shift, making for a well-balanced arrangement.

On the role of radio:

Erin: Yes, we have it on, but I do turn it off once we sit down for breakfast, since you never know what's going to be on there these days! I listen to it all the time, and I did – even before I met Mitch. I have it on early in the morning, before Gretchen gets up, and then soon after [she awakes], I turn it off.

Mitch: I talk about [Gretchen] on the air when I probably shouldn't. She'll just come up at times, and every year on her birthday I say, "Happy Birthday, Gretchen!" and I play "My Girl," and it's really nice.

Mitch: You never hear it?

Erin: Part of our family tradition is the birthday interview. (It's not aired.)

Mitch: The first time I took [Gretchen] into the studio, she must have been 2 or 3, and you just hear her talking about the buttons. I thought it would be cool to do it every year and have that time-lapse progression over the years, and now it's become our tradition.

Erin: It is such a part of our family now.

Mitch: It's so nice that I get daylight in the wintertime! For so many people, you get up in the dark and come home in the dark. I love having that afternoon walk with the dog. He's a puppy. He needs to get tired out.

Mitch: If I was a better cook, I would do it. Although I do my famous omelettes from time to time.

Gretchen: I love the famous omelettes!

Mitch: Wednesday night is usually the night I do omelettes and [tater] tots. In the summer, I grill a lot. When Erin is on a girls' night out, we will have mac and cheese. I am not a great cook, but I do help clean up!

On being a parent and a journalist

Mitch: If I am interviewing somebody, and before we actually talk about something, we will talk about kids and start to have this rapport. "Oh, how old is your daughter? How old is your son?" It's amazing how you can relate to people that way. It feels good. I find that it actually helps with my job. It gets people to loosen up a little bit and speak to me like a regular person before we start an official interview.

On being approached by radio fans:

Erin: I should probably answer this one because he is going to do the whole modesty thing.

Mitch: It doesn't happen very much.

Erin: It does happen. It doesn't happen every day, but it happens! More frequently than he's letting on. He is always very gracious.

Mitch: If it does happen, I thank them for listening, and it makes me feel good. It would definitely bother me more if I was on television. I wouldn't want that kind of exposure. Occasionally, someone recognizes my voice or my name and it's just at the level I like it!

Erin: People comment to me about the sports report and say, "I sure liked Mitch's report on the Yankees!" Sometimes [Gretchen's] teacher or the staff at her school will be like, "Oh yeah, I listened to your dad this morning."

Know parents we should interview? Email us at ideas@kidsvt.com.