The Pros and Cons of Virtual Music Lessons 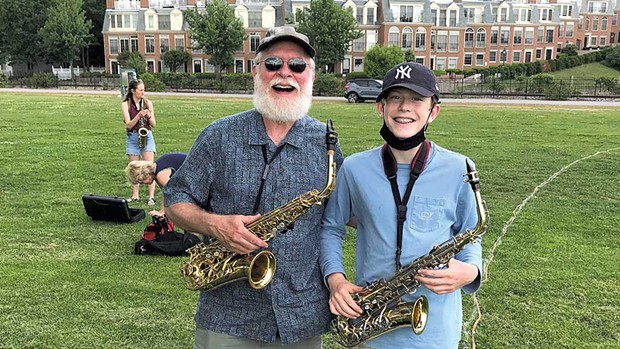 I was in the kitchen making dinner recently while my son, Leo, had his trumpet lesson in the living room.

I watched him hold the instrument to his lips, then blow a note into the air.

"Leo, Leo," a voice immediately called out, "hold on a second."

The note died. Leo, 10, turned to the tiny, headphone-wearing figure on my wife's iPad — his trumpet teacher, Jason Whitcomb.

"Is the Original Sound on?" Jason said.

I was chopping onions like an actor in a silent movie so I couldn't be heard by the iPad's surprisingly sensitive microphone. I dropped the knife and ran into the living room.

Now, I don't quite know what Original Sound actually does, only that it's very important in Zoom land, and I always forget about it. I fiddled with the iPad, clicked on the Original Sound, waved to Jason, then went back to my onions.

Welcome to the world of virtual music lessons. I know it well.

When all contact with the outside world ceased during the pandemic, somehow, the music still played. Every other week, we'd click on the Zoom link at the appointed time, and voila, either Jason, Leo's trumpet teacher, or Craig Olzenak, my son Felix's saxophone teacher, was there waiting, smiling, ready to teach. The lessons were consistently fun and thoughtful. The sound quality was decent. There was no commute. And I could cook dinner during the lesson. It all seemed rather miraculous.

Original Sound gaffes and occasionally spotty Wi-Fi not withstanding, my kids have enjoyed their virtual lessons. And my wife, Shannon, and I have been grateful to keep this part of their lives consistent.

"I was surprised how much I liked it," Felix, 13, told me, "how similar it felt. Craig and I picked it up really quick and were able to just keep doing what we were doing before."

"It's cool that you can stay home and do it in your living room," Leo added. "You don't have to worry about being late. But it's a little distracting if my dog barks."

Ah, yes. The dog. Even with teachers as excellent as ours, all things virtual have their limits. As we've all learned by now, videos freeze, dogs bark, faces look pretty weird on Zoom, and nothing can replace the connection of being in the same space with other people.

The most obvious limitation to virtual lessons is the loss of one of music's central components and greatest gifts: playing together.

"Not being able to play along with students has been very tough, as it creates a bond like nothing else can," Jason said. Jason, who lives in Colchester, is an affiliate artist at both the University of Vermont and Saint Michael's College, and he also teaches in the South Burlington School District and at Harwood Union High School.

Additionally, he and Leo have learned that the trumpet, an instrument dependent on subtleties of lip position and breath control, presents unique challenges to virtual learning.

"Teaching someone to hold the instrument and make an embouchure are not as easy when only describing it," Jason said.

Leo agreed. "It would be a lot easier in person because he could show me what to do on the trumpet."

And though virtual lessons, at least in theory, give students convenient access to teachers anywhere in the world, there has been some pandemic attrition, according to Craig. "I have lost a number of students these past 15 months, and I'm sure I'm not alone," he told me. "I'm keeping my fingers crossed that music-making on all levels will come back strong this coming fall."

A Burlington resident, Craig has spent nearly 50 years teaching in a wide variety of settings: Burlington middle schools, Northern Vermont University-Johnson, Grinnell College, and even in Spain. He said he has also missed being able to give his students hands-on support with their instruments: reed placement, assembly, disassembly and cleaning.

Luckily, as Vermont surpassed the 80 percent vaccination threshold, it seems there's light at the end of the Original Sound tunnel. Leo's trumpet lessons are about to become a hybrid of in-person and virtual, and Felix and Craig recently reunited to perform together as part of "50 Saxophones" for the opening night of the Burlington Discover Jazz Festival.

Though I can't deny I'll sort of miss being able to cook while my kids have their lessons, I'm excited to get them back side-by-side with their amazing teachers.

"I'm looking forward to playing together in the same room," Craig said. "Looking at one music stand, making music. How sweet!"

Jason couldn't agree more. "The connection I feel with my students and music is something that makes this profession so rewarding," he said. "I look forward to giving my students a high five and playing music together. It has been way too long."