The Art of... Tinkering

Give a kid an assortment of washers, wire, buttons and string, and chances are she'll spontaneously begin creating, no instruction required. That's the ethos behind the Tinkering Project, which encourages kids to use familiar materials to make new things.

The initiative is run by Vermont Afterschool, a public-private statewide partnership that supports innovative learning opportunities for kids that extend beyond the school day. With a grant from the Silicon Valley-based Noyce Foundation, Vermont Afterschool has brought tinkering-themed afterschool classes to 24 Vermont schools over the past two years. Norwich's Montshire Museum of Science trains staff, who experience firsthand the excitement and frustration of tinkering.

Kits on topics like circuitry are provided to participating sites, but the initiative encourages using recycled materials, like scrap paper and nuts and bolts. Tracy Truzansky, Vermont Afterschool's project manager for training, describes tinkering as the "beautiful intersection between science and art." In a world so heavily "planned or programmed," she says, the open-ended, child-centered activity offers children the freedom to "mess around with stuff" without rigid guidelines or rules.

Through making things, students explore scientific concepts. By building a spinning top from bolts and washers, for example, kids begin to understand center of gravity. By playing around with a battery, wires and a motor, they learn about electricity.

On a recent Tuesday afternoon, a dozen third through sixth graders at Hardwick Elementary School's Afterschool REACH! Program were offered two tinkering project options: build a tower that can hold a book six inches above the table, or design a six-inch long bridge for a Matchbox car. The tricky part? The students could only use paper, tape and scissors. 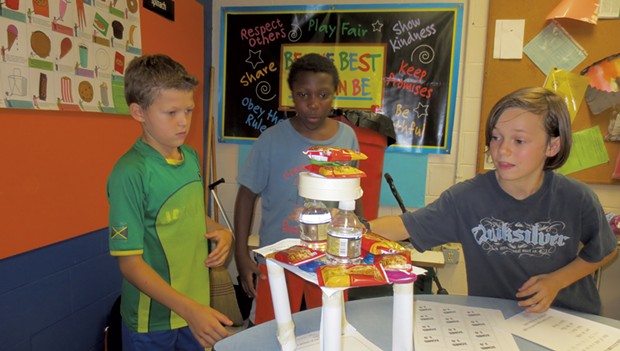 Undaunted, the budding engineers quickly got to work. One child taped together rolled-up paper tubes and said seriously, "I'm just trying to figure this out." Two others assembled a covered bridge and a road edged with paper rocks. Adults hung back, observing and asking questions like, "Do you think a little more tape would make that stronger?"

The room's atmosphere was lively with conversation and busy hands. Thirty minutes into the activity, a diverse array of projects took shape. A cluster of boys piled books, bags of chips and water bottles on a tall tower, adding items until the paper columns toppled. Another group raced Matchbox cars over bridges, comparing strength.

"It took so long," said one girl who'd just built a large bridge, "but it was totally worth it."

Surveying the creations, afterschool coordinator Nicole Miller summed up the activity's appeal: "Kids like it when there's no right or wrong answer."