The Art Of... Making a Record 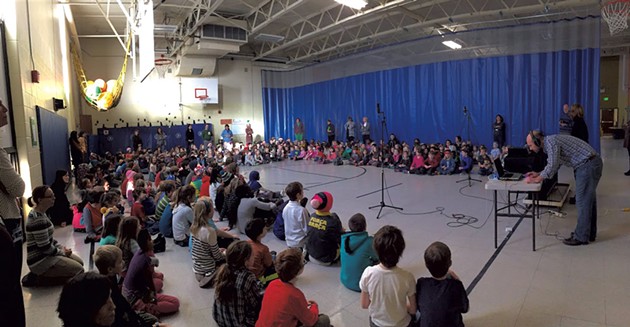 Kids usually sing songs in music class, but they don't often write them. This year, the fourth and fifth graders of Burlington's Champlain Elementary School had a chance to compose and sing their own original anthem. Titled "School, City, and Our State," it details a litany of the kids' favorite things, from winter sports to the Intervale Center.

The students wrote the song collaboratively for a special interdisciplinary music project. And not only did they write their own song, they also made their own album, which will be released at a public party at the end of May.

The project took shape after a field trip last spring. The fourth and fifth grade teachers — Sarah Legault, Aziza Malik, Kate Mattina and Shannon Roesch — brought their students to the Burlington Record Plant to see how vinyl records are made. The K-5 school and the boutique press are located just a few blocks from each other on Pine Street in Burlington's South End.

"The kids were just totally in awe of what they were seeing," said Roesch. "We were like, 'Hey, wouldn't it be cool if we could make a record?'"

The outing turned out to be the catalyst for the Champlain Voices Record Project. The concept: Champlain Elementary fourth and fifth graders would produce a limited-edition record featuring performances from every class in the school. From deciding which songs to include to hand-decorating the record jackets, the students were involved — and in charge — every step of the way.

The project came to life with a little help from the community. The PTO fronted $2,000 on the condition that the money would be recouped via donations and crowdsourcing.* Over at the Record Plant, co-owner Justin Crowther donated the raw materials, including vinyl trimmings and imperfect records, to press half of the 400 albums being made — enough for every family in the school to get one.

The record helped shape the school's chorus elective for this school year. Rather than a regular chorus, where students simply rehearse and perform, the fourth and fifth grade teachers and music teacher Betsy Greene decided the class would be multidisciplinary, incorporating design, promotions and planning. They hoped to entice more students to participate. 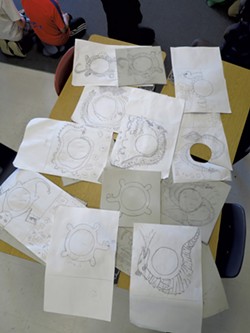 Explained Legault: "[For] some of the kids, music is not really their [thing] — but graphic arts is."

To practice the skills they would need for the record project, the students sang for residents of Grand Way Commons senior living facility in South Burlington. The kids broke into various teams in preparation for the performance. "Advertisers" made personalized invitations for Grandway residents; "surveyors" polled their classmates on which songs they'd like to sing. They also made customer satisfaction surveys that they distributed to their audience after the show. Getting positive feedback proved invigorating.

They continued to work in these teams to tackle the record. Some kids concentrated on promotions, designing posters and managing donations at school performances. Others contributed to a video documentary that will tell the story of the project from beginning to end.

A survey group found out which songs from Greene's music class each grade level would like to contribute. Each grade selected two, including "This Land is Your Land" and "These Green Mountains," Vermont's official state song.

During art club, which happens in class on Friday afternoons, the kids got instruction in linoleum block printing from parent and art teacher Carin Lilly. They used what they learned to create hand-printed images of Champ, the Lake Champlain monster, for the record jackets. 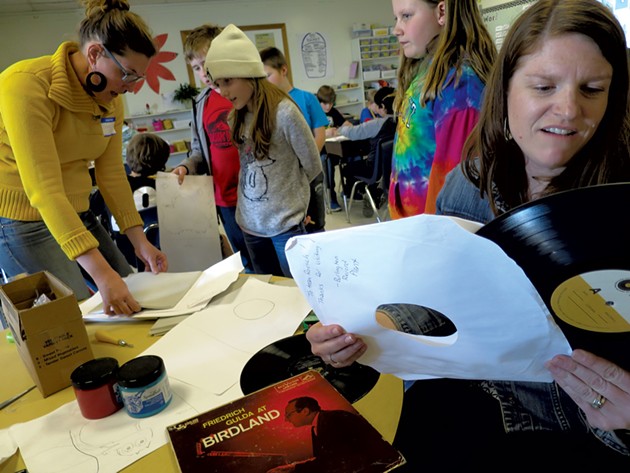 The kids and teachers enlisted Mattina's husband, Matt Saraca, to record, mix and engineer the recordings, and local musician Dan Davine to master the album. Saraca set up a makeshift studio in the music room, as well as in the gym for an all-school recording of the Champlain School Song. Greene accompanied on piano, and students added their own instrumentation on "School, City, and Our State."

Everything related to the record, from concept to execution, is based right on Pine Street — even down to the release party at ArtsRiot.

"If I was to pick one word that describes this whole project," said Greene, "it's community."

*Correction, May 2, 2017: An earlier version of this story misidentified the main source of funding for the Champlain Voices Record Project. The PTO fronted the initial $2000.

The Champlain Voices Record Project will host a public record release party on Thursday, May 25, from 4-6 p.m. at ArtsRiot in Burlington. Visit gofundme.com/champlain-voices-record-project for details.