The Art of... Active Sitting 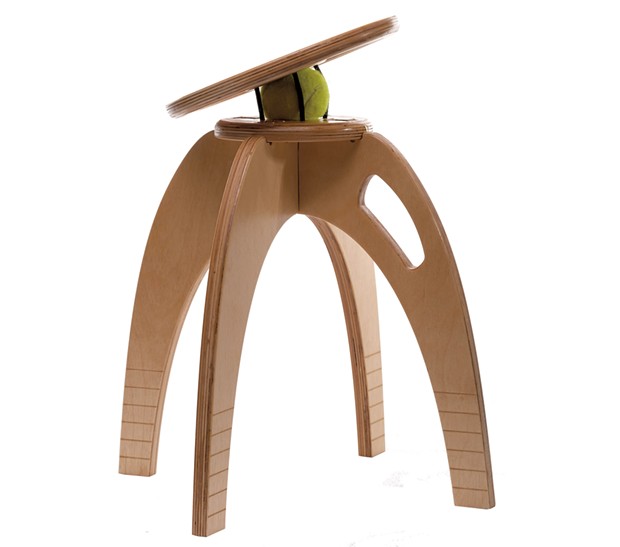 Since schools have existed, teachers have been telling kids to sit still and pay attention. But what if that pedagogical wisdom is all wrong?

That's the assertion of Turner Osler, a University of Vermont professor and former trauma surgeon and research epidemiologist, who founded innovative chair company QOR360 with his son, Lex. The father-son duo recently began making a low-cost chair for kids, called the ButtOn Chair, using the same design principles they applied to their original adult chair. Their mission with both products, says Turner, "is not trying to make a better chair," but "trying to upend the idea of what a chair is."

Since 2016, Burlington-based QOR360 (pronounced Core 360) has manufactured backless chairs that feature a patented curved, plastic disc, dubbed a RedRocker, under their seats to allow rocking in all directions. Sitting on one requires moment-to-moment adjustment of posture, which the spine does reflexively. "It just kind of feels like floating," says Turner. The chairs, which cost from $350 to $500, have an adjustable seat so users can sit with their knees lower than their hips, which allows the hips to open and spine to align in a natural, comfortable position.

The conventional chair, says Turner, provides support that distorts natural posture and contributes to a host of conditions including a weak core and back pain, which is one of the most common medical problems in the United States according to the Centers for Disease Control and Prevention.

Though back pain often has no known cause, some research supports the association between prolonged sitting and low physical activity with back pain in adults. Furthermore, sitting slumped in a chair, with the back curving like the letter C, is an improper position for the spine and often leads to back problems, California orthopedic surgeon Nomi Khan told NPR in 2018.

How about just sitting on an exercise ball? They're too squishy, aren't adjustable in height and dangerous if they pop, says Turner. Standing desks? He cites a 2017 study in the American Journal of Epidemiology that finds that occupational standing is associated with an increased risk of cardiac problems. And besides, he says, just because you're standing, doesn't necessarily mean you're moving.

Now, with more than 1,000 adult chairs sold, the father-son duo has set their sights on the youngest generation. Every day, millions of school kids sit for prolonged periods of time in chairs manufactured with just two design parameters — they're cheap and they're stackable.

There's no consideration to "making a chair that might be helpful or useful or make anatomical sense," says Turner.

So, along with a team of designers, he and Lex decided to find a way to make a chair that encourages active sitting — or, says Turner, "sanctioned privilege to squirm" — but on the cheap. The solution? An inexpensive, easy-to-produce version of their adult chair.

Their ButtOn chair, so named because its round wooden seat secured with a bungee cord looks like a button, is made with four pieces of plywood — around $5 worth — that click together with self-locking joints, no screws or glues required. In lieu of the RedRocker underneath the seat, the chair uses a significantly more pedestrian mechanism: a tennis ball. Notches in the chair's legs allow them to be sawed down for shorter kids.

This spring, Burlington sixth graders in Matt Chandler's class at Edmunds Middle School tested the chairs and provided feedback. They thought the seats were a bit slippery, so the Oslers added a textured pattern to increase friction. But, overall, they gave the chairs favorable reviews. Fifty-three percent of kids surveyed at the end of the trial period said they thought they could concentrate better while using the ButtOn chairs, and 73 percent said they would want the chairs in their classroom next year. Chandler said he's looking forward to having 16 ButtOn chairs in his classroom this school year, in addition to a dozen traditional chairs, so that his students have options.

The Oslers have also enlisted help from Burlington's ReSOURCE YouthBuild, a national program that helps 16- to 24-year-olds earn high school diplomas and acquire construction trade job skills. Under the supervision of Brian Hsiang, a YouthBuild job site instructor, program participants have assembled, sanded and varnished ButtOn chairs. Putting the chairs together "is a pretty neat process," says Hsiang, "kind of like Tinkertoys."

Fully assembled chairs, produced by Newport-based furniture maker Built by Newport, will soon be sold online for around $50 to $100, and the Oslers are in talks to bring ButtOn chairs to other local schools.

Research is still needed to determine the positive effects of active sitting, says Turner. Dr. Lewis First, chief of pediatrics at UVM's Children's Hospital, said there is some research to indicate that movement has positive benefits for kids' behavior and cognition. He cites three recent studies published in Pediatrics, the peer-reviewed journal of the American Academy of Pediatrics where he serves as editor, that note improvement in academic performance and behavior in association with increased physical activity at school.

Turner believes that practicing active sitting has the potential for long-lasting effects. Just as "a regimen of fluoride and tooth sealant has radically reduced cavities in children," he says, learning "good spinal hygiene" early may result in future generations free from back pain — all for the cost of a few pieces of plywood, a bungee cord and a tennis ball.

The Art Of Back to School Issue QOR360 ButtOn Chair