Teaching Kids About Music Through the Great Albums Curriculum 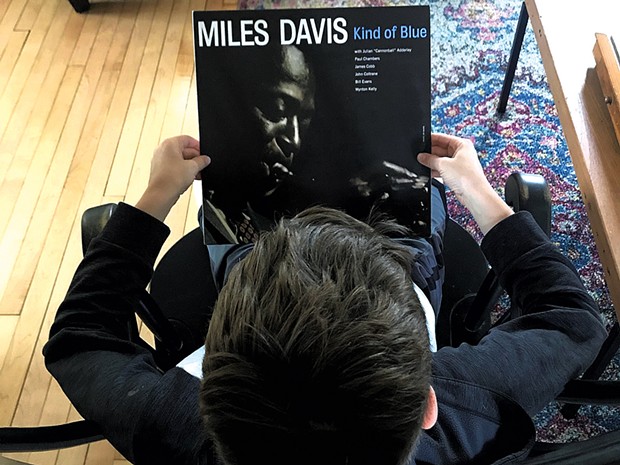 Like many parents, my first feeling was panic when Vermont schools shuttered in mid-March for the remainder of the school year. Even though my wife, Shannon, and I both have backgrounds in teaching, I genuinely wondered how we would adequately fill the school-size void that had suddenly appeared in our children's lives. I was optimistic that once teachers had a chance to organize and plan, a new form of school would take shape. But still, I was worried. What would we do with all this time?

In the end, I decided to do what I've always done when life gets hard. Turn on some music. Turn it up loud. And listen.

The Great Albums Curriculum was born.

The concept was simple. Sit down with my two sons, 12-year-old Felix and 10-year-old Leo, plus their good friend and our neighbor, 12-year-old Harper, and listen to a great album all the way through every day of the week. Hopefully, I thought, we'd come away inspired, enriched and refreshed by the healing power of sound. Voilà: music class.

Initially, we embraced randomness. In the first week alone, we listened to Pink Floyd's The Dark Side of the Moon, A Tribe Called Quest's The Low End Theory and Miles Davis' Kind of Blue. Before each session, I'd read an artist bio or share what I knew about the album. I challenged the boys to listen closely, to react to the music. But this was in the early days of the pandemic. With three months until the end of the school year, I knew we had to pace ourselves. So, I went light on analysis and reflection at first, letting the music speak for itself.

Before long, though, my teacher brain had grabbed the microphone.

"This week," I announced at the beginning of week two, "we're dedicating ourselves to Women in Music."

We listened to Aretha Franklin and talked about how gospel music helped influence soul, rock and roll, and even hip-hop. We watched videos of Aretha singing, including her famous cameo in The Blues Brothers. The following day, it was piano music by Clara Schumann, the 19th-century composer whose genius has long been overshadowed by her more famous husband. Wednesday, we fast-forwarded to the present with Billie Eilish's When We All Fall Asleep, Where Do We Go?, which all three boys conceded was "way better" than they expected. Thursday, we talked about misogyny in hip-hop and the undervalued contributions of female rappers, then pushed play on Lauryn Hill's 1998 masterpiece, The Miseducation of Lauryn Hill.

Since I was still working from home, it wasn't always easy to find the time or energy to assemble the boys in the living room for an hour each day. But with each new album, we were soothed by the ritual of sitting together and listening. Some days the boys were antsy, but they never complained. And on the day I came home to find Leo listening to Kind of Blue by himself, I knew I was on to something.

In week three, I got out my guitar and taught them about the blues and its birthplace in the American South. We talked about lineage, about slave songs and the complicated, violent legacy of American music. We listened to blues legend Robert Johnson and learned about his abbreviated life and vast influence. Then I had each of the boys write a verse to a collective original song we aptly named "The Pandemic Blues" and sang with full-throated abandon.

Week four was R.I.P Week, featuring music by Bill Withers and John Prine, both of whom had recently passed away. I took a video of the three boys swaying on the couch to Withers' "Lean on Me." I printed out the lyrics to Prine's "Angel From Montgomery," and we annotated them and talked about the sad story the verses suggested. Did I believe I was creating lifelong Prine fans right then and there? No. But there was something thrilling about watching them move toward a new way of listening.

By week five, daily Zoom calls and school assignments had filled up the wide-open days of March, and as spontaneously as it began, our daily listening came to an end.

Looking back, I can see that the Great Albums Curriculum was born from an impulse to go beyond simply making lemonade out of pandemic lemons. I knew we were fortunate to have good health and employment at a time when so many were struggling, and I wanted to use the circumstances of quarantine to create a new kind of learning for my kids, something school couldn't have replicated. It was a listening journey we wouldn't, and perhaps even couldn't, have taken at any other point in our lives.

By stepping willfully into the unexpected and making the best of what life sent our way, we learned something about resilience, too.

In the process, I'd like to think my sons picked up a helpful way to manage life's challenges that, in my experience, almost never fails.