A 10-minute health lesson teaches children how humans benefit from geting into nature and escaping the stress-inducing noise of traffic, crowds and electronics. A 13-minute arts lesson explains to kids how music can rewire the brain and help people with traumatic brain injuries learn to communicate again. An 11-minute history lesson explores how two sisters, ages 10 and 12, from the Indonesian island of Bali launched an international campaign to ban the use of plastic bags.

Creative educators are always looking for new ways to make their lesson plans more interesting and engaging. Oftentimes, however, supplemental teaching tools are expensive, time-consuming to learn, inappropriate for some age groups or difficult to incorporate into existing lesson plans.

But a St. Albans-based web platform that launched last year is giving teachers new ways to supplement their existing curricula and build new ones. The website, called Ever Widening Circles for Education — EWCed for short — curates innovative educational videos for teachers, students and homeschoolers in grades 6 through 12 and pairs them with lessons it develops for further discussion. The site is free, easy to use and focused on delivering positive, child-friendly content on a variety of subjects, including science, history, technology, art and culture.

EWCed is the educational arm of Ever Widening Circles, a free website whose mission is to publish uplifting news stories about people, organizations, inventions and discoveries that make the world a better place — and inspire others to do the same. Its motto: "It's still an amazing world."

The site was launched in 2014 by husband-and-wife team Lynda Ulrich and Chuck Verderber, both of whom are family dentists with Fiddlehead Dental in St. Albans. At the time, Ulrich was growing increasingly troubled by the number of her friends and patients who expressed feeling stressed out and overwhelmed by the seemingly endless onslaught of negative news. So she began searching the web for news sites that were free of stories about war, violence, politics and hatred, as well as those that didn't inundate users with incessant advertising.

"When I found nothing on the internet, I decided I'd write an article a day to prove that it's still an amazing world," Ulrich explained. When her daily blog posts became too unwieldy for her to manage on her own, Ulrich found someone to help build a website, and Ever Widening Circles was born.

From the beginning, Ulrich, now Ever Widening Circles' CEO — she still practices dentistry part time — envisioned the site as more than a mere ad-free aggregator of feel-good-but-empty-calorie news stories with no lasting significance. Rather, she saw it as a way to spread what she calls the worldwide "conspiracy of goodness" — positive human developments that happen every day but go largely ignored by most news outlets.

"The world is moving towards progress, but it happens at a pace that is not [considered] newsworthy," explained Liesl Ulrich-Verderber, Ulrich and Verderber's 26-year-old daughter and the CEO of EWCed. "'Newsworthy' is something is on fire, something exploded, someone died. But 10,000 people moving out of poverty today, just like yesterday, is not news."

Since its founding, Ever Widening Circles has published more than 1,000 ad-free stories culled from the web and garnered more than 170,000 Facebook followers. The site now claims nearly 2 million visitors worldwide and a growth rate of 100,000 new visits per month. The site is self-funded by Ulrich and Verderber's dentistry practice.

In May 2018, Ever Widening Circles was featured on the front page of the social media site Reddit, sending it viral and garnering 1.7 million clicks in one day. Though the site's instant fame crashed its servers, the experience proved to Ulrich and her paid staff of five, all of whom are based in Vermont, that there's a hunger for the uplifting stories they produce. 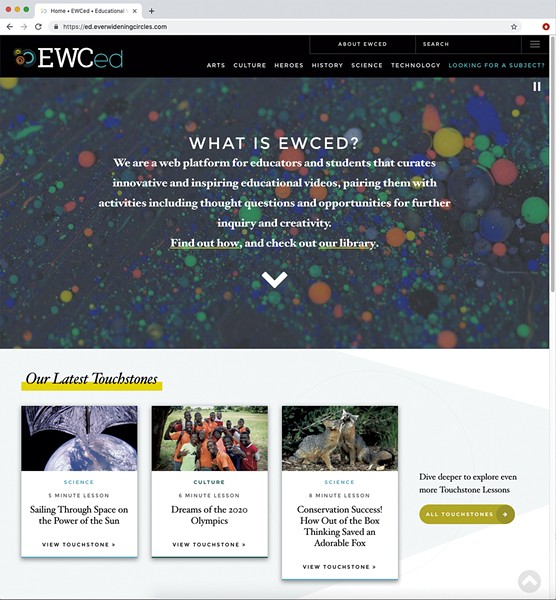 Ulrich-Verderber, a 2015 Harvard University graduate with a degree in architectural design and economics, cut her teeth teaching while working with the Leadership Institute at Harvard College. As part of her role on its outreach committee, Ulrich-Verderber was asked to develop a Saturday teaching curriculum for middle and high school students in Watertown, Mass.

Those students came from opposite ends of the learning spectrum: Some were serving detention for behavioral problems, while others were top students who wanted to take classes taught by Harvard students. So Ulrich-Verderber developed a curriculum to teach the disparate group about leadership skills.

When she asked the students what they wanted to know about becoming leaders, a common theme emerged: Many said they wanted to become more adept at public speaking. So Ulrich-Verderber tasked the students with creating their own TED Talks and gave them each three questions to answer. Kids could watch a TED Talk that she had assigned them as often as they liked before completing their classroom assignments.

"By the end of the semester, we'd gone from kids who wouldn't even stand up and say their name in front of the classroom, to them giving their own five-minute TED Talks," Ulrich-Verderber recalled. "I discovered the power that video has to give students from a wide variety of learning ranges the opportunity to really learn in-depth."

After graduating from Harvard, Ulrich-Verderber returned to St. Albans and joined her mother working at Ever Widening Circles. Soon thereafter, she began developing EWCed. She spent two and a half years interviewing students about what excites them in school — and interviewing educators about what works best in the classroom.

Early on, she pitched the concept to a friend who was a teacher. His first response was to roll his eyes. He explained that, every year, someone comes into his classroom with a new teaching tool, which takes him hours to learn and requires him to rewrite all of his lesson plans. As he told Ulrich-Verderber, "I want it to take me five minutes to know how to use it and five minutes to figure out how to put it in my lesson plan."

Another teacher offered her similar advice: "Look, I've got one chance to make this work in front of a class of sixth graders. If it doesn't work perfectly the first time, and every time, without a hitch, I've lost them."

Ulrich-Verderber took the advice to heart and made sure that EWCed was as simple to use as possible. The site is broken into "touchstones," or stand-alone lessons such as "Using Technology to Save Endangered Languages," "The Incredible Journey of Jane Goodall" and "500 Years of Women in Art." Each touchstone begins with an introduction to the topic, followed by a short video and a section titled "Why It Matters." After students watch the video, the teacher can access questions for further discussion or writing assignments, as well as other related videos.

The beta version went live last fall and quickly attracted users in almost every state. During its first year, Ulrich-Verderber worked with an advisory team from 10 schools around the country to solicit comments and suggestions from teachers and students.

Those educators included Deborah DeFrancesco, a sixth-grade teacher at H.C. Crittenden Middle School in Armonk, N.Y. DeFrancesco, a native Vermonter who's been teaching for 34 years, discovered Ever Widening Circles three years ago.

"I was hooked immediately. I just liked the whole package," said DeFrancesco, who now incorporates EWCed touchstones into her own lesson plans and shares content with other teachers at her school.

Throughout the 2018-19 school year, DeFrancesco solicited anonymous feedback from her students, which she then shared with Ulrich-Verderber. She quoted one student, who'd watched a five-minute science lesson titled "The Creature That Doesn't Die," about the hydra, a tiny organism that seemingly lives forever.

"It was fun to learn," the student told DeFrancesco, "because we are not pressured to learn it. And by being fun, we will tend to remember it and share it with our friends."

Another student offered a more succinct assessment: "It wasn't boring" — high praise indeed from an 11-year-old.

Another educator who's served as an adviser to Ulrich-Verderber and who has fully embraced the site is Jesse Bell, administrator of the Bellcate School in Essex, an independent therapeutic school for students ages 11 to 22 who have physical, emotional or intellectual challenges.

At this alternative school for students with different learning abilities, Bell explained, his teachers often develop their own curricula tailored to students' individual needs. Having used similar educational websites in the past, Bell described EWCed as the best he's found yet.

"I can't tell you how many things from EWCed have kicked off an entire quarter of learning here," Bell said. For example, his students watched one lesson called "Explore the Tiniest Museums You've Ever Seen." Afterward, they decided to build their own micro museums at Bellcate. Then, after watching a science video about Biosphere 2, an ecologically self-contained research facility in Arizona, the school hosted someone from the video as a guest speaker.

One thing that sets EWCed apart, Bell noted, are the positive and inspirational messages imbued in its content.

"That's the good stuff in education, so kids get interested in something and want to continue learning about it," he added. "For our kids, who have really tough backgrounds ... it's a nice way to lighten things up and also [share] meaningful, positive stuff that's happening in the world."

Ulrich-Verderber, who spent much of her childhood traveling the world with her parents and siblings, recognizes that most students won't get such opportunities to discover all the potential career paths open to them. So she described her mission as to "inspire students' curiosity, connect them to the wider world and give them a sense of what's possible.

"To be able to say you 'visited' Cambodia or Sri Lanka or Alaska [through EWCed] and learned about them instills in kids that they're part of something bigger," she added. "So when they grow up and become adults who consume the news, they're not just seeing the Middle East as this terrible, scary place. They've seen kids doing skateboarding in the Middle East, just like they do."