#Squadgoals: Burlington's Dad Guild Helps New Fathers Connect and Learn From Each Other 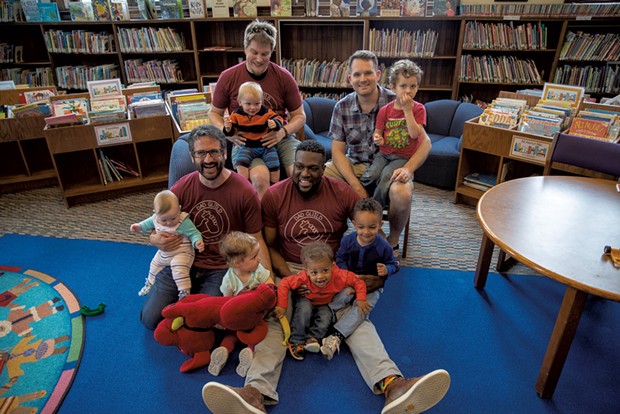 On a Friday night in May, a line of pinball machines blink and glow along the wall of a narrow suite in a nondescript building on Williston Road in South Burlington. At 8 p.m., the space — known as the Pinball Co-op — is buzzing with a few dozen mostly male patrons working the flippers and shooting the breeze, some nursing cans of craft beer.

In the midst of ricocheting pinballs and small talk, some conversations turn to topics like the efficacy of Google Calendar and the challenges of navigating childcare pickups. That's because scattered among the crowd are nine or 10 men who belong to Dad Guild, a social group started last year to connect and support dads of young children. Founder Keegan Albaugh, wearing jeans and a T-shirt adorned with the faces of his two young daughters, mingles jovially with the men — some of whom are attending a Dad Guild event for the first time.

One of the newbies is Chris Clark, an avid motorcyclist wearing a black T-shirt that reveals colorful tattoos inked on both arms. He was invited to join the group by Dad Guild treasurer Marlon Fisher, whose son goes to the same childcare center as Clark's 17-month-old daughter. Clark described himself as an involved, hands-on parent and said he was psyched to get to know other like-minded dads.

This evening outing — which gives new fathers the opportunity to connect in a casual, nonjudgmental environment — is just what Albaugh envisioned for Dad Guild.

With his dark, slightly scruffy beard and rectangular black-framed glasses, Albaugh looks the part of the typical 30-something Burlington dad. Talk to him for a few minutes and you'll learn that he's a warm and fuzzy dude who's quick to laugh — the kind of spontaneous, full-belly laugh that makes you feel like he actually might find you funny.

"I've always been a guy who's liked to talk about his feelings," he said during a coffee shop chat a few weeks before the pinball outing. A 35-year-old Burlington resident, Albaugh grew up in New Hampshire, with parents who had traditional gender roles. His dad, a geologist, "worked all the time," he said, and his mom managed the household and worked part-time as a nurse. His parents always encouraged him to be kind and taught him to see being in touch with his emotions as a positive attribute, he said. His friends were primarily female, and he watched a lot of Full House.

At Colby College in Maine, Albaugh majored in human development and family studies, which gave him the opportunity to read, think and talk about topics like adolescence, masculinity and the societal messages that boys and girls receive. The women's rights class he took prompted him to examine his own male privilege and strive to do socially responsible work. For almost a decade, Albaugh has worked at the Centerpoint School in South Burlington and Winooski, an alternative program for adolescents with emotional, behavioral or special learning needs. He currently serves as a teacher and cocurricular coordinator there.

When Albaugh and his partner, Stephanie, had their first daughter, Coraline, three years ago, he remembers being "really excited to embrace fatherhood." Stephanie was involved in activities for expecting and new moms like prenatal yoga and a VerMamas support group at Evolution Prenatal and Family Yoga Center in Burlington. But when Albaugh searched for similar opportunities to connect with new dads, he found virtually nothing.

"I was shocked — in a place like Burlington, which I consider to be a progressive place," said Albaugh. He remembered thinking, Boy, if we're not doing this work here, it's probably not being done in a lot of places.

Albaugh's hunch was correct. Though American fathers have increased the time they spend with their children on weekdays by an average of 65 percent in the past three decades, according to a 2014 report by the Families and Work Institute, a cursory Google search shows there is still a dearth of support groups and organized activities geared toward dads. Albaugh said he found few organizations that presented fatherhood in a "fun, cool" way and with a focus on community engagement.

In the Burlington area, the one group he came across was the Fathers and Children Together (FACT) weekly drop-in program at the Janet S. Munt Family Room for dads and kids, ages 0 to 8, to play and have dinner together. While open to all dads, it provides specific support to fathers on probation or working out custody issues.

When Susan Cline Lucey, owner of Evolution, wanted to launch a dads group in 2016, Stephanie suggested Albaugh as the facilitator.

Eight dads signed up for the group, called Modern Pop, which was designed to meet once a month for nine months. Each session had a theme, ranging from maintaining work-life balance to managing relationships. Albaugh would break the ice with a light, open-ended question like, "What's your favorite song?" or "What game do you like to play with your kid?" then steer the conversation to weightier issues around the new emotions and challenges that come with being a dad. To make sure no one monopolized the conversation, the men passed a "talking stick" — in this case, a wooden piece of toast from the play area.

Most of the men admitted they signed up for the group because their partners suggested it. Still, Albaugh felt like it ended up being a success. "It was cool because people were pretty open," he said. "By the end of the nine months, the dads were very connected and really sharing stuff" and eager to keep the community going.

Although a second Modern Pop didn't generate enough interest to run, Albaugh remained committed to continuing the work. Late last summer, he emailed all of the local dads of young children he knew, and invited them to join his brainstorming sessions. Over the course of three Tuesday night gatherings at the Skinny Pancake in Burlington, the men hammered out a mission statement — to support and empower fathers by offering opportunities for connection, education and community engagement — and christened the group Dad Guild. 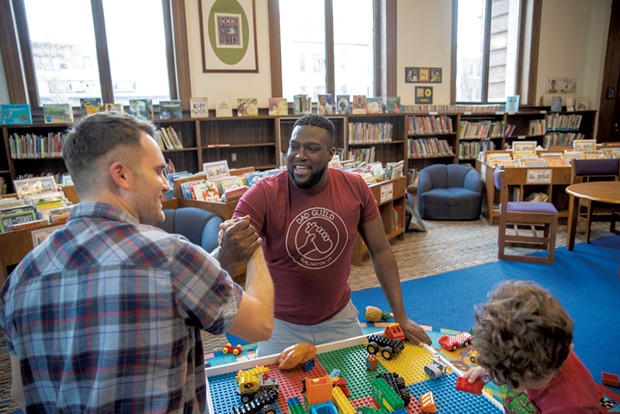 In the nine months since, membership has grown from 30 to more than 130, and Dad Guild has become a 501(c)(3) nonprofit organization.

Monthly events include nighttime meetups for dads, like the one at the Pinball Co-op; a monthly Saturday afternoon playgroup at the Fletcher Free Library in Burlington; and a monthly Sunday morning Kids & Coffee playground outing. Both the library and playground events are open to the whole family. The Dad Guild website also includes a list of Chittenden County playgroups, story times and sing-alongs. T-shirts with the organization's logo — a hand triumphantly clutching a baby bottle — have recently been distributed to members.

Albaugh — who now has a second daughter, 6-month-old Penelope — has loftier aspirations still. He's troubled by the societal and cultural scripts that portray men, and particularly fathers, as emotionally vacant, disengaged and incompetent (Homer Simpson, anyone?). And he believes that men should be better represented in discussions, activism, and professional work related to issues like early childhood education, and preventing child abuse and domestic violence.

"What message are we sending to the community when only women are doing this work?" he asks. To that end, he's begun a dialogue with organizations including Turning Point Center of Chittenden County, Champlain Valley Head Start, Lund, Prevent Child Abuse Vermont, and Steps to End Domestic Violence to see how Dad Guild might help with programming and education for fathers.

He's also spoken with Josh Miller, director of the Family Room, about collaborating to create another on-site playgroup for dads, and to participate in their fledgling Dads Mentoring Dads program. "I was super excited to hear his ideas," Miller said of Albaugh. "He's emotionally tuned in and not afraid to express that."

Albaugh is also advocating for seemingly simple, but meaningful, steps, like putting diaper-changing tables in men's bathrooms at local businesses. When he noticed recently that Michaels in South Burlington didn't have one, he spoke to a staff member, then wrote a letter to the store manager, and the store installed one.

Ultimately, he'd like Dad Guild to be known in the community as a resource and support for anyone taking on a fatherhood role. And he'd like to expand its reach to fathers of older kids as well, with the hope that those dads could offer advice and perspective to new fathers.

Fisher, Dad Guild treasurer and father of two, promotes the group to moms and dads he meets. The former Army intelligence analyst was a stay-at-home dad for 18 months and said he was often the lone man at playgroups, the pool and the library. He met Albaugh at a sing-along for kids at Radio Bean. Dad Guild, Fisher said, addresses new fathers' need to have an authentic connection with and learn from other dads, and to be able to express vulnerability. Growing up with a single mom, Fisher never thought he'd be a dad. Now he's giving tips to other dads on developing an efficient system for getting out of the house with kids. And he learned from a fellow Dad Guild member to put blackout shades in his younger son's room to improve the child's sleep.

Board member Nicholas Kramer joined Modern Pop when his son was 3 weeks old. His wife, a yoga teacher trainer at Evolution, suggested he might like the group. Kramer said he was hesitant at first, as he wasn't sure what he'd have in common with the fellow participants. But he was pleasantly surprised.

"I thought it was important to have a group of people going through the same thing at the same time," Kramer said. He appreciated that he had a designated time every month when he could talk about being a dad. And he found it "validating" to hear that others in the group were dealing with loss of sleep and free time like he was.

Ethan Alden-Danforth of Shelburne started participating in Dad Guild events this winter. He and his wife moved to Vermont from New York City two and a half years ago and their son, Wyatt, is 8 months old. Dad Guild has given him a venue to get answers to questions about child development from people he can relate to. The group can help dads envision a role of fathers different from what they might have experienced growing up, he said. The message: "It's not just acceptable, but welcome and beneficial, to have [an] emotional relationship with your child."

In creating a space where dads can socialize, joke and learn from each other, Albaugh hopes that messages like these will slowly be internalized. Perhaps, for example, a dad who's uncomfortable wearing a BabyBjörn or being silly with his kids will see another man doing these things at a Dad Guild event and realize it's no big deal. Or a socially isolated dad will come to a playgroup at the library and realize it's a fun way to spend time with his child. Maybe passersby will see a group of men wearing Dad Guild T-shirts cleaning up trash from a playground or participating in a march that supports women — things Albaugh hopes to do in the future — and start to create a different picture in their minds of what it means to be a dad.

"Overall, dads I meet want to be good dads and want to be connected," Albaugh said. That starts with acknowledging both the critical role fathers play in a child's life and the different ways in which fatherhood is transformative. And it requires modeling what it means to be an engaged, caring father.

"We're trying to reverse some societal trends," said Albaugh, but "it's going to take some time."