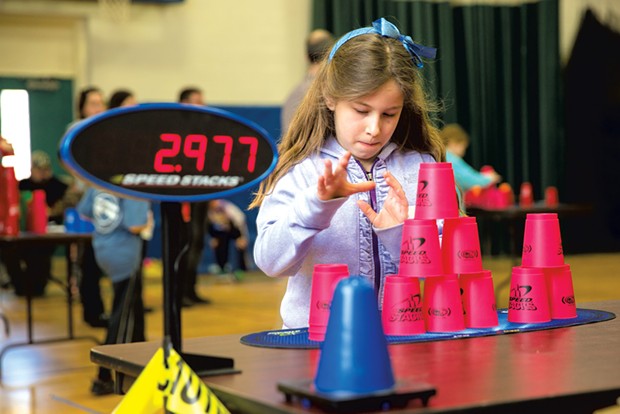 It was lunchtime at the first Vermont Family StackFest competition at Camels Hump Middle School in Richmond. A crowd of kids and adults were gathered in the cafeteria, munching on hot dogs and baked goods and getting their faces painted.

But 9-year-old Finian Towle was standing at a rectangular table in the gym, focused on a singular task: stacking cups as fast as he can. He was practicing a sport known as speed stacking.

Finian started by slapping a StackMat timer — a long strip of rubber with a built-in stopwatch — before quickly assembling and disassembling 12 plastic cups in a specific sequence of pyramids known as "the Cycle." When he was finished, he stopped the timer by slapping the mat again and proudly stood back.

That afternoon, Finian won this category for his age group with a time of 14.179 seconds, and took third place overall.

"I basically practice two hours a day," Finian explained. "When I get home from school, I get my cups out and stack." At this point, he said, "I can basically do it with my eyes closed." Will Towle, Finian's dad, said he loves hearing the click, click, click of cups at home, knowing that his son is getting a little better each time.

Speed stacking originated at a Boys & Girls Club in California in the 1980s, and now has its own governing body, the World Sport Stacking Association, which hosts national and international tournaments. This event was a local affair organized by Richmond Elementary School physical education teacher Brian Godfrey. He added sport stacking to his curriculum when a student with a health condition required a less physically taxing activity. 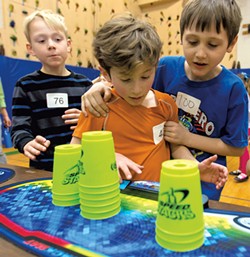 While stacking and unstacking cups as fast as possible might not seem like a sport, it helps strengthen hand-eye coordination, ambidexterity and muscle memory, Godfrey explained. The movement of reaching across the body to construct the cup sequences is especially helpful to kids with certain disabilities, who need practice crossing their midline — an imaginary line down the center of their body.

Fourteen adults and 101 kids registered for the StackFest, and it was a lively scene: Godfrey was in constant motion directing students, parents and volunteers. Spectators sat in the bleachers and gathered around 11 long tables, watching competitors race to stack cups in three different sequences. Officials recorded results, which were then ferried to the front of the gym by timesheet runners, entered into a database and projected onto the wall.

Godfrey was able to get equipment donated from Speed Stacks, a cup-stacking equipment manufacturer. Staffers from the WSSA also helped run the event.

Finian's mom, Allegra Carpenter, said she likes sport stacking for its simplicity: It doesn't require supervision, there are no practices to drive to and it's relatively inexpensive. Forty bucks will buy a set of cups and a stack mat.

Another mom, Genevieve Burnell Habeck, attended StackFest with her first grader, Caleb. She volunteered as a timesheet runner and was almost as excited about the competition as her son, whose face was painted like a green zombie.

"It's really great that it teaches sportsmanship without being super athletic and hardcore," Habeck said.

What did Caleb say he liked about it? "Getting timed, and beating myself."