Special Delivery: A Grandfather Reflects on Volunteering for Meals on Wheels With His Grandchildren 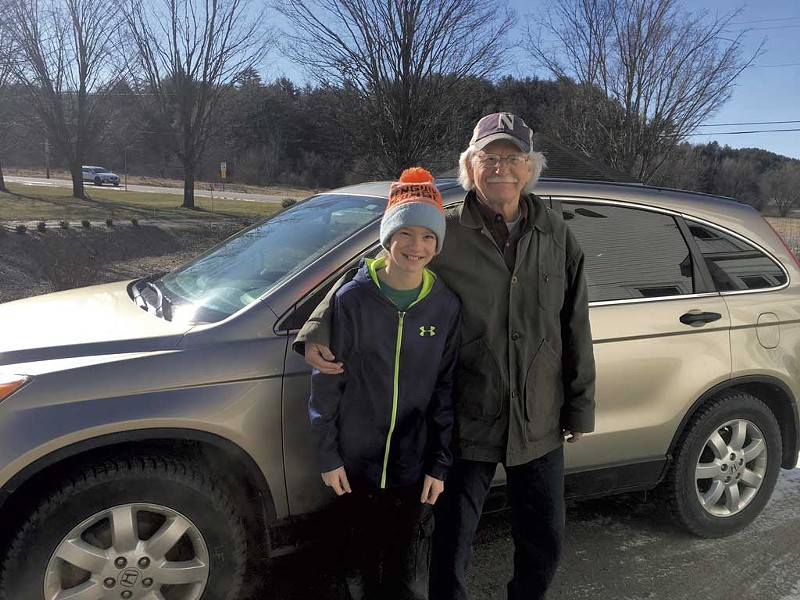 Essex resident Tom Thompson, 74, began delivering meals for Burlington Meals on Wheels in 2006, as part of a community service commitment at his job at RE/MAX North Professionals. During a family dinner eight years ago, his granddaughter Charlotte, then 7 years old, said she'd like to help people who need food. Thompson suggested that she and her two sisters take turns helping him with Meals on Wheels, a primarily federally- and state-funded program that provides food to Vermont's homebound, disabled and elderly populations who are at "nutritional risk." Their brother, Owen, then 4, started volunteering when he turned 7.

Since that dinner conversation, Thompson's four grandchildren — Charlotte, Amelia, Rebecca and Owen — have taken turns accompanying him on his 1.5-hour route delivering 25 meals to residents of Burlington's New North End on the first and fifth Thursday of each month. The grandchild whose turn it is stays at Thompson's house the night before and, in the morning, they go to downtown Burlington to pick up the meals. When they're finished, Thompson takes his young helper out for lunch before bringing him or her back to school by 1 p.m.

On the mutual benefits of the program:

I was delighted that these country girls who live on a few acres in Jericho were so eager to get out and meet new people in locations and circumstances very different than their own, and I also thought it would provide an additional stimulation to the people we were delivering meals to. I figured those receiving meals probably didn't get to see smiling children at their front door very often. For most of them, I think that proved to be quite true.

On talking with clients:

Interactions with the recipients were usually quite brief, with a conversation that usually consisted of, "Meals on Wheels here!" while handing them the lunch bag and dinner tray, followed by their "thank you" and the kids responding, "Have a nice day." As months and years went by, and the recipients became more familiar with the kids, there was the common question, "You don't have school today?" The kids would respond, telling them they got out of school to deliver meals. That always brought a smile.

One time I delivered meals alone since Rebecca, who was scheduled to be with me, stayed home because one of her sheep was having a lamb. One customer, a very smiley grandmother using a walker, asked where my granddaughter was. I explained about the lamb. That made her quite happy, and the next time she saw Rebecca, she asked about her lambs. That showed me that the kids' deliveries were making an impression.

On asking and answering questions:

As the kids first began delivering, they had lots of questions. How much do the meals cost? Who pays for them? Do people get meals every day? What do they do on weekends when there are no deliveries? Why don't we deliver to that person anymore? Why do those people smoke? That led to a long discussion about my abhorrence of smoking and how my dad had died of emphysema. Then a discussion of addictions and the struggles to control addiction followed. Another frequent question was, "Why can't they make their own meal?" This was often after we had delivered to a seemingly capable person with no apparent handicap. Because I didn't know the answer, we would often speculate and consider different possibilities. Maybe they can't drive to go shopping for food. Maybe they don't know how to cook. Perhaps they just want to see someone during the day. Maybe they have a handicap that isn't obvious.

On extending the learning opportunity:

Because the meals had to be handed to a person and not left at a door, we sometimes had leftover meals. Since we usually passed homeless people while driving, it was decided that we would give those undelivered meals to them. That led us to searching for their favorite locations. We found that the south-facing brick wall on Bank Street was a fairly reliable place to deliver our last meals. Many more discussions followed, especially when one man refused the food. The other food-related activity they participated in on our way into Burlington was delivering our extra eggs from our chickens to the Chittenden Emergency Food Shelf. We regularly dropped off five to eight dozen that were greatly appreciated. This provided an opportunity for the kids to see another place to help and how many people needed food.

On what was gained from the experience:

The time spent with my grandchildren was truly precious. I had hoped that their experience would expand their growing worldview. Delivering meals to people who were Albanian and African immigrants, one-legged and in a wheelchair, nearly blind and using a walker, and at various stages of elderly degeneration, let them see there was a vast variety of life outside of their own somewhat-protected nest. I had hoped it would help develop their sense of giving, empathy and caring, and I think it did.