Shelburne resident Rob Broder runs Ripple Grove Press, where he publishes children's picture books. The father of a 9-year-old daughter is also the author of three children's books. His latest, Crow & Snow, was published by Simon & Schuster Books for Young Readers in October.

The picture book is a heartwarming story of two unexpected friends — a snowman and a crow. The book makes an apt bedtime tale, mesmerizing young listeners with illustrations by Olivier Tallec, but also gently reminding us that friendships endure through changing seasons. It's a particularly fitting reminder in these challenging days of the pandemic.

Just before Thanks-giving, Kids VT checked in with the author from his home office.

Kids VT: What are the most and least fun things about being a writer?

Rob Broder: The most fun is being able to write down what's swirling in my head. The least fun is when I'm stuck on how to get one scene [to] flow smoothly to the next. I know what I'm thinking, but sometimes it's hard to write it and make sense.

RB: I'm a huge fan of The Snowy Day by Ezra Jack Keats, which was read to me in elementary school (see below for more on this book). Every year, I think of the snowball Peter brought home in his pocket.

KVT: Have you always wanted to be a children's book author?

RB: I have always written down things as far back as I can remember. Either writing in a journal or jotting down story ideas or even doodling. When I became a preschool teacher, the experience introduced me to picture books as an adult. During circle time, I would read a book or two, which then led to making up stories. Sometimes my stories held [my students'] attention span longer, and the kids weren't so wiggly. Sometimes I'd have them help with the story. Much later, I was going through an old journal, and inside was a scrap of paper from those days that said, "A scarecrow becomes friends with a snowman, but needs to say goodbye every spring." I grabbed a pen and wrote a draft of Crow & Snow. 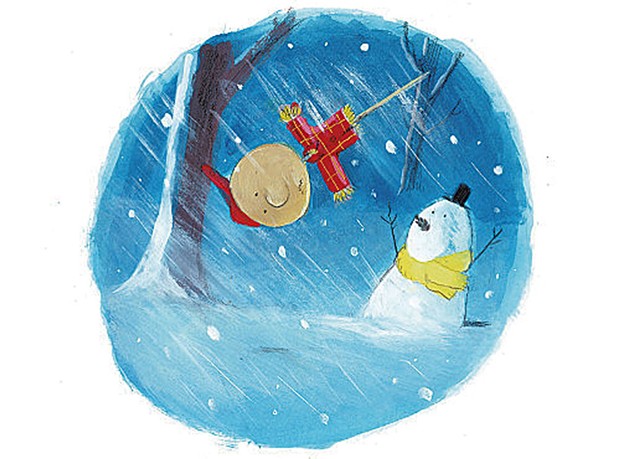 Ezra Jack Keats, the famous author and illustrator of The Snowy Day, was born in 1916 in New York City to Jewish immigrants from Poland. Keats grew up poor and experienced anti-Semitism throughout his whole life.

After serving in World War II — where the army put his artistic skills to use designing uniform camouflage — Keats became a children's book illustrator.

The first book he both wrote and illustrated was The Snowy Day, published in 1962. Keats had noticed that the books he was commissioned to illustrate always featured white children. That didn't seem fair to him.

The book won the prestigious Caldecott Medal in 1963, making it the first Caldecott winner to feature an African American child. Although Keats was sometimes criticized because he was a white author writing about Black characters, he went on to create a number of books. Peter, the protagonist of The Snowy Day, also stars in Whistle for Willie, Peter's Chair, A Letter to Amy, Goggles!, Hi, Cat! and Pet Show!

Today, readers of all ages are still enchanted by this little boy in a red snowsuit with a pointy hood. The book reminds us of the beauty of a winter day and the sweetness of childhood.