by Megan James and Alison Novak

If you have young kids, or you know people who do, you've probably taken or seen countless pictures documenting the first day of school. They're everywhere on social media at the end of August and beginning of September.

Missing from most parents' Facebook feeds, however, are photos of the educators who await these eager young learners. Kids VT spent the last precious weeks of summer meeting six of them, and peeking inside their classrooms.

We chose teachers in different parts of the state who are working in a variety of learning environments, from a one-room schoolhouse at the end of a steep gravel road in Fairfax to a magnet school in the heart of Burlington's urban Old North End. We asked them to tell us about their unique experiences and approaches to educating Vermont kids.

These days, the public conversation about education is dominated by talk of testing, standards and the Common Core. These snapshots remind us that there are people behind the policies. And some of them are just as anxious about the first day of school as their students are. K

First-grade teacher Sue Kolk has welcomed students to Grand Isle Elementary School for the past 27 years. Kolk grew up in northern New Jersey and came to Vermont to study education at the University of Vermont. She lives in Williston with her husband, dog and cat and has two children in college. She's an avid runner and volunteers weekly at the Humane Society.

Why teaching 6- and 7-year-olds is fun: I like first graders because they're a little more independent than kindergarteners. They're excited and eager. They're affectionate. They're open to trying new things.

The first week of school: I spend a lot of time getting to know them, going over classroom procedures and school and classroom rules, even practicing things like how to put a cap back on a marker, building independence so they can do things on their own. I really think kids thrive on routine.

On teaching kids how to be good citizens: Last year, we collected our trash produced during snack time for one week. We sorted the trash and then they came up with ideas to reduce for the next week. We did reduce, and many parents said their children wanted to use resuable containers. Quite a few asked if they could start composting food waste at home.

What she aspires to teach her students: I feel like a really important part of my job is modeling. If I want people to speak kindly to me, I need to speak kindly to them. At the end of the year, I hope I've taught kids to enjoy learning, that it can be fun and that we need to treat other people and creatures kindly. It's not all here for us to pillage.

Scott Beckwith was an operations supervisor for a national trucking company before he decided to become an educator. Now he's the teacher leader in the social studies department at Mt. Abraham Union High School in Bristol, where he's worked for the last seven years. He lives in Burlington's New North End with his husband, Chris, and two dogs.

What prompted him to switch careers: I had a corporate job, but I was so miserable and wasn't feeling inspired by what I was doing. It wasn't challenging anymore, and it made me realize that it was not what I wanted to be doing. I don't make as much money as I used to, but I'm so happy.

How he transitions from summer to school: I really love my time to be able to think about where I'm going with my classes and develop new ideas, but when the school year starts, that's when the rubber hits the road. I'm excited, and I am nervous. I've been waking up in the middle of the night lately saying, "Oh, I gotta write this down."

Something inspiring he's working on this year: I'm teaching an honors-level class called American Studies. It's literature- and reading- and writing-intensive. My (recently retired) colleague Rick Desorda and his students have gone around and interviewed veterans in the Addison County area. I'm hoping to connect with the Vermont Folklife Center and digitize the transcripts, have the veterans or someone in their families read them aloud, kind of like StoryCorps.

On his tendency to shed tears when a student does something great: They're tears of joy. I just love to see people happy, and [see them] surprise the world with their talents. 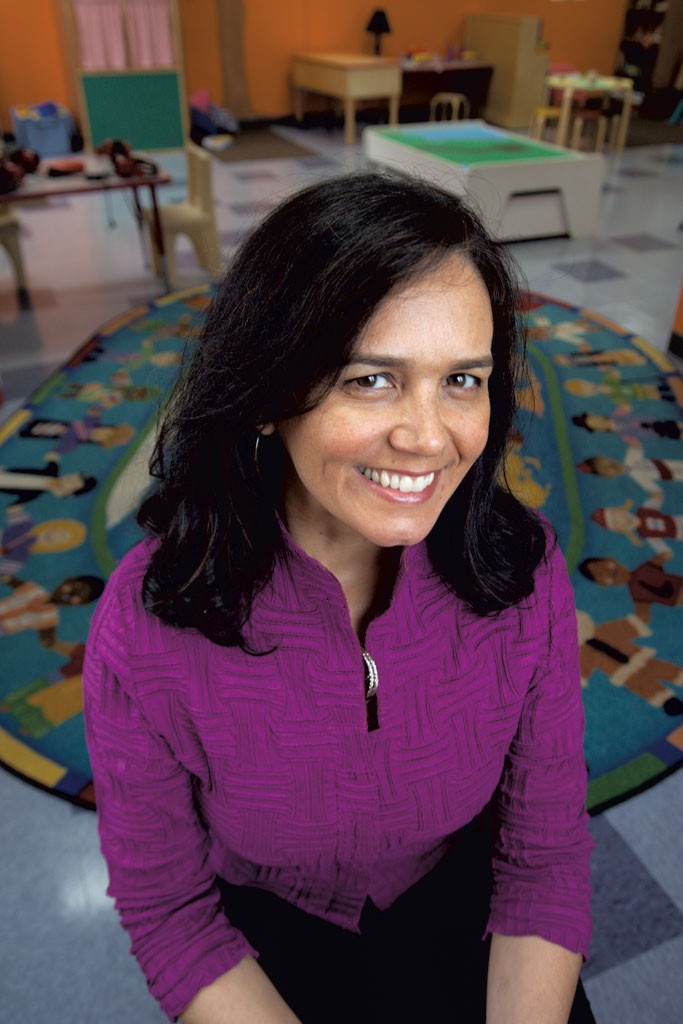 Silvia Wakim taught music in her native Brazil before moving to the U.S. in 1999. She's been teaching pre-K at the EDGE in Essex for 11 years. The mother of three — Catherine, 27, Giana, 25, and Eric, 14 — brings a worldliness to her curriculum, which features music, art and geography. She loves to sit with her students on a huge world-map rug while teaching them words in different languages. She lives in Essex Junction with her husband, Renato, son, Eric, and two cats, Friday and Frisbee.

On preparing for the new school year: The classroom needs to be beautiful. The kids really look forward to being in this classroom because it's fun and comfortable and very organized. I work in a clean environment; it cannot be dirty or messy.

What happens on the world-map rug: We learn a few words in six to 10 languages. The kids can point to where Australia is, where France is. We do imaginary trips to different places. We discuss what's the best way to get to that country, how many days will it take. They might say, "Huh, there's a big ocean in between. Let's go by boat." "Oh, but the ocean can be wild." Then another says, "Well, the pilgrims came across in eight days." One thing links to the other and finally [someone says,] "Let's just go in an airplane."

Why she focuses on geography: I like the kids to get out of [pre-K] knowing countries and languages, knowing there's something other than the U.S. They understand diversity [and that] everybody's different, but inside we're all the same. I think it's a great concept to grow up with.

On the joy of teaching: One girl — she's 13 — came to visit and say hello. She left my class when she was 5 and she remembered me. That made me really happy.

Brooke King teaches a second and third grade multi-age class at the Sustainability Academy at Lawrence Barnes School in Burlington; she's also studying for her administrator's license at Saint Michael's College. During her 10-year teaching career, King has worked at an alternative school in Maine and as a middle school teacher for English language learners. She's mom to Autumn, a fourth grader at the Sustainability Academy, as well as 3-year-old twin boys, Kieran and Joseph.

How she starts off the year: A successful first week of school for me is connecting with every student in a way so they feel excited to be there, in a way that makes them feel like, "This is my classroom." I never call it Mrs. King's classroom.

On allowing children to have a voice in the classroom: Last year they studied the solar system, and each student got to pick a question related to the topic and research it independently. I just let them do what they were genuinely interested in. During independent work time, I don't care if they learn on the floor or stand up at their desk, as long as they're engaged. There's no set snack time in this classroom. Kids are able to eat when they're hungry.

What it's like to live and teach in the same neighborhood: There's a lot about it that I really love: The fact that I can walk from my house to the community dinner; I love that my kids are a part of this community, that we can come [to the school] in the summer and check on the gardens.

Back-to-school jitters: I always have these dreams. It's recurring. I didn't plan anything and I didn't set up my classroom. Would that ever really happen?

For the past three years, Luke Foley has taught the STAR program (Students Taking Alternative Routes) at Northfield Middle and High School. The program, which was created 15 years ago for kids who were "falling through the cracks," now includes about a dozen students. Last fall, the state recognized Foley's work by honoring him as the 2014 Vermont Teacher of the Year. Before moving to Vermont in 2007 to teach, Foley led wilderness-therapy programs in Utah. He lives in Warren with his wife, Rachel, their 2-year-old daughter, Nora, 7-month-old son, Tobin, and a black lab named Dozer.

On his first day teaching high school social studies: I had planned a really cool activity and I remember getting jazzed about it. But one of [the kids] just raised a hand and said, "Uh, this is the stupid class; the smart class is over there." And that really stuck with me. Any time a group of kids has that mentality, they're doomed to failure. It's also a way for them to cop out. It's always been a mission of mine to level the playing field.

On the STAR program: It's focused on project-based service learning out in the community — working with school gardens, universities and senior centers. We work with a population of kids who are typically disconnected from the school. Oftentimes they feel pretty disenchanted. We give them an opportunity to give back.

What an alternative approach to teaching food history looks like: We do hikes where kids collect all the food that they're going to eat. They're picking up dandelions and eating wild sorrel. Part of that is about building perspective. Toward the end of the year we start looking at industrial food systems. When you're trying to understand why people would cram thousands of chickens in a tiny cage, it's pretty important to understand what it's like to walk 5 miles to get 500 calories.

On camping with STAR: It's amazing what kids will talk about in front of a campfire. We have kids write their life stories to really foster that sense of community.

The brand-new, one-room Imagine School House in Fairfax will have just one teacher when it opens this fall: Jessica Tomkowicz. She'll work with fewer than a dozen students — in first through fifth grade — to create personalized learning plans that will guide the curriculum. A native Vermonter, Tomkowicz got her teaching certificate from the University of Vermont in 2010, then moved to Florida to run a one-room schoolhouse there called Rising Stars Academy. She returned to her home state last year to raise her now 1-year-old son, Maxton. They live in Colchester with her husband, Matthew, and cat, Lo.

Her most memorable first day: My first day at Rising Stars, I had no idea what I was walking into. I had this whole lesson planned out so perfectly, and there were three new students coming in, brothers who had been homeschooled. They came into the classroom and completely turned everything upside down. We ended up spending half of our day at the playground because they had so much energy.

How she tackled the challenge: [Those boys] loved tinkering with car engines. They were very smart, but sitting down to read a book was insurmountable. So [we created] personalized learning plans where they could go outside and sit on the swings with a clipboard, just so they were moving. We would talk about nuts and bolts and screws; those would be their manipulatives for math. The 6-year-old would add washers to bolts. That's how he learned multiplication.

On landing this new gig after a year and a half working in an orthodontic office: I'm so excited to be back in the classroom! What a perfect opportunity. This is everything that I wanted. It's a dream job.