Sitting Down With the Flynn's Artistic Director, Steve MacQueen 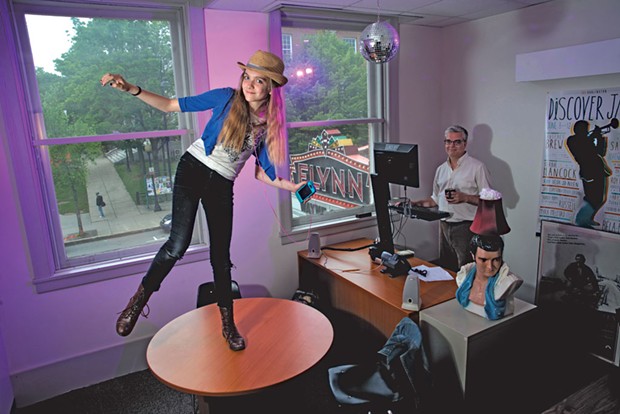 A self-described Air Force brat, Steve MacQueen, 51, grew up all over the country. In 1983, he enrolled at Florida State University in Tallahassee, where he met his now-wife, Kim. It took him

That wasn't the only time MacQueen took the long way 'round. When Kim told him they should either start a family or move to New York City, he picked the latter, landing a job as press officer at the Parks Department. By the time they left the city in 1998, Kim was pregnant with their first child, Claire.

That same year, MacQueen started a marketing job for the 400-seat, "acoustically perfect" Spivey Hall in Atlanta. Then MacQueen's boss asked him to build the venue's jazz series. His first booking: Sonny Rollins, for a shockingly low $12,000.

After a stint in Asheville, N.C., and a few more years in Tallahassee, MacQueen landed the Flynn position. His family moved to Burlington in 2012.

Kids VT recently sat down with MacQueen to talk about how he juggles family time with programming the state's most prominent theater, and what his daughters have taught him about life and work.

On the early years of parenting:

We moved to Atlanta in 1998 when Kim was pregnant. I had a week to buy a car, rent a house and find a job. And I did all three. And all three were terrible. I got the worst Camry ever. I got this house by the train tracks. And I got this job working for an insurance cult, writing propaganda.

I started the marketing job at Spivey Hall in Atlanta when Claire was exactly 1 month old. So I was delirious. It was amazing to me that they thought I was coherent at all.

Claire goes to Burlington High School. Rose goes to Edmunds Middle School. The challenge is getting Claire into the car so Rose won't be late. My wife does the driving duty because she's a morning person. She's already been up for two hours. I'm not a morning type. It's fairly frenzied; we always get up too late.

What his kids have learned from his performing-arts career:

I force them to come to some performances. I've learned they don't like modern dance. But they love the Broadway stuff. Their revenge on their new-wave, cutting-edge dad is to go right to the heart of the most mainstream thing. Claire's favorite movie of all time is Cabaret.

Rose, she's more my old-movie buddy. I was so proud of her last week. We had just watched Sullivan's Travels. Great '40s comedy. It has Veronica Lake in it. So, we're walking down Church Street a few days later, past the mural by the parking garage. And Rose walks up to it and goes, "Isn't that Veronica Lake?" It was. And I think, God, I love this kid!

On working nights and weekends:

There are certainly times when I feel like I'm away from my kids too long, too frequently. But I'm so fortunate to have my partner, Kim, who's incredible.

I have a busy job. I'd love to find ways to scale it back. But we have a small staff and a ton of shows. And I am wholly dedicated to doing the best job that I can. Sometimes that does get in the way of family time. And sometimes it bothers me.

But I built the schedule for the place, so I've got nobody to be mad at but myself.

How his view of parenting has changed:

As a young adult, I thought that parenting was this chore and responsibility and slog — and I guess there are moments like that. But that's not how I feel about it at all. I love sitting at the dinner table with my kids, just walking down Church Street with them. They're delightful young people. I can't wait to see how they turn out.

On what he admires in his kids:

Even as a young child, Claire was always giving. She tries to understand people's motivation. She has always had an ability to see outside of herself, well beyond her years.

Rose takes such joy from projects. And the thrill of discovery that she can have is like nothing I've ever seen.

I hate complaining about my job, because it's a really cool job. But sometimes, in any job, you get in a rut. But when I see Rose's face light up when she presents some art she's done — she's a very good artist — I realize that I can do that at work, too. Like, Look at this show, it's incredible! This amazing artist came to our town, and I brought them here. What a thrill.

My daughters have helped me a lot. They've made me a better person. I think that's what kids do.

Balancing Act is a new column in which we ask a Vermont parent about the intersection of work and family life. Know someone we should interview? Email us at ideas@kidsvt.com.