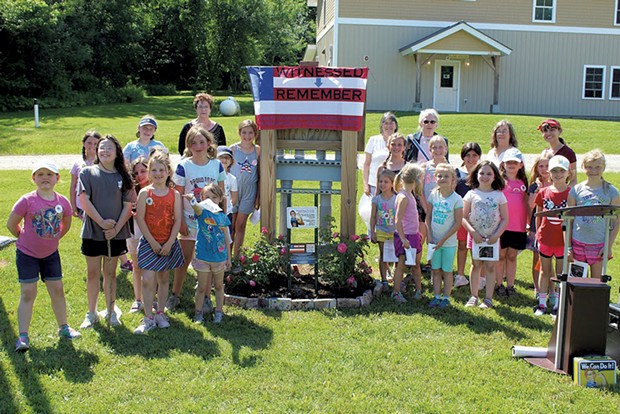 In July, Vermont became the 25th state to have a Rosie the Riveter Memorial Rose Garden. The Girl Scouts of the Green and White Mountains helped to install the garden — commemorating the contributions of women who joined the workforce during World War II — at Camp Farnsworth in Thetford Center. It contains two rose bushes bordered by pavers. Madeleine LeBeau, a Gold Award Girl Scout from Virginia, has joined a national campaign to install the gardens as part of her iWitnessed-iRemember (iWiRe) Gold Award project. The Gold Award is the highest achievement in Girl Scouting and requires a Girl Scout to initiate meaningful, sustainable change locally, nationally or globally through a project. Madeleine, who will be a high school senior this fall, offers teens opportunities to learn about World War II directly from veterans, civilians and concentration camp survivors, then apply their lessons to service projects. She and her parents visited Camp Farnsworth in July and taught day campers there about the working women of World War II, who came to be represented by media icon Rosie the Riveter. The campers made three tied fleece blankets to donate to veterans and decorated pavers to encircle the garden. They also got to chat via speakerphone with a real-life Rosie, Bertha Glavin, 93, of Quincy, Mass., who told them about making raincoats for Navy sailors. Speaking at the dedication, Edna Curtin, regent for the Vermont State Society Daughters of the American Revolution, pointed out a T-shirt one girl was wearing, saying it summed up what women can do: Dream, Believe, Achieve, Repeat.