Riding it Out: How Horse-Assisted Therapy is Helping Kids In and Out of the Barn

Riding instructor Sarah Seidman stands in the middle of the arena at Pease Farm Stable in Middlesex. Her two students — 13-year old Celina Torres on a medium-size, white mare named Molly and Celina's grandmother, Elaine Boyce, on the elegant, brown-and-black Windsong — rein in their mounts to listen to her directions. They're about to play a game.

"Okay, see that?" the wiry Seidman says to Celina. She motions to the other side of the arena, past three poles dividing the dirt floor into two zones. "That's North Korea, where you live," she says. She explains that Celina should try to steer her horse back over the poles to her grandmother's side, aka "South Korea."

"I'm the evil dictator here in North Korea," Seidman continues, "where you have very few freedoms and can't do anything unless I say so."

"So don't smile until I tell you to do so," the instructor deadpans.

The Waterbury Center teen, clad in an animal-print top, brushes dark brown hair out of her face, revealing a grin as she nudges Molly to her end of the arena.

Seidman tells Boyce to try to rescue her granddaughter by walking Windsong into North Korea while Seidman isn't looking. Seidman hams it up as the dictator, commanding the riders around the arena in their separate "countries." She thwarts several of Boyce's attempts to free her granddaughter.

Finally, when Siedman's back is turned, Celina makes a break for freedom, steering Molly toward the border. The horse obediently follows her direction.

"Aaaah! She's getting away!" Seidman mock-wails. The teen's focused face turns into an expression of proud triumph as Molly walks across the center line.

Atop Molly, Celina navigates the arena with ease. Once she dismounts, though, getting around is more of a challenge.

Celina was born with spina bifida: Her backbone and spinal cord weren't fully developed. The severity of the condition varies from case to case. For Celina, lower spinal nerve damage makes basic motions below her waist difficult. She usually wears leg braces to help her balance as she walks. But because most of her muscle loss is below her knees, Celina is able to ride brace-free.

According to her mom, Mary Sanders, Celina always has someone available to help her — except when she's with Molly. In the arena, she takes the lead.

"That has been huge for Celina," Sanders says. And it's not the only way riding has benefitted her daughter in the two years since Celina started taking lessons. Riding isn't just fun for her — it's also therapeutic.

Seidman, her instructor, was certified by the Professional Association of Therapeutic Horsemanship International in 2006. In 2008, she founded the nonprofit Vermont Horse-Assisted Therapy, which operates out of her farm, to help make riding more accessible to people with disabilities.

Horses are particularly well-suited to therapeutic work, Seidman says, because they're large animals — their size forces students to manage safety issues and take risks. And horses communicate differently than people do.

Amber Bennett, director of Hope Grows Community Farm Therapeutic Riding Program in Hyde Park, another horse therapy program, says riders learn powerful lessons when they have to interact with another species. "A horse doesn't respond verbally like a human being does," she says. "You can make mistakes with a horse, and the horse doesn't hold it against you like a human might. So it's a different kind of relationship." 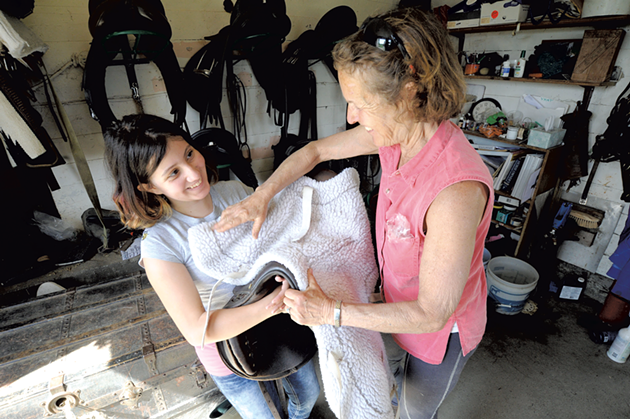 Horse-assisted therapy first attracted widespread attention after the 1952 Olympics. That year, the silver medalist in the equestrian sport of dressage was a Danish woman, Lis Hartel, who used a wheelchair. Riding had helped her recover from polio, she said.

During the 1960s, horse-assisted therapy became popular in Europe, then later in the U.S., as a complement to traditional therapies. In the 1980s and early '90s, therapists developed a standardized hippotherapy curriculum — "hippos" is the Greek word for horse.

Hippotherapy is provided by a licensed therapist, in conjunction with a trained instructor, and the horse's movements assist the client in meeting clinical goals. Seidman's program, on the other hand, emphasizes learning riding skills as a way of improving physical and mental health.

"We offer riding instruction regardless of disability, adapting to what a student needs in order to learn how to ride," Seidman explains. "If a student is blind, we offer more verbal instruction. If they are deaf, you'd see me using signs. If they are an amputee, we'd adjust their leg position. If they have ADHD [Attention Deficit Hyperactivity Disorder], we'd have a strong emphasis on movement in the ring and moving quickly so as to keep their attention."

All of Seidman's horses go through a vetting process. At least two of VHAT's instructors ride and assess the temperament of any horse new to the program.Then there's a one-month trial period, during which instructors test the horse's ability to tolerate unbalanced riders, unexpected movement or loud noises, and boredom, since lessons sometimes involve repetitive activity. Once accepted, each animal is limited to two lessons a day with a rest interval of at least two hours in between.

To determine how to best help her students, Seidman reviews their applications, then meets with them to see how they respond to a horse. She observes their physicality, how they react to the horse's touch, how they communicate with the animal, whether they can follow more than one step at a time and how they respond to instruction. She then designs lessons based on her observations.

After the North Korea/South Korea activity, Seidman explains that what might have seemed like just a silly game was actually a powerful teaching tool. Celina and her grandmother were practicing riding skills like walking, halting, steering and leaning forward with their weight off the saddle.

The tasks also required Celina to work on building core stability and strength as she directed Molly around the arena.

Riding helps Celina learn to "trust her body," says her mother. "For example, one foot is weaker than the other and for a while it kept slipping out of the stirrup. Celina had to learn how to get that foot back in, how to deal with things as they come up."

There are cognitive benefits, too, says Seidman. Celina has to quiet her mind, focus, listen to directions and follow through on a goal. Seidman sometimes sets up obstacle courses to work on Celina's short-term memory, which is weakened because of her spina bifida. She'll explain a sequence of steps to Celina just one time but offer the teen unlimited chances to follow them, eliminating the fear of failure.

As a licensed mental health counselor, Bennett, of Hope Grows, diagnoses patients with conditions like anxiety, depression, post-traumatic stress disorder and ADHD. She works with parents, teachers, doctors and other service providers to develop treatment plans that include equine-assisted therapy, which doesn't involve riding instruction. "Most of it is taking natural situations with horses and connecting them to individual lives," she says, to "help them to problem-solve, work on communication skills and hopefully, in turn, take that back to their lives."

"Take grooming," she offers. "Grooming a horse helps individuals get a sense of relationships." It offers a wide range of benefits: A person who has difficulty forming bonds must build the trust of a horse before they can touch it; grooming helps model self-care behaviors for clients who struggle with caring for their own bodies; clients with sensory issues can address them through touching the horse and using different types of brushes. Successful grooming can also lead to a sense of accomplishment and a feeling of pride.

For kids with ADHD who struggle to stay focused, Bennett devises activities that require them to maintain their attention for an extended period of time. She might set up stations where a client walks a horse around the arena and stops at cones to perform different tasks, like pausing for 10 seconds or walking the horse over a bridge. The client might start by completing the task at just one cone and build up to all of them.

Horses can help children with autism build spatial awareness. Since many kids on the autism spectrum don't want to be held or touched, an exercise where they hug a horse helps them get comfortable with physical closeness. Another exercise, in which a client must maintain eye contact with a horse, can help ease social anxiety. Since horses can't respond verbally, they're often less threatening. This helps kids focus on the message they are sending and not the response. Often, "it seems like there is a more natural bond with an animal for someone with autism," says Bennett.

Horses can also aid with emotional trauma. When 11-year-old Morgan Foster's father was diagnosed with a brain tumor in 2014, she resisted traditional psychotherapy. A family friend, knowing Morgan's passion for horses, suggested the program at Hope Grows. For two and a half years, she's been working with Bennett, riding and doing chores. She bundles up on the coldest of winter days to clean out stalls and volunteers at the barn during summer vacation.

The settling effect of time spent at the stable was immediate for Morgan, says her mother, Samantha Foster. "The difference was huge. In confidence, in disposition," she says. Foster works at an organization that helps survivors of domestic and sexual violence, and, after watching Morgan's transformation, began referring clients to the program.

Some weeks, Morgan spends time in the barn, grooming horses and talking with Bennett. Other weeks, Bennett and Morgan spend more time riding in the arena. Always, they're focused on processing Morgan's situation. By practicing communication skills with horses, Morgan is better equipped to explain her feelings in the outside world, says Bennett. A simple task like gently directing a horse to move prepares Morgan to ask for help outside the barn.

"When Morgan gets home, she is relaxed," says her mom. "She is excited about what she's learning."

Celina's mom sees her daughter experiencing similar benefits from her time with Molly. Says Sanders: "Celina doesn't always assert herself, and Molly can be tricky when putting on her saddle. Celina has to handle that."

And, she says, "Celina learns to be a pack leader, making choices for herself and the horse."

Celina has started to stick up for herself more, speaking up about how she's feeling both at school and at home, Sanders says. She's able to do things more independently, too, like following a verbal list of directions, taking her medications and getting ready for school.

Though Celina still jokes about the possibility of getting bitten when she tacks Molly up, it's clear the teen is comfortable with her horse.

"I trust Molly no matter what," she says. "When I'm on her, she does what I want her to do. She isn't going to do anything unless I ask her to."

Where to Find Equines

Interested in learning more about horse-assisted therapy? Check out the following local programs.