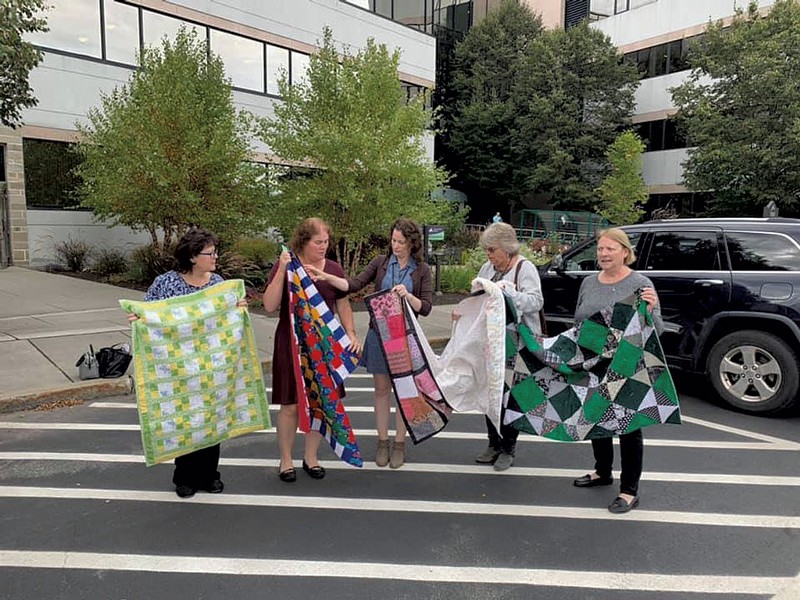 On March 24, 2018, the day she finished radiation treatment for breast cancer, Joyce Irvine's grandson Gordon turned 2 months old and was diagnosed with stage four neuroblastoma. The childhood cancer that develops from immature nerve cells had invaded his stomach, liver, kidneys and heart — "like an octopus with tentacles," Irvine said — and he spent the next eight months in and out of the hospital.

While in Virginia to help her daughter's family that year, Irvine, who lives in Colchester, saw her grandson come home from the hospital with little quilts. "And I'd be like, 'I didn't make that quilt.' Because I had been a quilter for many, many years." That's when her daughter told her, "They've got something called Project Linus here."

The 24-year-old nonprofit organization, Irvine learned, provides homemade blankets to childen who are seriously ill or who have suffered trauma. The retired teacher and principal — she taught at St. Francis Xavier School in Winooski and worked as principal in Waterville, Belvidere, Burlington, Highgate and Essex Junction — had found her next calling. "When I got breast cancer, I started making quilts again and ran out of people to give them to," she said. She shipped 20 to the Fairfax County, Va., chapter of Project Linus. "So, Annabelle, their chapter coordinator, called me one day and said, 'You know Joyce, you're making enough quilts that you could start your own chapter even if nobody wants to join.'"

And that's what she did.

Irvine applied to Project Linus March 1. She completed an interview, was accepted on March 15, papered the state with 1,000 fliers to solicit donations and received her first blanket April 1. In the seven months since, 149 "blanketeers" have made 459 blankets for her nascent group, known officially as the Chittenden, Lamoille and Franklin counties chapter. Project Linus has nearly 300 chapters nationwide, but only one in Vermont. "We've been covering border to border," Irvine said.

So far, all donations have gone to the University of Vermont Children's Hospital, where they are matched with colorful, donated pillowcases and stuffed animals to transform "very sterile and hospital-like" rooms to inviting, homey, cozy spaces, said Jess Rabidoux, a certified child life specialist at the hospital. "You can just see the parents relax a little bit" when they see it, she said. Some children seem excited and happy; others close their eyes and snuggle with the blanket, which is theirs to take home.

Rabidoux experienced the positive effects of Project Linus firsthand in late September, when her 12-year-old daughter went to the emergency department with severe abdominal pain and was admitted to be monitored for appendicitis. The colorful blanket, pillowcase and stuffed animal "made a big difference to her," Rabidoux said.

Other individuals and organizations donate blankets to the hospital, so Irvine's effort isn't unique, but it is much appreciated. "We definitely needed her help because we weren't able to keep up the supply with the demand," Rabidoux said.

Irvine accepts blankets — from crib to twin size — that are knitted, crocheted, quilted or fleece and designed for children ages 1 to 18. She asks that they be washable, smoke-free and not made of wool, which irritates some children. Donations of yarn, fabric and money are also welcome.

Irvine and her husband, Paul, have put thousands of miles on her 2016 Ford Fusion driving around the state posting fliers, collecting donations and getting to know knitters, seamstresses and quilters, including the Crafty Ladies in St. Albans, a clutch of National Life Group employees who knit during their lunch hour, and the students in a knitting and crocheting class at Champlain Valley Union High School.

Adults with developmental disabilities at Northwestern Counseling & Support Services in St. Albans tie five fleece blankets for Project Linus every month. The crochet group at Birchwood Terrace Rehab and Healthcare in Burlington donated an afghan. While Irvine was there, a resident tearfully approached and said she wanted to help. She had suffered a stroke and can no longer crochet, but she can tie knots, Irvine said. So now, she and other residents complete a fleece blanket every week.

A Brandon woman called to say that a veterans' center no longer needed the quilts she and her 92-year-old mother made for them and asked if Project Linus would like them. "So my husband and I took a ride down to Brandon . . . and I was expecting about 15 blankets," Irvine said. "I got 59 blankets."

"It has just brought out so many beautiful stories that I can't even express it . . . " Irvine said. "When I first started, I thought I would get 20 blankets, maybe, a month. And the first month, we took in 70. And this past month, in September, we took in 174."

Irvine herself can whip up a panel quilt in two hours. She has been cancer-free for two years. Gordon, who will turn 2 in January, still has lots of doctor appointments and a tiny, inoperable tumor on his aorta. The hope is that it will calcify and present no more threat than a mole, Irvine said. "He's a normally developing child who lives with cancer every day."

Blankets and donated yarn fill Irvine's dining room, and Project Linus fills her time — easily 40 hours a week — but Irvine, 66, plans to run the chapter as long as she can, she said. "When Gordon was hospitalized, people gave to him and it's our way, as a family, of paying it forward in his name."