Are Vermont schools prepared for shootings or other emergencies?

Parents are also urged to talk to their principals about where they should go in the event of an actual emergency. In most cases, emergency responders urge parents not to go directly to the school, as they can block access for emergency vehicles and put themselves or others in harm's way.

Finally, ask lots of questions — and demand answers. If you feel your school isn't doing enough to plan for a crisis, notify the Vermont Department of Education and/or Vermont Emergency Management. Using the state's Vermont School Crisis Guide isn't mandatory, but planning for the unthinkable is.

Something was up at Bellows Free Academy in Fairfax. As I walked up to the school on a recent Friday at 10:23 a.m., an alarm was sounding, but no kids were rushing out, as they would have for a fire drill.

Only one exterior door was unlocked; I went inside. From there, I reached a second set of doors. One yielded, so I let myself in.

The school was eerily deserted. More than 1000 people were in the building, but there were no signs of life. The main office was dark, locked and shuttered. I tried to go down one hall, but locked double doors barred my way. I tried another door but it was also secured. Isolated between them, I couldn't go any farther.

A woman with a clipboard approached me and asked, suspiciously, "Who are you? How did you get in here?" It was Sally Billado, an accounting clerk at BFA-Fairfax who also serves on the school's safety committee. Evidently, all exterior doors into the building were supposed to have been secured during this "clear the halls" drill and school-wide lockdown. After I explained I was a reporter researching a story on school-security procedures, Billado made a note of my presence on her clipboard.

Minutes later, we heard "All clear!" over the PA system, and the school quickly returned to normal. The halls filled with loud, boisterous children, seemingly unfazed by what they were rehearsing for.

Long before the deadly school shooting last December at Sandy Hook Elementary School in Newtown, Conn. — and even before the Columbine High School massacre in 1999 — districts all over Vermont have been preparing for disasters, both natural and man-made.

By law, every school in the state is required to have a comprehensive emergency plan and to hold drills monthly. Those that don't can be fined $500.

But the rules stop there: Schools aren't required to consult the Vermont School Crisis Guide, a detailed disaster-planning handbook that is considered one of the best in the country. As with many aspects of K-12 education in Vermont, it's up to local districts and school boards to decide how to allocate their resources.

That makes it difficult to get a comprehensive overview of statewide preparedness. Vermont's emergency-management professionals say that while many districts are well ahead of the nation, others are still playing catch up. They warn that those officials who aren't taking these risks seriously are operating under a false assumption that tragedies like Sandy Hook and Columbine could never happen in their schools. 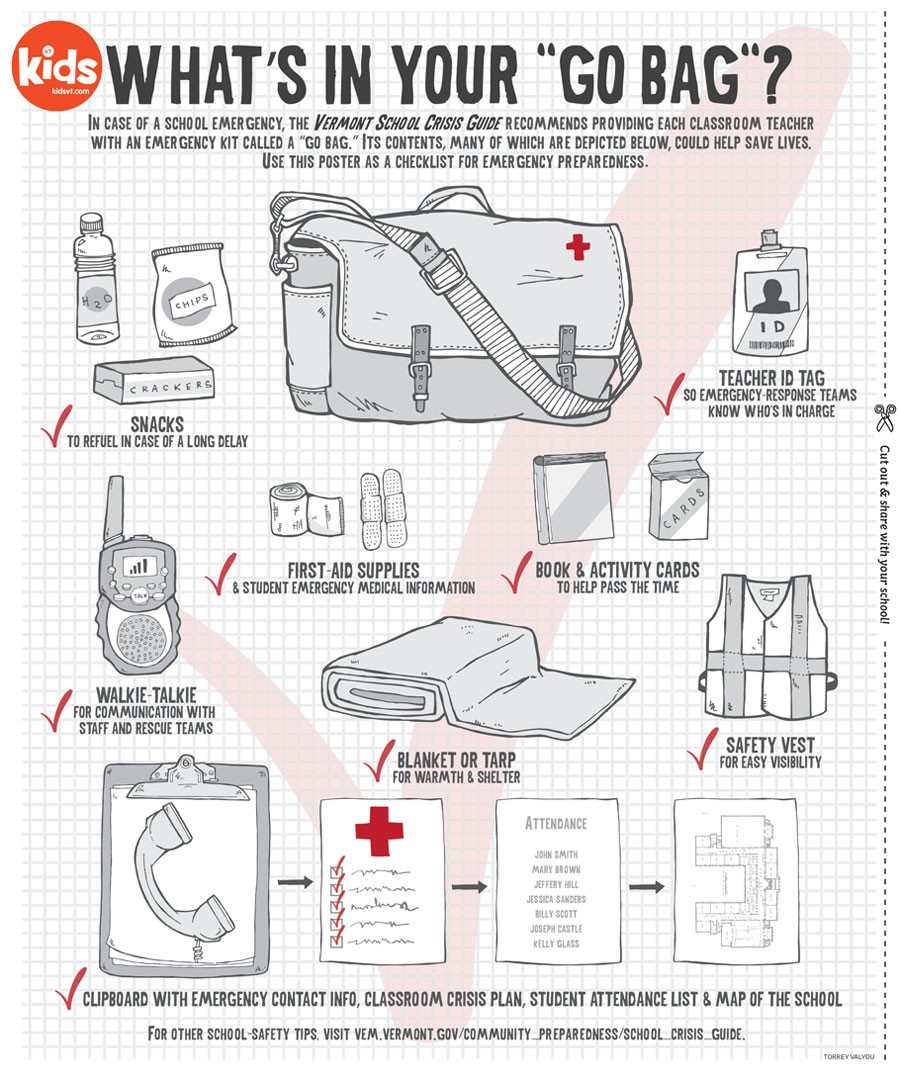 BFA-Fairfax is known as the "Home of the Bullets" — a reference not to the proximity of weapons manufacturer Century International Arms, but to the 1950s TV show "Superman," whose superhero was "faster than a speeding bullet." School officials there are working hard to ensure that their mascot is never grimly ironic.

"We're stepping up our game," affirms K-8 principal Tom Walsh, who says students and staff can now clear the halls in 15 seconds before "dropping the locks" on every door. A few years ago, Fairfax hired a New Hampshire consulting firm to review the building for safety. Since the school has 26 potential entry points for an intruder, the consultant recommended installing magnetic door locks, ID swipe cards and alarms.

During the drill I witnessed, one of those magnetic locks failed to shut properly, which is how I got in. That became a subject of discussion at the post-drill debriefing with the school's safety committee and emergency responders.

Ned Kirsch, superintendent of schools for Franklin West Supervisory Union, supervised the drill and understands its importance all too well. He was the principal at Essex Middle School when, on August 24, 2006, a gunman walked into nearby Essex Elementary School and opened fire, killing one teacher. The shooting happened before school was in session, so no students were in the building at the time.

"Practice is what you need to do," says Kirsch. "This drill is nothing new. We've been doing it for years, and we learn something new each time."

It was a similar drill that prevented more people from getting injured during the 2006 Essex school shooting, according to Leo Nadeau. The former Essex police chief notes that, during that shooting, teachers and staff were following procedures they had practiced: They evacuated the building and moved to a secure location.

Nadeau, who's now retired from law enforcement, is often credited with putting school-crisis preparedness on the radar in Vermont. In 1996, he was appointed vice chair of Essex's emergency-management office. At the time, his biggest concern was the potential for a catastrophic train accident in Essex Junction, which has 11 railroad crossings and nearly 4000 schoolchildren.

He pulled together all of Essex's emergency-services directors, as well as school administrators, nurses, guidance counselors and other district staff and began holding school-safety meetings.

Then, in 1999, just prior to the Columbine shooting, Essex experienced a rash of bomb threats, Nadeau recalls. Emergency planners and school officials around Vermont quickly realized that they needed a coordinated and universal approach to school safety. From those discussions came the Vermont School Crisis Planning Team, an all-volunteer committee of law enforcement, emergency management, mental health and education experts on which Nadeau still serves.

The VSCPT revises and updates the Vermont School Crisis Guide. According to those who have worked on it, the guide incorporates some of the latest strategies in school-crisis management, including lessons the U.S. Secret Service learned from interviews with school-shooting survivors.

Despite its depressing subject matter, the guide should be required reading not only for faculty, administrators and school-board members, but for parents, too. It details exactly how school personnel should respond to various threats, such as an active shooter, a bioterrorism attack, a hostage crisis or a riot — even severe weather or the death of a student.

The guide describes how school officials should notify parents, speak to the press or report a bomb threat to the FBI, and it includes instructions for a classroom emergency kit — see cut-out poster, page 18. It also covers planning for recovery in the days and weeks that follow.

The state stops short of requiring school administrators and local emergency responders to use the guide, but urges them to adopt it and tailor it to the specific needs of their school or district. Not surprisingly, some face unique circumstances that make crisis response challenging.

Linda Kelley is principal of the pre-K through 12 Rochester School, which has 150 students and a staff of 40 divided between two buildings. Kelley, who arrived at the school last summer, recently held a breakfast meeting with parents and other community members who wanted to discuss school safety. As she expected, the meeting was very well attended.

Since Rochester doesn't have its own police force, and only a volunteer fire department and EMS squad, the town relies on the Vermont State Police for its law-enforcement coverage. That means it could take as long as 45 minutes for cops to arrive on the scene of a school shooting.

Moreover, she says, the Rochester School is located in a mountainous area, where cellphone service is spotty. The school has a PA system, but it can't be heard in every room of both buildings. There are a few video cameras, but not enough to cover all the entrances. A limited number of two-way radios are not always effective due to the terrain.

One big concern expressed by parents, Kelley reports, is this: What would happen if children had to evacuate the building in the middle of winter? Most would not have time to get their hats, coats and gloves. The nearest shelter is at least a quarter mile away — a considerable walk, especially for the youngest students. As Kelley puts it, "The small things that once seemed unimportant are now becoming important to people."

Charles Johnson, Vermont's Safe Schools coordinator, travels around the state helping schools address a wide variety of potential threats, from bullying to ice storms, drug use to firearms. Johnson points out that in Vermont, it's impossible to have a one-size-fits-all approach to school safety. A place like the Rochester School, for example, has a very different culture, community and list of challenges than, say, Essex High School.

It's worth noting, for example, that the vast majority of Vermont schools either aren't large enough or cannot afford a school resource officer. SROs are sworn police officers assigned to the district either full or part time. Currently, there are just 46 SROs statewide, but according to corporal Mark Moody, who oversees the Vermont Youth Officers Network, school interest in hiring more "has begun to catch fire" in the aftermath of the Sandy Hook tragedy.

"In one town, the school-board members feel that Sandy Hook won't happen here. Or we don't need police at the door as they have at other schools," Johnson reports.

In another part of the state, Johnson got a call from a parent complaining that she couldn't get detailed answers on what her district was doing to prepare for a potential shooting, only vague assurances from the principal that "We're responding adequately."

In yet another district, a principal told Johnson that many of his students have special needs, including anxiety disorders, and "wouldn't do well" in a lockdown drill.

How did Johnson respond?

You are educators, he reminded the principal, so teach your kids how to be safe without frightening them.

Generally speaking, "I think we are probably better off than most places in the country," Johnson says of Vermont's level of preparedness.

The state's emergency planners agree — as do the feds. Just days after the Newtown shooting, Vermont Emergency Management got a call from the Department of Homeland Security in Washington, D.C. Officials there were looking for copies of the Vermont School Crisis Guide to send to states seeking guidance. The document is now also on the Vermont Emergency Management website. The benefits of public access apparently outweigh the risk it might end up in the wrong hands.

But local emergency offices emphasize that all the planning documents and safety equipment in the world won't do a thing if administrators, teachers and parents don't take these simulations seriously and practice them enough so they become second nature.

BFA-Fairfax has accomplished that. And Superintendent Kirsch is not alone in hoping its "clear the halls" routine never becomes more than just a drill.