Principals in Parenting: An Executive and a Principal on Rising Early, Eating Together and the "No Electronics" Room 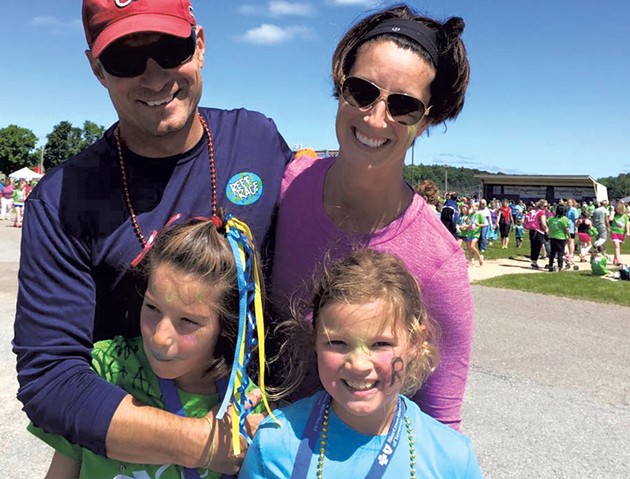 On an August evening, the impeccable green expanse of the Buntings' back lawn shows no signs of the 80 people who came to celebrate dad Adam's 40th birthday party the previous night — save for an empty keg by the patio. Although his actual birthday was back in March, the only gift Adam wanted was a backyard bash when the weather was warmer.

Last November, the Buntings moved from the Brennan Woods neighborhood in Williston to a more pastoral part of the town. It's a short commute for Adam to his job as principal of Champlain Valley Union High School and a 20-minute drive for MaryBeth to Dealer.com in Burlington. Their elegant house sits on 10 acres of land with trails carved into the surrounding tall grass and woods. Their huge living-room windows reveal a breathtaking view of the western sky.

The close-knit family of four spends as much time together as they can, given the adults' demanding jobs. Getting outside help with housekeeping and other chores allows them to focus on quality time together at the end of the day. They're also quick to point out how fortunate they are to have Adam's parents and brother's family living close by.

"I think we all bail each other out when we can," Adam says.

The family's affection for each other is evident in the way they talk, touch and laugh while prepping a dinner of pork chops and salad.

Adam: On the good days, I wake up early, like 6 a.m., and go for a 20-minute run. Meanwhile, MaryBeth has gotten up and got the girls up and gives them breakfast.

MaryBeth: Adam has to be at school earlier than I have to be at work, so during the school year, for the most part, I am in charge of the morning.

Adam: But since we live so close to school now, I can wait with them for the bus at 7 a.m. on my way out. Our history has been: MaryBeth does mornings, and I do afternoons.

On who does what:

MaryBeth: There's still that traditional part of what we do, that I'm the one who's like, OK, what days of the week do the girls have dance? What days of the week does Madeline have cross-country? OK, I need to find care for this. It's back to school, so whose shoes don't fit? It's on me. As much as we want things to be equal since we both have equally demanding jobs, I have held on to some of the more traditional roles more than I ever thought I would have, so the process of letting go has been hard, like, for example, cooking and grocery shopping.

On the importance of family dinners:

MaryBeth: We get home and, for the most part, we have really simple dinners and we sit down to eat together. We don't do a lot of, Oh, let's feed the kids first and then we'll sit down and eat later. Sometimes it means the kids eat late, but at least we eat together.

Adam: That's been my thing. I feel sort of off-center if we don't do that.

MaryBeth: They are at fun ages — it's hilarious.

Adam: Dinners are so fun right now. It's ridiculous some of the conversations we have.

On the evening routine and screen time:

MaryBeth: The girls will come home from their activities and take a shower and might watch 30 minutes of TV. So by the time we get home, all that's done, and we can just be. That's the goal; it doesn't always happen.

Adam: The agreement we came up with this year is: From 6 to 8 p.m., cellphones away, no screen time. No divided-attention time.

MaryBeth: For the whole family. Because they will go to bed, and we will work more.

Adam: And [9-year-old daughter] Rosie has been awesome. She dubbed that back room the "no electronics" room. It's more a rule for us actually — not them!

MaryBeth: It's really for me!

On the lack of adult time:

Adam: That's probably the thing we are not good at — balancing time as a couple.

MaryBeth: On a Friday night, dinner out with my husband or movie night snuggling with kids? We always pick movie night over date night!

Adam: Yeah. I don't regret that. I think we have a real deep faith in the other's resilience.

MaryBeth: I agree with that completely. We don't take ourselves too seriously. We laugh at ourselves a lot.

Adam: Well, we should! I mean, look at my car! [Adam smashed the rear window of his SUV returning tables after the party.]

On putting work into perspective:

Adam: There are definitely times when the work affects my energy and, after my first year as a principal [four years ago], I was a mess. I had nothing left for MaryBeth or my kids. So it showed me that we need to be really thoughtful about remembering that our work is like a marathon — as opposed to the sprints that we make it.