It wasn't your typical keynote presentation. Lida Winfield got personal at the Vermont Association for Middle Level Education's annual conference in March.

"I'm warning you. My work is weird," she explained to a ballroom of 250 middle school students and educators at the University of Vermont's Davis Center. "I don't have a PowerPoint. I'm going to take my shoes off. I might cry."

The 36-year-old teaching artist and Burlington resident was preparing the audience for her performance piece, In Search of Air: Growing Up Dyslexic. Like many of the conference's participants, Winfield attended Vermont public schools; her performance documents the academic difficulties she encountered there.

Accompanied by slow music, Winfield strode gracefully to an area in the front of the room that served as her makeshift stage. The five-foot-tall artist wore a long, white, sleeveless cotton dress that revealed a tattoo — of dancers holding hands under a tree — on her upper arm. With a sparkle in her eye, small stud in her nose and pixie haircut, she resembled an edgy version of Tinkerbell, though her dancer's posture and confident bearing gave her a much larger presence.

Over the next 40 minutes, Winfield used storytelling and dance to chronicle her journey as a learner. As she pretended to jump rope in a childlike way, she explained that, as a first grader, she couldn't read as well as the other kids in her class. Her teachers didn't give her extra time to practice; instead, at recess, they made her sit inside on a stool facing the playground. Occasionally, they made her wear a dunce cap.

The next year, she was diagnosed with dyslexia. Her academic struggles led to feelings of shame and anger, which she demonstrated during the performance by screaming, twirling and stomping repeatedly. But Winfield found her salvation in dance and theater, earning lead roles in her high school plays and participating in a women's dance company. "I spent my days feeling invisible and my afternoons feeling like a star," she explained.

In a soft, measured voice, she revealed that when she was 17, her mother — who she says was her biggest advocate — was diagnosed with cancer and died a few months later. When she graduated from high school shortly afterward, she was reading at a second-grade level. She realized, as she held her diploma in her hands, that she couldn't even read what it said. 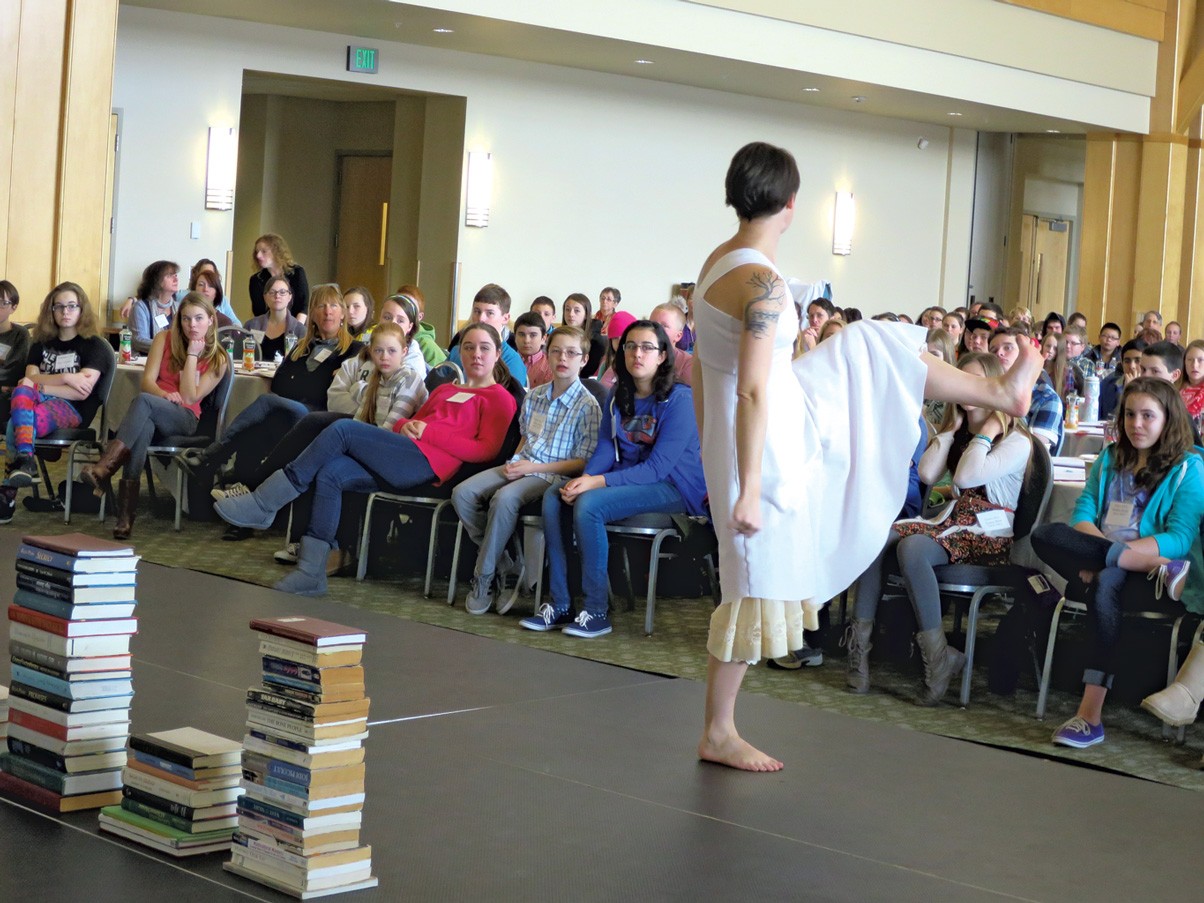 Winfield doesn't identify the school that gave her that diploma. Though she is often asked to name the schools she attended, she prefers not to because, she said, she doesn't want to assign blame. She believes that her story could have happened anywhere.

But she doesn't want it to happen anymore. The show is one of the ways in which Winfield is trying to improve the educational experience of today's kids. She has performed In Search of Air dozens of times since 2011, for middle and high school students and teachers all over New England, and at educational conferences in Orlando and Mexico. At a time when educators everywhere are trying to teach students — and teachers — to tolerate and respect differences of all kinds, her show offers a creative way to start the conversation.

Essex Middle School teacher Lindsey Halman invited Winfield to present the piece at UVM. Halman, a VAMLE board member, had seen Winfield perform it several times before; she had also worked with Winfield through the Flynn Center's Words Come Alive program. The VAMLE conference brought students and educators together to devise ways to create more respectful and socially inclusive schools, and Halman thought the presentation could help.

"I always find that the keynote sets the tone for the day," she said. "I felt like it would be really powerful for these student leaders to see that we all have our own inner struggles, and we can rise above them and create change."

Winfield started her upward trajectory at Landmark College in Putney. At that time, in the late 1990s, it was the only college in the world established to serve students with learning disabilities. Gov. Peter Shumlin, who also has dyslexia, was a founding member of the school's board of trustees.

Teachers there recognized Winfield's academic strengths for the first time. She credits a professor there, Virginia Scholl, with helping her break down barriers to learning. Scholl employed experimental, kinesthetic techniques — learning by doing and moving, rather than by listening and watching. She had Winfield do jumping jacks while spelling out loud, and move around while writing on giant pieces of paper hung on the wall.

"She realized I felt a sense of joy and accomplishment connected to being a mover and artist," Winfield recalled in an interview prior to her performance. "She used my body and creativity to help me learn to read."

But her struggles weren't over. "I wish I could tell you that this is the end of my academic story," she told the audience. "I wish I could tell you that lives are like light switches and you just turn it on." Instead, Winfield described how she entered a cycle of enrolling in a college, then dropping out to pursue her own art. It took her 12 years to complete her BA, which she ultimately received from Goddard College in Plainfield. She stayed at Goddard to get her master's degree in interdisciplinary arts. That's where she developed In Search of Air.

At the end of the piece, Winfield explained that as an adult she still struggles with seemingly simple things such as reading a map, doing multiplication and spelling the word broccoli. But she's made accommodations that include buying a GPS, using a dictation program for her writing and paying someone to edit her work. Her final words were uplifting ones. "This is not just a story about me," she said. "This is a story about the transformative power of art."

Halman's Essex Middle School students reflected on the presentation. For eighth grader Anika Clarke, Winfield drove home the message to "be proud of yourself, because we're all different." Seventh grader Lily Davis was moved. "I felt really emotional. I was almost crying," she said. But the performance made her realize "you have to be comfortable with who you are."

Winfield always follows the show with a question-and-answer session, in which she tells the audience, "You can ask me anything." She said teachers often inquire about how her educational experience could have been better. Winfield doesn't have a clear-cut answer, though she thinks that programs that incorporate kinesthetic learning would have helped her.

As an adult, she brings that type of programming to Vermont students. In addition to her role as a performer, Winfield is an educator and teaching artist through Words Come Alive, an arts-integration program for students in kindergarten through eighth grade. The program partners with 23 schools in the state, in towns including Burlington, Winooski, Shelburne, Starksboro and Hinesburg.

Classroom teachers and Words Come Alive teaching artists team up to develop and co-teach academic lessons using drama and movement. They might create a dance to show the life cycle of a plant, for example, or they'll act out a historical event. Using arts in teaching isn't just fun; studies have shown that it can improve kids' cognitive functioning as well.

Winfield has worked with students at Essex Middle School's Edge Academy for the past three years. Recently, she worked with Halman on a unit about the 2014 Vermont Reads selection, Wonder by R.J. Palacio, a book about a fifth-grade student born with a facial deformity. Eighth grader Yasmine Nsame recalls how Winfield helped to facilitate a discussion comparing the stylistic choices authors make to those a choreographer makes. "It brought a new way of learning to our class," she said.

In previous years, Winfield has collaborated with Halman on a science unit, teaching kids to move their body like different kinds of sound and light waves. "Middle schoolers sit a lot, so when they get up and move and are asked to take risks, they really remember things," says Halman. "It's not comfortable work. But I feel like it's the most powerful and important work that we do."

Words Come Alive program director Stacy Raphael said one of the values of the program is that it "gives kids so many different modes of expression to show what they know." Schools are often biased toward linguistic and mathematical learning styles, she said, but Words Come Alive puts value on social, interpersonal and kinesthetic ways of learning. This means that kids who aren't always successful in a traditional school setting have a chance to shine.

Winfield gives high schoolers that chance, too — namely the students in Burlington High School's Excellence for English Language Learners (ExcELL) program, a "landing pad" for Bhutanese, Congolese, Somali, Iraqi and Vietnamese students who've recently come to the United States. The ExcELL class, which was created this school year, meets every morning for an hour and a half and is co-taught by BHS teachers Beth Evans and Suzy King. Winfield comes most Friday mornings to work on community building and vocabulary using movement and drama.

During a recent session, Winfield wrote words on the whiteboard. Students in a big circle took turns saying them — walk, jump, hop, smooth, rough and sharp — and acting them out with their bodies. When everyone had taken a turn, Winfield had them high-five each other in celebration. When someone made a mistake, she smiled and waved her hand with a casual "No problem, no problem." Students then worked in groups of three to choreograph a sequence of movements demonstrating the concepts of "open" and "close."

Later in the class, students went around the circle practicing sentences about what they ate for breakfast that morning. When Joseph Mwali, an 18-year-old student from the Congo, said he ate cake, Winfield exclaimed, "Fun! I want to go to Joseph's house!"

"She's always ready to play," observed Evans, noting that Winfield teaches kids that it's OK to laugh about making mistakes. "Students don't necessarily realize they're learning, because they're having fun," Evans added. She suggested that Winfield's academic challenges give her a better understanding of what these students are going through. "I think a lot of people have sympathy for my kids," Evans said, "but Lida has empathy."

One might imagine it would be difficult for Winfield to spend the majority of her working time in schools, the source of so much pain for her. But, she said, "for the most part, it's really nice. I like people and I like learning." Still, she said, schools don't feel like they've changed much since she was a kid. "I feel baffled that teaching empathy and creativity isn't more valued in a world that's a mess."

Winfield said she'll continue to present In Search of Air in schools, both locally and nationally, to highlight the importance of arts integration and kinesthetic learning. She returns to Landmark College whenever she can to perform and lead workshops; Virginia Scholl still teaches there, and has seen In Search of Air many times.

With backing from the Flynn, Winfield is also working on a new community-based performance piece. In it, she plans to partner adults from different walks of life, have them swap stories of courageous and cowardly behavior, then perform each other's stories as if they were their own. She said the piece will build on what she's already doing in schools.

"I think at the core it's about recognizing how big the world is," she said of her work, and that there are "so many ways to be in it and so many ways to learn."