Parent Trap: Has Technology Made the Toughest Job Any Easier?

Last year, while nursing my infant daughter, Joni, in the wee hours, I found solace in the glow of my smartphone. When she wouldn't go back to sleep, I'd pop in my earbuds and bounce with her on an exercise ball. Instead of despairing in my exhaustion, I'd listen to the wise words and gallows humor of fellow new moms on the parenting podcast "The Longest Shortest Time."

I became a mother at a time when technology pervades nearly every aspect of life. Hardly a day has passed that I haven't snapped a photo of Joni on my iPhone — and been tempted to share it on Facebook. If I were a more type-A parent, I could download apps to track her bowel movements, development and sleep habits.

My first 18 months of parenting have been vastly different from my own mother's experience. What's more surprising is that they've also been quite different from Kids VT managing editor Alison Novak's. Less than six years have passed since Alison's youngest child was born, but so much has changed. She was surprised to learn recently, for example, that she could download an app to turn her smartphone into a baby monitor for friends visiting with an infant.

The iPhone has only been on the market for eight years, yet many parents of young children today can hardly imagine life without it. Tech companies increasingly sell the notion that devices and apps can make our lives better. But is raising children really getting easier in the smartphone era?

To find out, I surveyed our readers. A couple dozen, ranging in age from 31 to 64, filled out our parenting and technology survey online. Nearly all respondents under 40 named their smartphone as the single piece of technology they couldn't parent without. The older respondents were more likely to say there's nothing tech-related they wish they had back then — though a few admitted a digital camera would have been nice.

I also spoke with a tech-loving dad of three. I reached out to a Waldorf educator with grown children. And I asked the closest source I have, my own mom: Is there any technology available now that would have made your job easier when you were raising children?

"I really wish we'd had social media that allowed me to connect with other moms," my 65-year-old mother told me. "When I had my first child [in 1981], I didn't know anyone else who had kids. I didn't have a community of moms to turn to."

FaceTime would have been nice, too, she gushed. "Especially when Dad was working nights, so he could say goodnight to you."

And she would have liked today's high-tech strollers and other baby equipment. "We had the crappiest equipment," she said. "The whole concept of a car seat was new. They were solid plastic, so they didn't breathe. I'd take you out in the summer, and you'd end up in a pool of sweat."

I was thinking more about digital devices when I designed the survey, but other parents mentioned baby gear, too. The piece of technology that survey respondent Meredith Breiland of Milton can't live without is her jogging stroller, for example. "It probably did more for parents and their health than anything else," says the 37-year-old. Staying fit has always been a big part of Breiland's life. But finding time to exercise as a new parent can be nearly impossible. She sees the jogging stroller as a feminist statement: "I'm going to live my life and bring my kid with me. I'm taking control of my life."

She cites another technological advancement that helps with parenting, too — texting. Two weeks after she gave birth to her now-17-month-old daughter, Breiland texted with a far-flung friend who was in labor in the hospital. The two had recently reconnected over Facebook and discovered that they were both pregnant at the same time.

"I had just been through it, and she had questions," says Breiland. "And I was home and awake at three in the morning." Neither one of them would have thought to make a phone call at that hour, but exchanging texts seemed appropriate.

Now, with children almost exactly the same age, the friends keep in touch through text to discuss daily parenting struggles, like getting their toddlers to eat vegetables.

Rachel Spitzer-Firliet, a 31-year-old mom from Proctor, says her smartphone is a lifesaver when she's trying to find activities and events to go to with her 3-year-old. But keeping devices out of her son's hands is often a battle. And "having so much information at your fingertips can create a lot of fear," she says. "I try not to read everything I see on my Facebook feed. Otherwise I'd end up keeping my kid in a box in the closet."

Thomas Bacon of Colchester is the director of Young Hacks Academy, a coding camp for kids. He's also a dad to three children — 13, 10 and 7.

Bacon relies on his phone to solve all sorts of parental quandaries, such as how to dress the kids for the weather and what to do when he finds a weird welt on one of their legs. Says Bacon: "I know that, unfortunately, getting ahold of his primary care physician might be hard. But I can go online and find pretty trusted sources ... and, by the way, I can do that in 10 minutes."

He's ambivalent about many of the new products designed to help with parenting, though. "There are so many apps that continue to get pushed on parents daily, with the basic pitch that this will make your life easier, better," he told me. "I'm not totally convinced."

In fact, he finds the constant monitoring of children "annoying." "Parents are pushed into having a really short leash with our kids," he said, even though statistics show that children are safer now than they've been in 50 years. 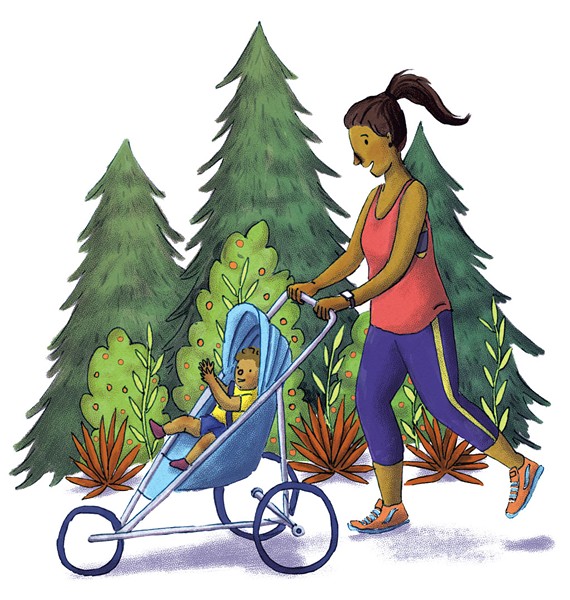 "It's crazy to think that when kids go to the mall these days, they have this tracking device in their pocket," he said, referring to the smartphone. "Frankly, I don't know if [having constant access to your children] is necessary."

"My sense is that technology is making parents more nervous, anxious, and I think it puts a filter between you and your child," she told me. Shapiro, whose children are now 36, 29 and 25 years old, believes her family "dodged a bullet" when it comes to the advent of social media. There's nothing available today that she wishes she'd had when she was raising her children.

Shapiro worries that parents are so distracted by their screens that they aren't teaching their children important lessons, such as how to work with their hands. "What are children learning about delayed gratification when parents are walking around with screens and responding immediately to them?" she wonders.

Shapiro doesn't own a smartphone, but her husband, she joked, is threatening to buy her one. She admitted that it might be helpful for navigation. "Maybe the GPS is the thing that my girls should have had when they were young," she said. "Maybe we would have found that park..."

Still, she said, sometimes not finding the park they were looking for meant finding something else unexpectedly. That serendipity is important, Shapiro said.

I agree. But I'm not convinced that the smartphone has entirely killed serendipity. Just because the phone is in my bag doesn't mean I use it. My daughter and I have met circus camels, watched bees pollinating flowers and made new friends on our frequent aimless outings around town.

But the days, as they say, are long, and a few mindless minutes of scrolling can feel like a much-needed respite. Parenting is still hard, despite the technological advancements of the digital era, and sometimes Mama just needs a break.

Here are some noteworthy responses from our Kids VT technology and parenting survey. Respondents were anonymous.

What single piece of technology could you not parent without?

"My cellphone. It is the central location of our family planning: sports, school, work, vacations, doctor visits..."

"The microwave — it allows me to heat stuff up fast, which is essential during sports seasons."

"Not a one. Because technology does not parent my children; I do. And to do that I must be able to hold them, play with them, have both eyes on them, speak to them, etc."

What current technology do you wish you'd had when your kids were younger?

"Wish I'd had a digital camera when the babies were little! I spent lots of time processing film, making newsletters by hand and then color copying them to mail to relatives out of state to keep them up-to-date with the babies ... fun, but time consuming."

"DVR. We only had kids' TV shows for set times of the day."

What current technology could you do without?

"Tablets. I seriously have to limit my son's usage. If I don't, he gets lazy and even forgets to use the bathroom."

"Facebook. It can be such a time suck and so tempting to delve into when I probably should be paying more attention to my children."

In your experience, has new technology made parenting easier?

"Yes. Reading a Kindle Paperwhite while nursing at night: genius! And Skypeing with grandparents in another country is an amazing gift to them and allows grandchildren to immediately accept them on visiting because they recognize them despite the infrequency of their visits."

"Yes and no. Yes for educational purposes; no for social skills and behavioral problems. I've been guilty of using it as a babysitter because it is so easy to occupy my kids. Unfortunately, I'm doing no one a favor."

"It is easier to stay connected to other parents via social media. Also, the rare instances I work from home make my commuting and job as a parent more manageable."

"Not really. I think that the day-to-day of parenting requires a hands-on approach. Technology can be a tool, but it is not a panacea."