Out to Eat: Papa Frank's 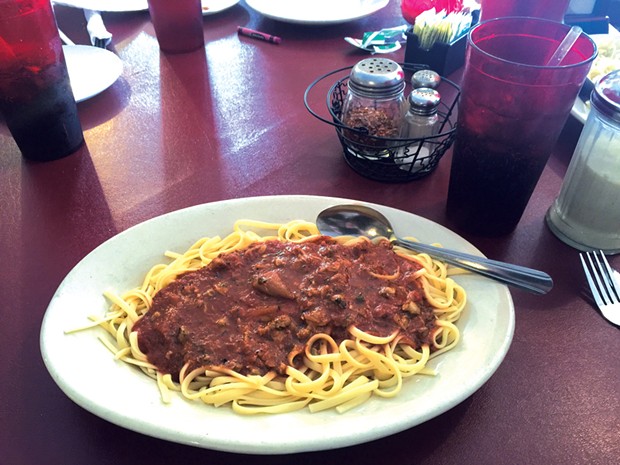 When our family of four wants to dine out without breaking the bank, we head to Papa Frank's. Years ago, before my partner Ann-Elise and I got civil unioned, before we had steady jobs and kids, we went there because we could eat half of our generous portions and save the rest for lunch the next day.

So much has changed since then — we're now gainfully employed Winooski homeowners with a son, daughter and real marriage license. And the Onion City's downtown has become a hipster haven.

But Papa Frank's has remained remarkably consistent — with the same creaky wooden floor, framed sports-car photos on the walls and decent, reasonably priced food. The menu doesn't say if the pasta is homemade or where the chicken came from, but it hasn't hurt their business any. On any given night, the place is filled with families enjoying no-frills Italian fare.

Ann-Elise, Graham, Ivy and I had an early dinner there on the Sunday after the end of Daylight Saving Time. I got my usual linguine with red clam sauce. Ann-Elise ordered the fettuccine alfredo special. Graham, 10, had a small buffalo chicken sub and Ivy, 7, chose a small cheese pizza.

While we waited for our food, Ann-Elise and I reminisced about the days when the kids needed high chairs and shared our meals. "Remember when we used to bring you here after we picked you up from daycare?" she asked them.

The kids barely acknowledged us. They were more interested in the picture Ivy was drawing on the back of a paper plate, using the restaurant's crayon collection.

Our two pasta dishes came with a half basket of garlic bread each, which we ordered with cheese on top. The bread arrived first, making a gooey and satisfying appetizer. The pasta, pizza and sub showed up shortly afterward, and we eagerly dug in. Graham and Ann-Elise finished almost all of theirs. Just like the old days, I took home enough for lunch the next day. We boxed up half of Ivy's pizza, too.

We each had a soda — I skipped my usual pint of Switchback — and a mini cannoli with rainbow sprinkles for dessert. Before tip, the bill totaled $46.82. While we settled up, the waitress found a spot for Ivy's artwork among the other colorful paper plates above the restaurant's take-out counter.

It was still light out when we left, so we walked off our meals along the Winooski Riverwalk as the sun lingered low in the sky.

Out to Eat The Money Issue Papa Franks