One To Watch: Sonia Nussbaum 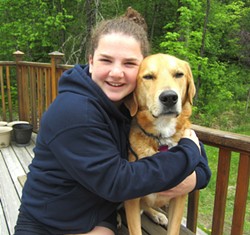 Sonia Nussbaum has made a big name for herself in the local animal-welfare world. So big that when she signed in at a Humane Society of Chittenden County event six years ago, the board member working at the table asked, "The Sonia Nussbaum?"

That's because Sonia has been helping the humane society since she was in kindergarten. At her sixth birthday party she invited her guests to bring animal treats and toys that she later donated to the shelter.

The following year, she considered asking her first grade class to contribute to the HSCC but then thought, Why not the whole grade? Ultimately, her hand-lettered fliers soliciting donations went home with every student at Richmond Elementary School, and a weeklong collection ensued.

Sonia ran the school's HSCC drive for two years and a community-wide drive for the next four. In addition to countless blankets, towels, dog collars, cat beds and bags of pet food, she has collected more than $19,000 for the HSCC's annual Walk for the Animals over the years. Sonia has been the highest youth fund-raiser at the walk for each of the last seven years.

"I kind of feel like she's been doing it [since] before she could actually write," says family friend Rod West, who promoted Sonia's community drive on a sign at his Richmond business, Blackfork Towing. What's more, he says, "It always felt to me like it was Sonia's thing and not mom and dad's."

Susan Nussbaum followed her daughter's lead, serving on the HSCC board for four years. "When I got on the board, and we had to go around the table and introduce yourself, I was 'Sonia's mom,'" she says.

Sonia credits her parents with teaching her about philanthropy. Her love of animals seems to be inborn. The Nussbaums have always had a dog, and there's a dog in most of Sonia's baby pictures. "You know how you prop up a baby on a pillow? Like, I got propped up on the dog," she says. When other kids were in their dinosaur and princess phases, Sonia lugged home the Encyclopedia of Dogs from the library.

In the fall, she heads to Mount Mansfield Union High School, where community service is required. "Of course, I'll do it [at the HSCC]," she says. And then? "I want to be the CEO of the Humane Society of the United States." She's said as much to Wayne Pacelle, the man who currently holds the job. She's met him twice.

Green Mountain Animal Defenders president Sharon MacNair says she would love to hire Sonia first. "I think it's clear that she will change the world, especially for animals, in a profound way."

"One to Watch" shines a light on a young Vermonter who is going places. Know a local child, age 17 or under, who's recently done something amazing? Nominate him or her here.