Natural Builder: A Longtime Treehouse Designer Reflects on His Lofty Line of Work

For most of us, treehouses are just a fun place to play. But for Warren resident James "B'fer" Roth they've also provided a career path that included a stint as a reality TV show star.

Roth, 61, goes by B'fer — a shortened version of "B for Burton," his middle name. Like the branches of a tree, his life has led in many different directions.

His roots are in Ann Arbor, Mich., where he grew up in the 1950s and '60s with three siblings in a home his dad designed and built. After completing two years at Michigan State University, Roth hitchhiked around the country, then "stumbled to Vermont," where he graduated from Johnson State College with a bachelor of fine arts degree in 1982. He worked as a rustic furniture maker and instructor at Waitsfield's Yestermorrow Design/Build School and, in his late 20s, lived in a treehouse he constructed himself.

In 2000, Roth embarked on a gig as chief designer and builder at Forever Young Treehouses, a nonprofit cofounded by Bill Allen and Phil Trabulsy. The organization built universally accessible treehouses, including ones at Camp Ta-Kum-Ta, a Colchester program for children with cancer, in 2001; the Hole in the Wall Gang Camp in Connecticut, the Paul Newman-founded camp for children with serious illnesses, in 2002; and Oakledge Park in Burlington in 2004.

In 2005, Roth helmed a million-dollar project funded by the Annenberg Foundation to build California's first public, universally accessible treehouse at Wilson Park in Torrance. The 2,500-square-foot structure with meandering wooden pathways and whimsical rooflines was constructed from oak trucked in from Oregon.

About eight years ago, Roth and a former student, Chris "Ka-V" Haake moved on from Forever Young Treehouses, forming the treehouse design/build company Treehouse Guys LLC. The pair continue to build structures both big and small. Recent projects include a backyard structure with a fireman's pole that overlooks a stream in New Hampshire and a deluxe dwelling in Tennessee with electricity and plumbing built to be rented on Airbnb.

Roth's career took an unexpected turn in 2014, when a production company tapped him and Haake to star in a reality show, named "The Treehouse Guys," in which they and several other expert builders traveled around the country making custom treehouses. The show aired on the DIY Network for three seasons.

"I pinch myself that this is my job," says Roth, who describes his work as both "artistically satisfying" and "soulfully satisfying."

In July, he shared some of the wisdom he's gleaned from the trees with Kids VT. 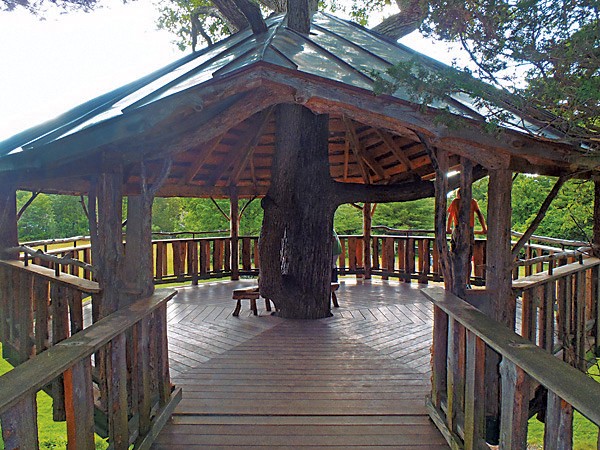 On how being raised in a house his dad built informed his career path:

As a kid, my brothers and I always had hammers in our hand. We were always helping Dad. I think a lot came from the fact that my dad actually built and designed our house, and that's kind of in my blood.

On building a treehouse outside of Warren to live in after college:

I lived in it from age 25 to 30, five summers and falls. I courted my wife to be — my current wife of 29 years — in the treehouse. So, those years were good years. I never had one as a little kid so, when I was 25, I just got a bee in my bonnet that I wanted to build a treehouse to live in.

The first floor was 20 feet off the ground and it took two flights of stairs to get to. And it was octagonal, all around a big maple tree that split into three. Every floorboard I cut by hand from skinny to wide, like sunrays. So, just starting with the floor alone, it was a piece of art. Everything I could do to make really wacky details, I did, and therefore, it took forever. It wasn't like, Oh, I'll be done in a month, like I told my buddy who lent me the land. (He laughs.) It was a little more than a month... It was a labor of love, absolutely.

On meeting Paul Newman while building a treehouse at the late actor's Camp Hole in the Wall:

Paul Newman was just salt of the earth, just one of the sweetest guys you could ever meet... He was just a regular guy, just wonderful.

You know, anyone who wants to have a treehouse and they can afford to — whether it's 20 or 30 or $100,000 dollars — they have the option of buying a convertible or a Maserati or a condo at Daytona Beach; but they do a treehouse. They've gotta be cool.... So, by and large, our clients are just really cool, and 99.9 percent of the time we've just had great relationships. And that, to me, is more important than anything else... I encourage clients to keep it simple, just get back to nature and get back to simple living in the woods. There's the childlike connection, but also that nature connection.

On what he says when people ask if he has a favorite treehouse:

That question is always asked and my answer is always the one I'm currently designing and building. (He laughs.) I think all the ones that are wheelchair-accessible are my favorite.

On making a living building treehouses for almost 20 years:

It's a career path I didn't see coming, but once it presented itself, then it just took off... My mom, when she was still with us, had the best expression, which was "Who'd of thunk it?"