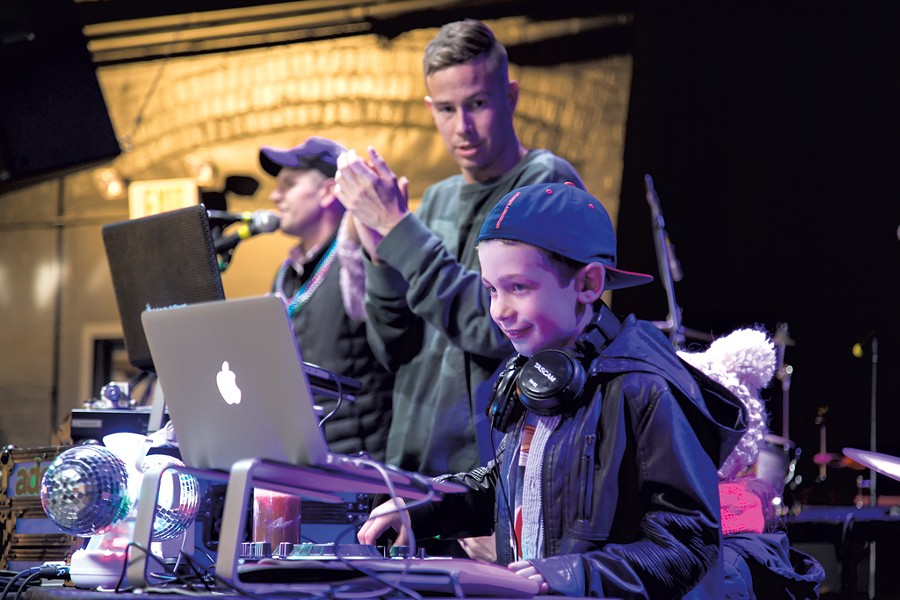 Disco lights throw flashing medallions over a darkened dance floor. The music is thumping, the crowd is rocking, and the DJ is 10 years old.

Dancers may be able to see only the top of his head bobbing behind the controls, headphones clapped over a baseball cap. Clean-cut, freckled and resembling a slim Beaver Cleaver, he is Zane White: Richmond Elementary School fourth grader by day, DJ Zandro by night.

That's ZAHN-dro. "He prefers the Italian pronunciation," says his mom, Brooke White. People would know that, he points out, if she hadn't squelched his social media presence.

That will come in good time, she tells him.

Already, hundreds have learned his name. In the last three years, old-fashioned connections and phone calls have landed him gigs all over Burlington. He has played at Nectar's and Half Lounge, a sales event at Ecco clothing store and a monthly residency at now-defunct Bugatti Barbers. Last fall, he supplied the soundtrack for a fashion show at an upscale Boston boutique. On March 31, he will co-host the third annual To the Max Dance Party at ArtsRiot, a benefit for Boston Children's Hospital. With 280 attendees last year, it's his biggest — and favorite — event. Each of the last two parties raised more than $10,000.

Zane has found his groove. And it came at the perfect time. Three years ago, his only sibling, Max, then 5, was diagnosed with Ehlers-Danlos syndrome, a genetic disorder that disrupts the production of collagen. Collagen, his mom explains, acts like the glue that holds the body's cells together. "So it affects literally every system in his body," Brooke says.

The diagnosis led to about 15 sub-diagnoses, including an unstable cervical spine, hernias requiring multiple surgeries, and a rare vascular condition that puts Max at risk for aneurysms and arterial tears. He goes to Boston Children's Hospital at least 12 times a year. That first year, he went nearly every week.

"Sometimes I think it was hardest on Zane of our whole family," Brooke says, "because he was watching, and he had to watch emergency ambulance rides." Zane, who was 7, exhibited typical responses to stress, says his mom, a psychologist. He had difficulty sleeping and trouble focusing at school.

Then, while Brooke and Max were away in Boston one time, Zane and his dad watched an online video of Swedish DJ Alesso. Instantly enthralled, Zane began to copy him and to put on shows. Family videos show him in his grandparents' backyard behind a blanket-draped table bouncing to an electronic beat. He points confidently, shakes his index finger, swings his arms and then leans forward, rocking his shoulders as he maneuvers his pretend controls. The music builds, and he yells to his audience, "Let me see you jump!" And then he jumps, pumping both hands, fingers spread wide, to the sky.

It was the perfect therapy. "There's no question," his mom says. For some of those early shows, Zane tore up toilet paper and directed his "manager," Max, to fling it into the air to simulate pyrotechnics. "It really just gave him his confidence," Brooke says. "And it gave him something to focus on, and it just let him feel really positive again during a time that was hard."

While still 7, Zane started taking lessons at Burlington's Studio 5, a DJ training school for kids and adults where Jason Baron — aka D Jay Baron — was lead instructor. "There is nobody else I would have wanted to fall into my child's life at that time," Brooke says. A professional DJ who plays clubs, weddings and events for companies, including Burton and Red Bull, Baron continues to teach Zane the technical aspects of blending songs, the business side of creating events and landing gigs, and how to read a crowd. Baron performs with Zane at most shows.

Zane stores music — mostly EDM (electronic dance music) and Deep House — on his MacBook Air and blends it using his Traktor professional DJ controller. "He is producing music live in front of an audience," Baron says.

His first gig was a friend's 7th birthday party. Now, he hopes to land school dances, and he dreams of playing at Tomorrowland, a massive electronic music festival usually held in Belgium, and the New England Patriots' Gillette Stadium, even though he doesn't like the home team. "It's a popular stadium," he says matter-of-factly, "so I might as well just play there."

He aspires to learn to make music, which DJs do using computer software and by manipulating their own keyboard recordings as well as song samples from other artists. "His future's bright," Baron says. "He's interested in packing stadiums." And that's possible, Baron says. "Oh, absolutely."