At the beginning of summer, the mural beneath Garlands Bridge in Lincoln was faded and peeling. Created six years ago as part of a summer camp led by Lincoln artist Rory Jackson, it featured overlapping colorful silhouettes depicting both community elders and youth.

This summer, Jackson organized a new group project to refresh the mural. It wasn't just the peeling paint that prompted it; he wanted to bring local kids together to "work on a community project that would unify them," he said. "We needed to put energy back into the community that's been given this cloak of separation for the past two years."

To find that energy, he collaborated with another local artist: Judah Jackson, his 15-year-old son. 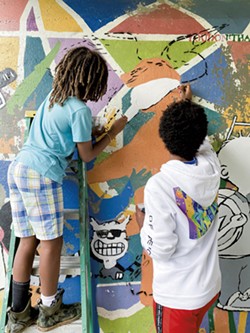 A sophomore at Mt. Abraham Union High School, Judah has been drawing comics for years; he exhibited some of his work last year at Bristol Cliffs Café. The new mural design includes some of those drawings, as well as new ones he whipped up on the spot.

"His illustrations capture the joy that is in young people," his dad explains. "They give off light and youthful joy and a certain perspective of reality that you start to lose as you get older."

Although Judah comes from a lineage of artists that includes his dad, his grandmother Anne Cady and great-uncle Woody Jackson, his style is all his own. Said Rory: "I just stay out of the way and provide him with the materials."

"It's a public project. It's not for anybody to keep; it's to share." Rory Jackson tweet this

Judah draws his inspiration from cartoons like "Calvin and Hobbes" and "Peanuts." "I've always been into reading comic books," he said. "I remember, as a kid, going into that whole world and feeling happy because the characters could be someone that I could learn from and look up to."

He also draws from life; many of his illustrations are based on his former peers at Lincoln Community School. "I like to think about how characters in my life might be someone that I would read about," he said. "I like to look at little experiences I've had or little moments I've shared with other people."

To share those moments with a wider audience, Rory recruited kids from Lincoln and Bristol, ages 9 to 14, to participate in the mural project. Eight different young artists took part in each of three weeklong sessions.

They alternated between spending days inside Rory's Bristol-based art studio and painting on-site. In the studio, they projected Judah's comics onto huge pieces of paper, hand-cutting intricate stencils that they later transferred onto the mural wall, 86 feet in width. Some sections are more than nine feet tall.

Rather than start fresh, they kept the background of the old mural. The layering effect represents the way young people grow up and graduate to the next stage of their lives, while new youth arrive to take their places, said Rory. "It captures that layering and that weaving of energies."

Though Rory organized the sessions, Judah worked with the kids. "He took responsibility for everything," said Rory. "He did amazingly well encouraging and including everyone equally and working with the kids who weren't as confident to make them feel like they had a role to play that was important."

The groups also crafted horizontal lines of quotes that the children proposed themselves and voted on.

"We wanted to help the kids understand that a quote is not just what somebody said, but how someone affected the way you think about things and how someone moved your perspective," said Judah. He contributed a quote by Tupac Shakur: "They got money for wars, but can't feed the poor."

Despite the stormy July weather and the physical challenges of the steep terrain, the group managed to complete the project on July 31.

"It's a public project. It's not for anybody to keep; it's to share. For me, that's a beautiful thing to see," said Rory. "It'll be there for a long time. When these kids are off to college, it'll still be there, shining with their little names stenciled on the bottom."

See the mural under the bridge at the intersection of Lincoln Gap Road and South Lincoln Road. Find more of Judah's work at judahjacksonart.com.