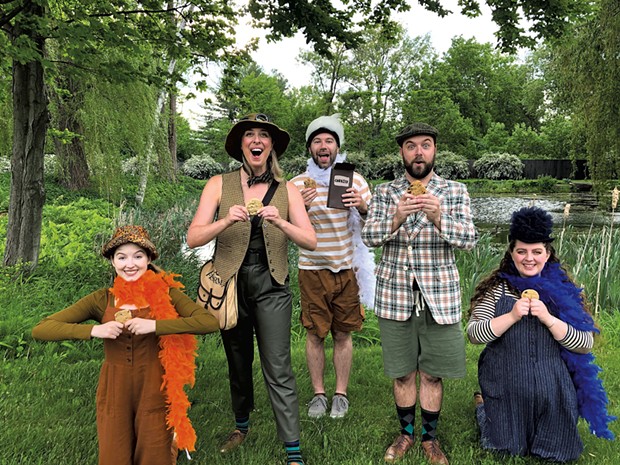 Last March, the cast of Lyric Theatre's production of Matilda was rehearsing up to 16 hours a week for an April run at the Flynn when the pandemic put an abrupt halt to the show.

Nearly 15 months later, the Roald Dahl-inspired musical is still on hold. But the South Burlington-based company is preparing to launch back into live performances with an entirely different show: A Year With Frog and Toad.

Based on the popular stories by Arnold Lobel, the 90-minute musical will be performed entirely outdoors in June at three venues — Shelburne Museum, Williston's Dorothy Alling Memorial Library and Burlington's Fletcher Free Library.

"It's a really smart, witty show that parents will like, as well as kids," said Lyric executive director Erin Evarts.

Frog and Toad is a Theatre for Young Audiences production, which means it is written specifically for children but is performed by adults, said Evarts. It's a new format for Lyric and one she said she hopes to continue going forward.

Performances are free, thanks in part to the Vermont Department of Libraries, and the Children's Literacy Foundation will also donate 100 Frog and Toad books per show.

Jayden Choquette, who's appeared in many Lyric productions over the past nine years, was slated to play Mr. Wormwood in Matilda last spring. Now, he's playing Toad. The return of live performances is "the light at the end of the tunnel," he said. "Theater has always been my biggest passion in life."

In college, Choquette directed a production of A Year With Frog and Toad with child actors, so he was already familiar with, and enamored by, the show.

In the lead-up to the performance, the five-person cast began rehearsing online. Choquette described it as "a very interesting process." It was easy to get a handle on the acting and choreography via the internet, but singing was a different story. The majority of the songs include five-part harmonies, so trying to practice them with an audio lag and microphone issues was hard, he said. The cast eventually transitioned to in-person rehearsals, and Choquette says he's grateful for the opportunity to rehearse in the same space as his fellow actors.

And Evarts is grateful that audiences will soon get to experience the joy of theatergoing again.

With more than a year without live performances, people have missed "the sense of camaraderie and a shared experience," said Evarts. It's something "you can't replicate at home and on a Zoom, and I'm really excited to have people back in that setting."

A Year With Frog and Toad takes place on Saturday, June 12, at Shelburne Museum; Saturday, June 19, at Dorothy Alling Memorial Library and Saturday, June 26, at Fletcher Free Library. A ticketed performance on Friday, June 11, at Isham Family Farm in Williston will benefit both Lyric and Isham's nonprofit First:Earth Summer Series. Audience members will be required to wear masks and sit in pods. Learn more and preregister at lyrictheatrevt.org.