But in middle school, life got more complicated. He wasn't the target of bullying or teasing, he says, rather he became invisible. Childhood friends ignored him. And when he reached out to them, he "got shut down."

The middle school years can be a tough time for anyone, but Drazin had an added challenge: He was born with Treacher Collins syndrome, a rare genetic condition that affects the craniofacial bones and tissues, resulting in physical anomalies including underdeveloped cheekbones, a small jaw and an absence of ear canals. As a child, he endured multiple reconstructive facial surgeries.

Through it all, Drazin, now 29, says he "constantly wrestled with this idea about what it is like to be different." But he didn't let his peers' behavior chart his course. Rather, he took comfort in the people who did see him — like the kids he babysat, who were always excited when he came over. And his parents, who supported him through medical procedures and other obstacles.

After two friendless years at Hanover High School in New Hampshire, Drazin transferred to Sharon Academy, a small private high school he describes as having "a culture of acceptance." With a fresh start, he made friends and was even crowned senior prom king.

In high school and college, he underwent several more surgeries on his jaw and nose that he says made him more comfortable with his appearance. With increased confidence came the understanding that "regardless of how you look, if you present yourself confidently, the world is going to respond positively to that."

Drazin went on to earn a K-6 teaching degree from Goddard College and become a teacher at Bradford Elementary School in central Vermont. He came to believe that schools could spend more time building students' awareness of differences — and start earlier.

So, while teaching in Bradford, he organized annual events where students participated in stations that simulated what it was like to have different disabilities — something he'd seen at a school in Maine when he was a guest speaker there in college. The feedback he received was overwhelmingly positive, setting Drazin on a course to spread his message to more schools.

"Teachers are asked to build community with a diverse population," he explained, but often aren't shown how. Driven by the principle that awareness is the foundation of empathy — the ability to understand and share the feelings of others — he created the nonprofit Changing Perspectives to help students learn about each other's differences. 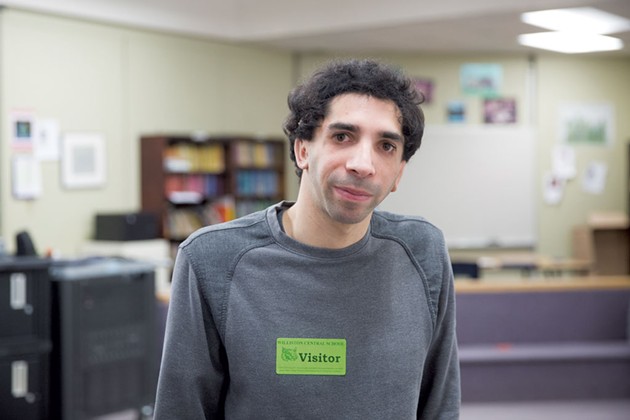 Many Vermont schools are already strengthening their communities through programs like Responsive Classroom, which helps kids develop social-emotional skills; students participate in daily morning meetings and work together to create classroom rules. Drazin's program complements, and builds on, these existing efforts.

Some schools also implement anti-bullying initiatives, but typically they don't start until middle school and often involve a speaker presenting to a big assembly, then leaving. Drazin's curriculum, which was created in collaboration with educational experts including special educators and speech-language pathologists, is geared toward kids in kindergarten through eighth grade and gets students actively involved. They spend about a month learning about various disabilities, listening to guest speakers, participating in simulation stations and, finally, reflecting on what they've learned. Last school year, he worked with a dozen schools — 10 in Vermont and two in New Hampshire — to implement his program.

With Changing Perspectives, which is funded primarily through grants and smaller financial contributions from participating schools, timing is important: It's "proactive, or preventative," meaning it teaches kids to be empathetic before social isolation or bullying becomes a problem. The program gives kids time, and a safe space, to learn and talk openly about differences that are visible, like visual impairment and physical disabilities, and invisible ones, like learning disabilities and social-emotional challenges.

Drazin believes that if a program like this had been around when he was a kid, he might have had an easier time. "I think if other people understood me better," he reflected, "some of that social isolation I experienced wouldn't have happened." 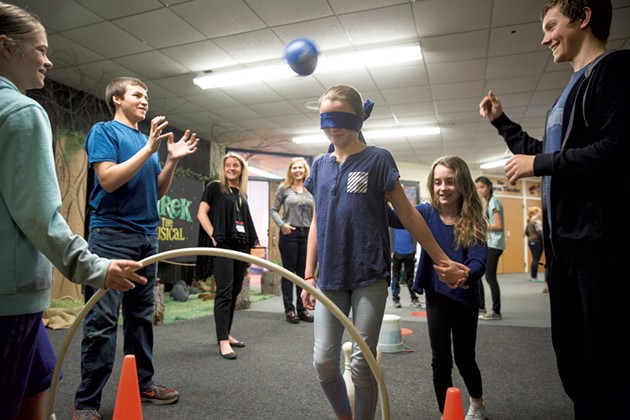 "I believe that building relationships with students and teaching empathy is, at the core, one of the most important things we do as educators," Hunt said.

And there's research to back that up. A November 2015 New York Times article describes a recent study that found adults who received high marks for sharing, cooperating and helping in kindergarten were more likely to graduate from high school on time, earn a college degree and obtain full-time employment. "Social competence outweighed other variables like social class, early academic achievement and family circumstances when it came to predicting outcomes," the piece states.

Changing Perspectives offers educators a menu of lesson plans aligned with Common Core standards, literature units and short online videos to teach kids about those disabilities. For example, students might go on a scavenger hunt to see if their school is accessible for students with disabilities. Or they might watch a clip about what it's like to have attention-deficit/hyperactivity disorder, then create a poster to show what they learned. Each lesson involves a mix of whole group, partner and individual work and emphasizes collaboration and communication.

At Williston Central School, fifth through eighth grade students met in eight different literature groups, reading and discussing works of fiction in which characters had various disabilities. (For some of Drazin's book recommendations, see "Bookworms").

At Folsom Education & Community Center in South Hero, which implemented the Changing Perspectives curriculum school-wide last fall, each multiage team chose a different set of disabilities to learn about based on what they thought would be most relevant and meaningful to their students. Kindergarten through second grade students learned the general concept that everyone is different and had a parent with dyslexia come in as a guest speaker. Third and fourth graders read and discussed Wonder by R.J. Palacio, a work of fiction about a fifth grader with a facial anomaly that was selected as the 2014 Vermont Reads book by the Vermont Humanities Council.

Folsom guidance counselor Mary Ann Fisher introduced the program to her school's staff. She said it was a great way to emphasize the anti-bullying message they're trying to instill in their students, many of whom have challenges like the ones they discussed. Everyone in the school, including the gym and art teachers, helped with the program, and Fisher said many staff members wished it could have lasted longer than six weeks.

Walking in Someone Else's Shoes

In the second part of the Changing Perspectives curriculum — the experience phase — students engage in activities that help them understand what it's like to live with a disability. At Shelburne Community School, where fourth and fifth grade teachers used the Changing Perspectives curriculum, this phase consisted of a Disability Awareness Day last March.

A panel of adult speakers, with differences ranging from visual impairment to Asperger's syndrome, sat at a long table at the front of the gym and talked to students about what their lives were like. Heidi Swevens, who became legally blind when she was in college, explained how special equipment, like a clock that talks out loud and a computer with a magnified screen, helps her function. She told students that she likes being independent, so it's sometimes hard to ask for help. Learning how to use her white cane made her feel empowered, she said, explaining that being blind hasn't stopped her from traveling to Israel and France.

Nicole LeBlanc, who has autism, told the group that when she was a kid, she always wished she were normal. "I've learned there's no such thing as normal," she said. "Disability is just another form of diversity that makes the world unique."

Last spring, students at Williston Central School had a similar panel discussion, which included Molly Thompson, then a freshman at Woodstock High School. Born with Pfeiffer syndrome, a craniofacial condition that caused her bones to develop abnormally, Molly has had more than 34 surgeries and has a tracheotomy tube and hearing aids.

When she was a student at Hartland Elementary School, she started visiting classrooms there to speak to kids about her differences. Drazin approached her last school year to work with Changing Perspectives. In addition to talking to students in Williston and at Hartland, she's visited Bradford Elementary School and plans to do more panels next year.

The program "isn't just about awareness," Molly explained in an email. "It's more about acceptance. It recognizes that we are all people who deserve respect and inclusion, differences and all."

In both Shelburne and Williston, the panel discussions were followed by simulation stations, in which students got a chance to experience how it would feel to have different disabilities. In Williston, middle school students tried out the simulations themselves, then ran the stations for third and fourth graders.

At a station focused on physical disabilities, kids put socks on their hands and tried to string beads and button up a shirt. Sixth grader Amelia Worth said the activity made her think about not taking her fine-motor abilities for granted. "People who have trouble writing, that's daily for them," she said. As part of her Changing Perspectives work, Amelia read a book called Rain Reign about a girl with autism "who's obsessed with prime numbers and homonyms," she explained. She also watched a film called Wretches & Jabberers, about two men who travel the world to raise awareness about autism. Being aware of differences is a good thing, she said, "because we are the people who are going to grow up learning and accepting." 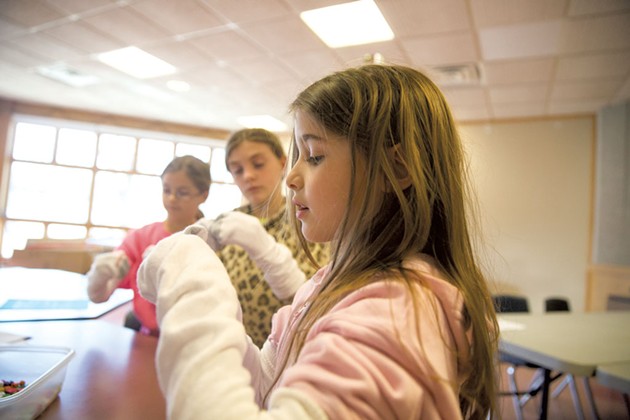 The last phase of Changing Perspectives is all about reflection. Teachers ask kids to articulate how the lessons and activities they experienced changed their perception of people with differences.

After students went through a visual-impairment station at Williston Central School — in which they were led blindfolded through an obstacle course with plastic cones, Hula-Hoops and buckets— teacher Amanda Laberge facilitated a discussion, asking students how the stations changed their outlook.

"It would be really hard if you had no one helping you," said one younger student. "You have to depend on someone your whole life."

The reflection phase also asks students to take it a step further: How will their change in perception lead to a change in behavior?

Williston seventh grader Jagger Lehouiller explained some of the things he's learned to do when he encounters someone who looks or acts differently than others. Welcome them, he said. Be a friend. Don't exclude them. "They're just like us," he added. "They're human beings. They're people, too."

Teacher Kevin Hunt shared some of his students' written reflections.

"I'm more aware about helping out someone who needs help if they look like they come to a fork in the road," wrote one student. "I'm also always happy to become friends with someone if they look lonely."

"People need to know that people are people no matter what they look like or a disability they have," wrote another. "Like Molly said in her presentation, 'Always be kind.'"

"I realize that everyone has their challenges, disability or not," one student wrote.

All children can learn to think this way, Drazin believes, if they're given the opportunity, explicit instructions and strong role models.

"If there are kids who are never empathetic, it's not their fault," he said. "Adults need to be setting kids up for success."

In 2014, Harvard Graduate School of Education's Making Caring Common project released guidelines for how parents can cultivate empathy in their children. We've summarized their five recommendations below. Find the full guidelines here.