Lessons from an Ill-Fated Camping Trip 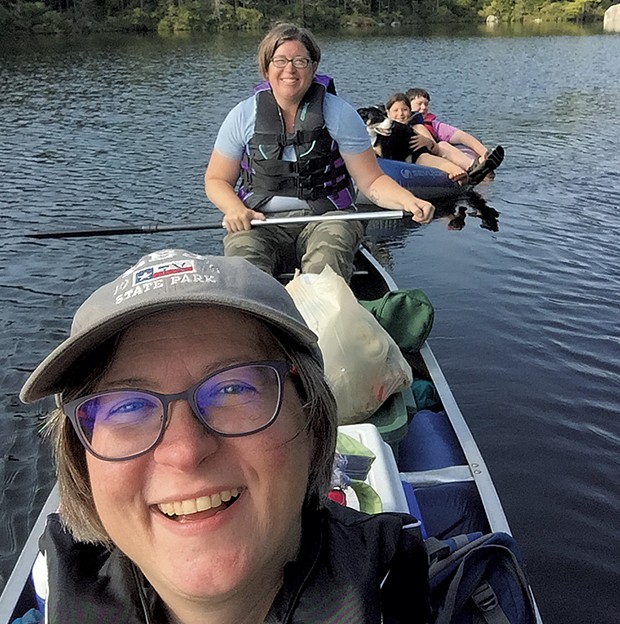 Worried about putting your kids in danger by sending them back to school this fall? Allow me to share a cautionary tale about a time I inadvertently put my own family at risk. The lessons I learned during our calamitous Labor Day camping trip last year are relevant to the COVID-19 crisis, as well.

My wife, Ann-Elise, and I have been camping together for more than 20 years, and we've raised our kids to love getting out into nature as much as we do.

Kettle Pond State Park in Marshfield is our favorite destination. An hour and a half from Winooski, where we live, Kettle Pond feels like a different world. It's home to loons, salamanders, hawks, owls and giant, moss-covered boulders called glacial erratics. The campsites are remote — accessible only by boat or via the pond's 3.1-mile loop trail. There's no running water or cell service.

We camp there at least once a summer and started bringing the kids when they were infants; Graham tented out with us at 6 months, Ivy when she was just 5 weeks old.

There's one major downside to camping at Kettle Pond: It's a ton of work. All of your food, water and supplies need to be packed in and packed back out again, along with your garbage.

We boat everything to and from the site in our canoe, but gathering that stuff and schlepping it there is time-consuming. It's easier now that the kids are old enough to help; last year, Graham was 13 and Ivy was 11.

Unfortunately, on the weekend of our scheduled trip last September, we found out Graham had a football game on Saturday night. That meant we wouldn't get to our site until noontime Sunday, and we'd have to leave Monday morning.

Was a 24-hour overnight at Kettle Pond even worth it? Ann-Elise, who does the bulk of the shopping, packing and prep work, said no. Desperate to save our family tradition, I suggested we make it a bare-bones trip. What if we slept out under the stars and brought only essentials? No tents, no chairs, no stove, no dishes, no pajamas. Just sleeping pads, sleeping bags and food we could eat with our hands.

The weather forecast looked clear, so she agreed. This one time, we thought, we could get away with it.

That brings me to the first lesson: Don't sacrifice safety for convenience.

You want to sleep out under the stars? Fine. But bring a tarp no matter what the weather forecast says. Sure, you might get lucky. But try to imagine what it will feel like if you don't.

Next lesson: Denial will not make a problem disappear.

We had a perfect Sunday at Kettle Pond. We went swimming, built a fire and read books. We didn't bring cards, but we played euchre using a deck Ivy made from pieces of bark. We went to sleep snug in our sleeping bags after listening to the loons.

But around midnight, I woke up to raindrops on my cheeks. The kids had bedded down beneath the branches of a hemlock tree, but Ann-Elise and I were out in the open. I could hear intermittent drops hitting the plastic surface of our air mattress.

At that point, we could have gotten up and gathered some things — our books, our towels, the matches — to try to keep them as dry as possible.

Instead, we closed our eyes and willed the rain to stop. "It's not supposed to rain," Ann-Elise groaned. "It's just drizzling," I replied. "It'll stop soon."

But it only rained harder. Within an hour, I was contorting my body to avoid the water pooling inside my sleeping bag.

When I started to shiver, I knew I needed to get up and get moving. Being wet was uncomfortable, but being wet and cold on a brisk fall night without shelter nearby? That, it started to occur to me, was dangerous.

This is when I came to terms with the next lesson: Nature does not care about you.

Your fear, guilt, shame and worry don't matter to a rainstorm, or a virus. Nature won't take pity on you and let you off easy.

That hit home for me when I unzipped my sleeping bag and stood up to survey our campsite. I pulled on my boots and water sloshed out. We hadn't been careful about stowing things before we went to sleep, and now our stuff was scattered everywhere — and soaking wet.

I thought about paddling back to our car and returning to pack up in the morning. But one look at the water disabused me of that notion. Wind and rain roiled the surface. It would be very choppy and hard to see rocks and the shore in the dark.

We couldn't walk out, either. Our "bare-bones" packing list had not included flashlights or headlamps. We figured we wouldn't need them as long as we had our phones. But we couldn't use our phones in the rain!

By now the kids were wet, too. Ivy got up and stood with me and Ann-Elise beneath the dripping hemlock branches as we considered our options. Graham was somehow still snoring quietly, so we let him sleep.

I realized that if it got much colder, we would all get hypothermia. We couldn't leave safely, and it would be difficult to call for help. Our nearest neighbors were strangers sleeping a quarter mile away. Ann-Elise and I didn't want to alarm Ivy, but we could see that we were in serious trouble.

Not only did I feel like an idiot, now I was scared.

Next lesson: When you're at an impasse, improvise.

Around 2 a.m., as it started to rain harder, I looked around to see if there were something we might be able to use as a shelter. And then it hit me — the air mattress!

Ivy, Ann-Elise and I deflated it slightly and wedged it between some hemlock branches. The three of us huddled beneath it, with our damp dog, Ginger, curled at our feet. We must have looked pathetic, but at least we weren't getting any wetter.

Next lesson: Intense situations can give you a new appreciation for each other.

I'm reminded of this "silver lining" constantly during the pandemic; Ann-Elise and I agree that we both felt it keenly that night at Kettle Pond, as well.

Once we were under the mattress, Ann-Elise was delighted to see me pull out a dry red fleece I'd hidden beneath my sodden hoodie and T-shirt. I'd been using it as a pillow, and when the rain started I'd tucked it under my shirt to shield it.

"That is so smart!" Ann-Elise exclaimed. "I'm so glad you brought that!"

I have poor circulation and am always cold, so my dropping body temp had been weighing on her mind.

As I started to put it on, I asked her to hold my smartphone, which I'd stowed in the waistband of my jeans. "Do you want to put your phone with mine?" she asked. "It's in a Ziploc in my bra."

"Oh, my God, you have a plastic bag!" I cried, relieved that I wouldn't have to worry about my phone anymore.

When Graham finally emerged from his sleeping bag with bare feet, we insisted he put on socks and shoes, even though they were wet, to conserve his body heat. He didn't resist, though he regularly defies our demands to put on warm clothes in winter. He couldn't quite manage on his own, though, and I had to bend down to help him while he held on to Ivy and Ann-Elise for balance.

When I asked her about it later, Ivy said: "I remember when Graham was so cold he couldn't put his socks on. That was a little scary, because he's never cold."

Through this whole ordeal, neither of the kids whined or cried. Nobody bickered or complained. We all just worked together to get through it. That part was pretty amazing.

Recalling hard times you've made it through before is an excellent survival tactic, whether you're stuck quarantining at home or huddled under an air mattress in the dark during a storm.

We warmed up a little under our makeshift shelter and decided we could last there until the rain stopped or the sun came up. To keep us all awake and alert, Ann-Elise and I started telling stories.

I recounted a trip I took for a backpacking class in college: We hiked up the highest mountain in Virginia in November, and our novice group, unprepared for the cold, nearly froze. We were really hungry, too, after the hapless instructor spilled our entire pot of pasta in the dirt.

Ann-Elise told us about a girl from her high school bike touring club who refused to train for their spring break trip to New Mexico. "She didn't realize we'd be biking over mountains," Ann-Elise recalled. The rest of the group was forced to help carry her bags and had to shorten the route to accommodate her. The moral of the story? Don't be that girl.

Ivy now reports that her favorite story was one Ann-Elise told about an ugly but heavy-duty poncho her dad bought her before a hiking trip. "Everyone laughed at her," remembers Ivy. "But then she was the only one who was dry when it rained."

The last lesson: What doesn't kill you will make a great story.

The rain didn't let up, but around 4:30 a.m. the dark gray sky turned a little bit lighter, and we prepared to depart. Ann-Elise and Graham dumped the water out of the canoe while Ivy and I collected our belongings. By 5:15, we were ready to go.

We thought the four of us, plus Ginger, could fit in the boat, but we hadn't counted on the weight of our water-logged gear. Everything was so much heavier.

As badly as I wanted to paddle away, I had a vision of us capsizing and realized how much worse that would be. So Ivy, Ginger and I hiked out in the dim light instead, while Ann-Elise and Graham took the canoe.

What Graham remembers best about the paddle back is dipping his hands in the water. The day before, we'd all thought the water was freezing. But after a night of shivering in the rain, "It was like a sauna," he said. "That's how cold we were."

The other thing Graham remembers? "It stopped raining as soon as Mom and I pulled up at the dock."

They beat Ivy and me there, but we caught up with them in time to help carry a few things back to the car. Once the trunk was full and the boat was secured to the roof, we closed the doors, started the engine and blasted the heat.

Usually when we get home, we unpack right away. This time, we left everything in the car.

After we all took hot showers, we laid around the living room together, grateful to be warm, dry and safe. We've spent a lot of time at home since then, especially over the past few months, and I've tried to hang on to those feelings of contentment.

This is one of those stories we'll tell and retell for years; Ivy already wrote an essay about it for school. No doubt our grandchildren will hear about it, too. Luckily, it ended well.

Fingers crossed that we'll be able to say the same about this school year.