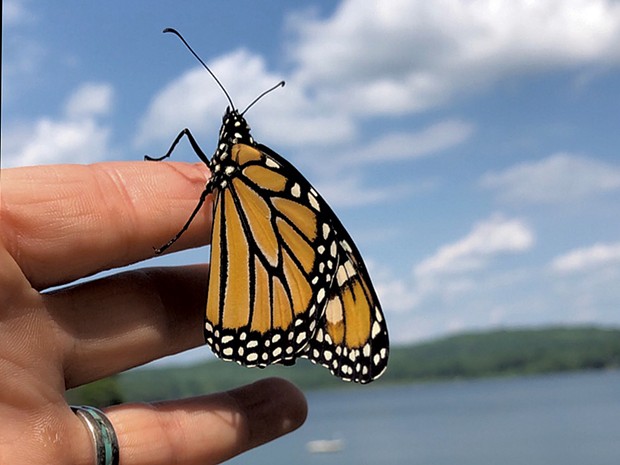 "How many more months until my birthday?"

That's my 7-year-old daughter Ruby's favorite question these days. I quickly do the math and give her an approximate answer.

My response is always met with a whine, followed by her huffing out of the room. I try to reassure her that, even though her birthday is far away, there will be many fun times and adventures between now and then. I encourage her to savor each day. Such wise advice. Too bad I don't adhere to it.

Back in March, when quarantine began and everything seemed like it was ending, I found myself wishing away the days. If I could just make it to the end of the school year and summertime, things would be better, I thought. I tried sending telepathic thoughts to Mother Nature. Please stop snowing, I begged.

During this time, I kept seeing the meme that stated: "Nature isn't cancelled." Whoever coined the phrase was right, but it made me bristle. Was that person pontificating about this from a sunny California trailhead? Did they know that there were still stubborn clumps of snow hiding under the branches of our cedar trees?

Regardless, I dutifully tried to encourage "spring" walks with Ruby and her 12-year-old brother Henry, hoping we could focus on the present. I desperately tried to weave science lessons into our mundane strolls.

"Hey kids, look! Those daffodils are sprouting! Why are those flowers always the first to bloom in the spring?" I asked them. My tween's typical response: "I don't care, Mom."

After the rains, Ruby, the more eager and inquisitive of my children, and I played worm rescue. We'd run out to the driveway and pluck the swollen worms and gently bury them into our dormant raised garden beds. I wanted so badly to "embrace the suck," even though I, too, was counting down the days until something special and better came along. I kept reassuring myself that despite this trying time of gray skies, social isolation, homeschooling and weird worm shenanigans, summer would eventually come.

In fact, summer was already on its way — thousands of miles to our south. Over the last three years, my children and I have come to associate the peak of summer with finding our first monarch butterfly. You see, monarchs cannot live in cold-weather climates, so they winter in Mexico. As the warm weather starts to mercifully spread to the Northeast, the monarchs begin their migration to Vermont. We usually see our first monarch in early July.

Within days, our garden of milkweed plants are dotted with monarch eggs. They are tiny and white and sort of roundish yet pointy-ish with small ridges. Very scientific, right? Finding that first egg is how we know summer is in full force.

We love finding the eggs because that begins our annual adventure of hatching them, raising caterpillars, then finally releasing the butterflies back into nature. Last year we released more than 50 monarch butterflies during the course of the summer and fall.

Nurturing monarchs is pretty easy. Since butterflies are insects, they change forms throughout their life cycle, a process called metamorphosis. If you've ever read The Very Hungry Caterpillar, by Eric Carle, you know it all starts with an egg, which you can find on the underside of a milkweed leaf. This little egg will gestate for about three to four days. Then, pop! Out comes a caterpillar. When it first hatches, it's just a few millimeters long.

Then, as Carle's picture book explains, the caterpillar gets super hungry and eats everything it can until it's really fat. In the case of the monarch caterpillar, it will eat milkweed almost constantly for about 10 to 14 days.

After the caterpillar grows to about one inch in length — or "the teenager phase," as I like to call it — it will stop eating you out of house and home and climb up to a flat surface. You can tell the caterpillar is beginning to enter into its chrysalis, or pupa, phase when it hangs in a J shape and ignores everything you say and do.

If you time your observations right, you might be lucky enough to see it wiggle and shed its caterpillar skin as it becomes a bright green chrysalis. After another 10 to 14 days, the chrysalis slowly cracks open, and a monarch butterfly emerges. Now that it's become a young adult, you can release it out into the world.

My kids and I were already three creemees into summer when I found our first egg of the season in our backyard. A sense of relief washed over me. Was it possible that our summer might have a recognizable routine? How could something so simple as an egg bring out such emotion?

Our normal summer plans had been ambushed by COVID-19. No camps. No sleepovers. Masks anytime we left the house. I wanted to reassure my kids that we'd have a good summer despite these unprecedented times. But how do you maintain a sense of calm when everything around you is unstable?

My children don't know what school will be like next year or even what's going to happen next week. But they do know that when Mom finds a monarch egg, she will put it in a container and let it grow. They know that, just like last year, we will feed the caterpillars daily and laugh at how much poop they produce. They know that, when we travel to our family's lake house, Mom will pack up the car and bring the caterpillars on the road trip, too. Just like years past, the kids will argue over who gets to release the butterfly, and Ruby will squirm and shriek as the insect's newly formed legs cling to her tiny fingers.

My wish for my children is that they will see that, despite the chaos, these monarchs are still doing their thing. That, though so much right now is unpredictable, nurturing the life cycle of something as simple as a butterfly is still a reliable adventure.

I want them to embrace the feeling of being connected amid the unfamiliar, and to understand that if we tune out during this trying time, we might miss something special.

How to Raise Monarchs

Items you will need: