Learning How to Fly Fish 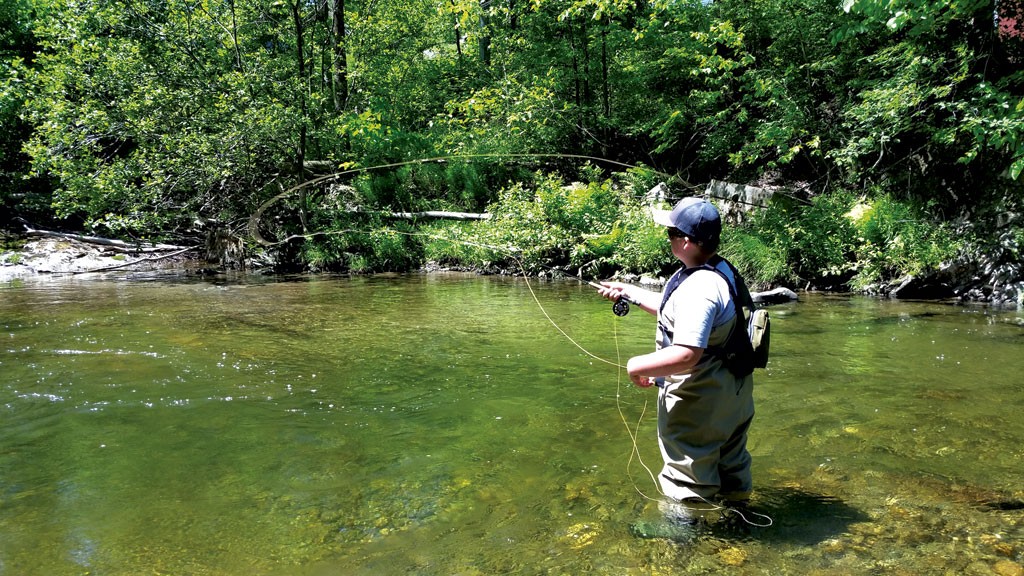 The difference between fly fishing and reel fishing isn't just about gear or technique; it's about philosophy. That much becomes clear after talking to 14-year-old Zach Favreau. "With fly fishing, you're a lot closer to the fish and you can almost see it from how they see it," he told me. "Instead of just sitting on a shore, you're in the stream, in the fish's environment."

Zach, who lives in Georgia, Vt., agreed to spend a sunny Saturday morning in Jeffersonville teaching me about the sport. He learned to fly fish four years ago at the Green Mountain Fly Fishing Camp, a weeklong summer program for kids ages 11 to 15 in Groton State Forest. 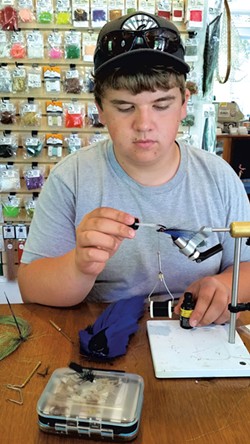 Camp founder and director Chris Lynch, the manager of Green Mountain Troutfitters in Jeffersonville, barely advertises. Yet all three of his summer sessions are usually booked up by January. The camp attracts kids from all over the country, and almost all first-time campers return for another year.

These kids are passionate about the sport, sometimes keeping at it for 15 hours a day with only small breaks for meals, says Lynch. Many campers voluntarily get up at 6 a.m. to fish before breakfast. They end each day at 9 p.m. after fishing from rowboats on Noyes Pond, right outside their lodge.

During breaks from fishing, campers learn how to tie their own flies. No actual insects are involved; "flies" are made out of a mix of natural and synthetic materials. The idea is to create something flashy that will make a fish believe it is catching a real fly.

The key to tying a successful fly is to create something that looks like it came from the natural world. In the backroom of Green Mountain Troutfitters, Zach used a fly-tying vice, thread, beads and several specialized tools to show me how to tie a "woolly bugger," a black-and-green fly that resembles fish food.

The woolly bugger is particularly versatile, Lynch explained, because "it could be a leech, it could be a bait fish, or just something that gets in the fish's face and makes him angry and want to strike." After about 10 minutes of working on it, Zach held up a tiny, delicate piece of art that he might very well sacrifice to the river right after he casts it.

"It's better not to get too attached," Lynch explained.

Choosing which fly to use is just as important as tying the fly. Successful fly fishermen and -women develop a sophisticated understanding of the river ecosystem. In other words, in order to trick a fish into biting their fly, they need to think like a fish. Zach says he and fellow campers have to learn what bugs are hatching, how the temperature and volume of the water affect the fish's behavior and where fish are most likely to swim and feed.

After putting on hip waders and boots, Zach and I walked down to the Brewster River. He waded up to his waist into the center of the stream and began casting in a slow deliberate circle, showing me the spots where the trout would most likely be. "You see up there?" he gestured to the darker, shallower section of the water underneath an overhanging rock. "That's where you want to put your bug imitators."

As I stood half-submerged next to Zach, feeling the late spring sun on my back and listening to the water rush past me, I started to understand why this sport might elicit such intense dedication.

We didn't catch anything, but that didn't bother Zach. Hanging out in the river on a beautiful summer day seemed to be its own reward.

"The fish are just a bonus," Lynch explained when we peeled off our wet boots inside the shop. "A big part of it is just for the places that it takes us."