Leaders of the Pack

Counselors set the tone for your kid's summer-camp experience 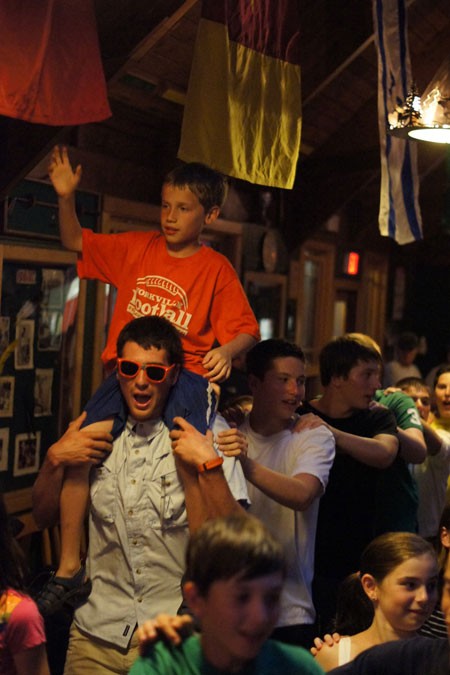 Babysitters and childcare providers prepare parents for separation anxiety, but sleepaway camp is the real deal. You drop your child off and trust that he or she will swim in a lake, climb trees, gain a sense of independence and return safely to you at the end of the summer.

Who precisely is leading your kid through these life-changing adventures? It's probably not the camp director, who may have answered your preregistration questions about camp life, food and accommodations. The camp's medical practitioners concern themselves with health and safety policies.

Counselors ultimately shape your child's experience at camp. If you want to get a feel for whether a place is a good fit for your kid, find out as much as you can about the people who will be leading, disciplining and inspiring him or her there.

In addition to state certification, most camps pursue a voluntary accreditation with the American Camp Association, which does require counselors to pass background checks. The ACA works with experts from organizations including the American Academy of Pediatrics and the American Red Cross to help determine how camps should operate. It has age and experience requirements for counselors overseeing high-risk activities such as swimming, sailing, archery or high-ropes courses.

The ACA also advises parents on how to choose camps. How do you decide whether counselors can walk the line between fun and safety? "Ask questions," recommends Lucy Jackson Norvell, director of public information with the New England chapter of the ACA. She suggests asking the following questions:

How many counselors return each year?

At many long-established camps, the answer to the question above is "most of them." That's good news, since happy counselors make for happy campers.

Many counselors actually start out as campers. At Camp Keewaydin, an adventure camp in Salisbury founded in 1910, 60 percent of the staff were campers themselves. Last year, 10 of them embarked on a 70-day, pre-camp canoe trip to raise money for the camp's foundation.

"It's a pretty happy lifestyle," admits Keewaydin staffer Cameron Nevin, a second-generation Keewaydin alum. He says the decision to become a counselor was a "no-brainer."

"I was given a chance to work with kids and be outside 24/7 doing something I love," he says. "Some of my closest friends now were campers who I hiked around with as a kid at camp."

A philosophy major and studio-art minor at the University of Vermont, Nevin says it's a joke around camp that some people become teachers so they can work summers at Keewaydin. His father was a camper-turned-staffer who did just that.

At Brown Ledge Camp in Colchester, about 70 percent of the 80-person staff returns each year. The camp's longest-serving employees — a couple who spent 50 years at Brown Ledge — recently retired, but the staff still boasts considerable longevity, even if the average age of a counselor is a ripe old 26 or 27. Most of the camps in this story report that their counselors are between 18 and 24.

Age is an important consideration, notes Norvell. Will teenagers be transporting your children by car to excursions that are off camp property? It's worth asking, she says.

Sarah Disney, director at the Adirondacks-based Pok-O-MacCready camp and the mother of three adult daughters, agrees. "As a parent, I want to know how old cabin counselors are," she says. "I'm fine with having younger counselors assist, but I want more mature staffers to take the lead."

What kind of training do counselors receive?

At Brown Ledge, an all-girls camp that specializes in drama, counselors are generally hired for one specific activity: swimming, riding, arts and crafts. Codirector Bill Neilsen says that helps to focus a counselor's attention — and also motivates him or her to make that activity fun and appealing. Brown Ledge girls are mostly free to create their own schedules. That freedom encourages autonomy and good decision making, traits the camp wants to develop in campers and counselors alike.

"We don't micromanage our staff," says Neilsen, who has codirected Brown Ledge with his wife, Kathy, since 1983. "We do set parameters, but our counselors have a lot of latitude in how they choose to meet those parameters."

Before a counselor starts working with kids, he or she undergoes at least a week of training. This time is dedicated to learning specific on-the-job skills, such as getting to know the horses in the riding program, organizing the archery equipment, or checking to be sure all of the props and costumes are in order for the popular theater-arts program. Educating new counselors on the camp culture is the other main priority.

"Camps traditionally have a 'style' for how they respond to everything, from homesick kids to best practices to minimize injury," says Norvell of ACA.

That's less of an issue with perennial staff. "Since the large majority of our counselors are returning, we already have a culture established, and new people tend to get sucked right into it," says Neilsen. "It's a Noah's ark of sorts — a broad range of people, and a good number from abroad — but we work closely with new people to make sure they're fully qualified and a good fit."

What qualities do camps seek in their counselors?

At Pok-O-MacCready, where newer counselors are under the guidance of a more experienced "section head" or lead counselor, Disney looks for applicants who approach activities with enthusiasm, whether it's swimming or mucking out a stall in the barn.

"Not everyone needs to be super gregarious to be a counselor — we need some quieter people to balance things out, too — but the most important thing is to enjoy it," Disney says. "If you love what you're doing, then the kids will, too."

That's especially important in emergencies. A fully engaged and upbeat counselor can make the best of a bad situation, turning a group of scared campers waiting out a storm into kids having an impromptu pajama party accompanied by whistling wind outside. It all depends on how inventive — and enterprising — a counselor can be.

But most of all, camp directors know it's essential to find staffers who will put safety first.

"Parents are dropping their kids off and expecting them to, first of all, arrive home safe and, second, to have a fun summer," says Scott McIntyre, a former camper and counselor at Pok-O-MacCready, where he is the current director of finance. "If a child has a great summer but has a mishap or gets lost, they're probably not going to come back."

How do the counselors help kids take risks?

One of the great things about camp is that it gives kids the opportunity to challenge their physical, social and emotional boundaries.

At Keewaydin, Nevin teaches white-water kayaking, a sport that requires him to have special training and Wilderness First Aid, CPR and Small Craft Safety certification.

"Risks are everywhere because the river can be a dangerous place, so I make sure a kid is fully confident in Paddling Class II before moving up to the next class," he says.

At Brown Ledge, the "learn-by-doing" culture encourages campers to try new activities and challenge themselves. Maybe the biggest risk there is getting up in front of hundreds of peers at a weekly open-stage event, during which campers are invited to present any form of performance art they choose.

"A good staff member will help a child work progressively toward a goal," says Norvell, whether it's performing onstage, tackling the high-ropes course or learning to sail.

She adds, "A great camp counselor will help a child become as independent as possible while still being entirely safe."