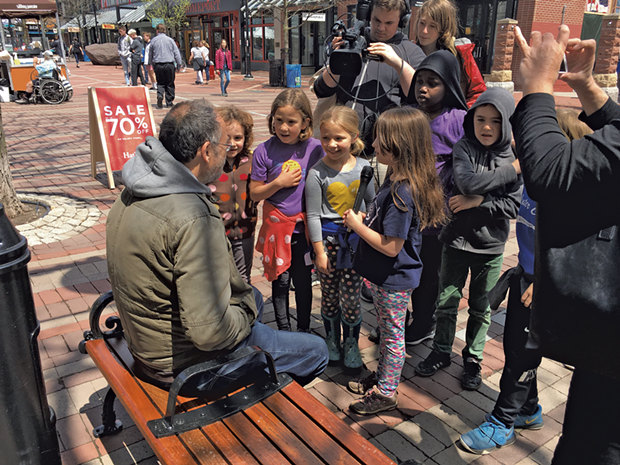 In 2014, second grade teacher George Leal launched a class newspaper at the Integrated Arts Academy, an arts magnet school in the Old North End of Burlington. That year, the 7- and 8-year-old staffers decided to use their lunch break to investigate an attempted robbery at a neighborhood store. Leal initially pushed back on the idea, but after his students "started quoting back all my First Amendment speeches," Leal said, he allowed them to interview the owner of the store. That undertaking led to a classroom discussion about the role of newspapers and what people have a right to know.

The following school year, the new batch of second graders thought that the newspaper was an institution, and asked to be part of it. It's been published every year since. This year, Leal's students are publishing the sixth volume of the Weekly Leal.

Leal estimates that the students spend 15 hours a week on the paper — writing and editing in their free time, or when they finish their class work early. The team of around 10 students produces the paper themselves. They take "press passes"— photo ID cards hung around their necks — to the front office to find story ideas, then type stories up, edit them and lay them out. The kids print a master copy on the library printer, make copies in the office, then pass them out at lunch.

"We've tried doing an online version as well, and they've never been that interested in that," Leal said. "They like the physical It-comes-out-on-Friday-we-hand-it-to-people version."

In class, Leal has continued to have conversations with his students about concepts like fake news, the scope of their news coverage and the importance of being informed.

Several school staff members are retiring or leaving at the end of the year, and the students wanted to write about it. "And the teachers didn't necessarily want that information out there," Leal said, "so that's a conversation that's had to be had a few times."

While the class was at recess, Kids VT spoke with some of the writers and editors of the Weekly Leal.

Kids VT: What is your job at the Weekly Leal?

Liban: I save it, and I print it, and I pass it out to everybody in school.

Marlee: I do what is called the "Marlee's Critter Corner." I write about animals because I really like them, and I write fun facts about them. And I also like to tell people about them so that they like them more because a lot of animals are endangered.

KVT: What do you like about the Weekly Leal?

Adrian: Probably that I get to show articles to the whole school.

Mila: My favorite part probably is writing articles... It's a hard job, but it's also fun, and hard at the same time.

Josie: It's fun to see it on the computer with all the different fonts and stuff.

KVT: What are some of the challenges of working at a newspaper?

Josie: To make the article longer.

Adrian: I don't always find articles... Sometimes I go up to the principal and ask for some news, but not always I get some.

Marlee: Well, I kind of always have one story about an animal every week, like, one time there was this squirrel who got caught in the trash can outside. He jumped into the trash can, and the squirrel couldn't get out, so our teacher had to grab him out. It's a good thing he didn't bite.

KVT: What have you learned?

Adrian: That writing is sometimes a little bit hard.

Josie: How to write a newspaper? (laughs)