Investigating Streams and Ponds with Kids 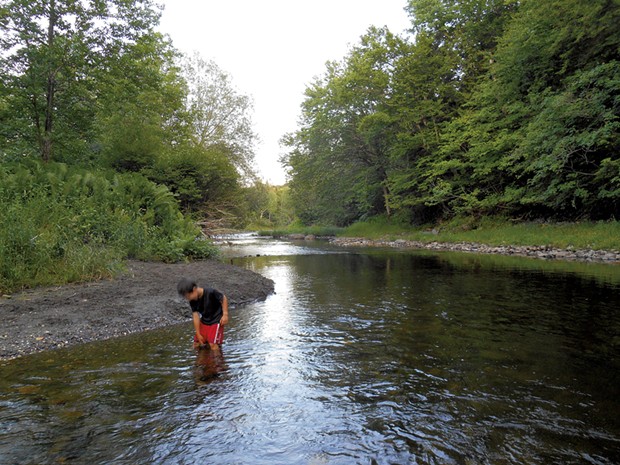 After a long, cold spring of staying home, the sun's warmth feels glorious these days. I've been wondering if the trails are going to feel especially crowded this summer. I am thinking that getting out on — or in — the water might be the way to go.

I met, virtually, with Saint Michael's College biologist Declan McCabe to ask him for advice about how to inject some ecological thinking into time on the water. He offered a wealth of suggestions, all centering on one seemingly simple question: What do fish eat?

Worms, right? Well, if you paused to consider it for a moment, you wouldn't be very successful trying to find worms for bait in streams or rivers, so no, not usually. If you collect water samples, you'll find creatures that fish actually eat: aquatic invertebrates.

For outings with kids, McCabe favors going to small streams that are about ankle-deep, because it's easy and safe to get to the water. He encourages exploring the water using items that you are likely to have lying around the house.

Start by filling a bucket with stream water. Pull out some rocks from the bottom of the stream and put them in the bucket. Any kind of lump on the rock is likely a living organism. Tweezers are useful for picking things off rocks, and a magnifying glass is nice to have if you find something interesting.

To find bigger organisms, get a high-quality net at a pet store. Take a "kick sample," which, said McCabe, "sounds science-y, but it just entails kicking the bottom of the stream to disturb things." Stomp around or dig in the sediment with your foot, a little upstream, and organisms will flow into your net.

Another "cool piece of science equipment," said McCabe, is an ice cube tray: "Fill it with stream water, put a little critter in each hole and make a bug zoo. Keep it in the shade for half an hour or so, then let everybody go."

"If you have competitive kids, you can get two ice cube trays and see who wins," he added.

Here's McCabe's quick guide to what you're likely to find:

He's quick to point out that it doesn't really matter whether you know each creature's name. You can tell a lot about the water you're in just by counting how many organisms you find. If there are many different types of aquatic invertebrates, it is probably a clean stream. If you only find a few types, it probably has more sediment, more pollution and/or less oxygen. 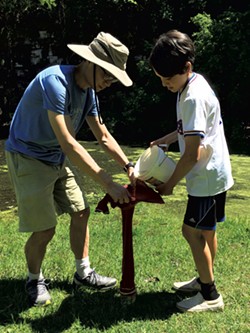 Ponds are harder to get in and out of, and deeper, but they host a different suite of aquatic invertebrates. If you have a dock, you can sample safely from there. Use a store-bought net or make your own plankton net: Cut one foot out of a pair of tights or pantyhose, and secure a plastic peanut butter jar (or something similar) to the resulting hole with rubber bands. Hold the waist open with a coat hanger. Pour a bucket of water through your homemade net. The tights will act as a sieve, and you'll likely find water fleas. You might also see diving beetles, giant water bugs or water mites, which McCabe likened to "red Sonic hedgehogs."

McCabe noted that giant water bugs are good ones to celebrate in honor of Father's Day. In one species found in Vermont, the male carries eggs on its back. In another species, the male takes care of the eggs above the water line by protecting them from predators and watering them to keep them moist.

In addition to microorganisms, fish rely on a rather surprising food source, indirectly. The base of the food web in New England streams (and some ponds) is actually fallen leaves. In winter, aquatic invertebrates fatten up on these leaves. You can read more about this and find surprising answers to other nature questions in a wonderful Northern Woodlands column called "The Outside Story."

When you're on the water this summer — whether you're looking down from above in a boat or doing kick samples in muck boots — pause to consider the tiny invertebrates (and the leaves they eat) that make it all happen.

As you're heading out to sample your local waters, consider adding a literary element with perhaps the only book of poetry about aquatic macroinvertebrates out there: the Caldecott Honor Book Song of the Water Boatman and Other Pond Poems, written by Joyce Sidman and illustrated by Beckie Prange.