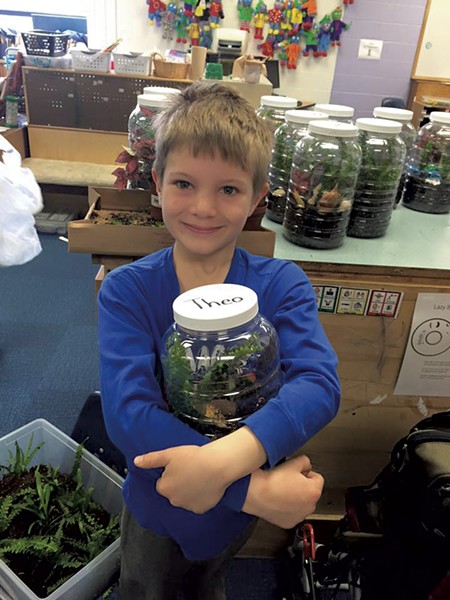 In middle school, I had an art teacher named Pecky Kaupelis. Her classroom was as unconventional as her name.

To enter it, kids had to pass under a sheet of shiny silver streamers, hung from the doorway to create a waterfall effect. There was a heated pole running up the center of the room (most likely a covered water or heat pipe), that Mrs. Kaupelis had wrapped in multicolored streamers and yarn. She called it the "hugging pole" and told students that if they felt sad or needed positive energy, they could wrap their arms around it. That proposition was a hard sell for a bunch of jaded middle schoolers, and no doubt inspired quite a few eye rolls. But there was something about Mrs. Kaupelis' sweet and fairylike demeanor — and the fact that she'd taken time to create a hugging pole — that felt affirming and soothing. Her colorful, magical classroom, with its aroma of clay and perfume, was a respite from the sometimes unkind and icy world of middle school.

What Mrs. Kaupelis knew almost three decades ago was that it's not just what kids are learning that's important, but also where they're learning it. In this month's issue, we feature six classroom and school spaces that foster creativity, independence and student choice. Check out what educators have to say about their spectacular spaces — from a rustic classroom in the woods to a maker space filled with 21st-century tools.

September also signals the start of youth football season in Vermont. In early 2017, the Vermont Principals' Association mandated that, starting this academic year, all school-sponsored football programs up through eighth grade must switch from tackle to padded-flag football. In "Heads in the Game," Ken Picard outlines the reasons behind this decision, and talk with the independent Northern Vermont Youth Football League, which still plays tackle football at the middle school level.

There's lots more to love in this issue, including articles on how to make art supplies out of natural materials, where to go to find huge, old trees and how two grandparents built an impressive camper-style playhouse. Also, for the last time, find the scorecard for our Good Citizen Challenge in the center of this issue. The deadline to enter is October 9, so there's still time to complete the Challenge!

Here's to a wonderful school year, full of learning, fun and inspiration!