Ask most Americans what goulash is, and they'll probably say tomato sauce with lots of meat, mixed with macaroni noodles. With origins in medieval Hungary, there are actually many variations of this hearty dish. According to my internet research, it began as a shepherd's stew and the now-signature Hungarian paprika was added to the recipe in the 16th century. It can be made with beef, veal, lamb or pork, or a mixture of meats. 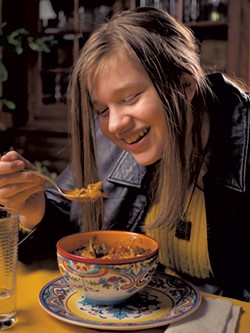 For my take on the dish, I made a brothy stew with bell peppers, carrots and onions, served over egg noodles.

For years, my husband and I have dreamt about a family trip to Prague — where we honeymooned — then a jaunt over to Budapest to sample all of the culinary treats the region has to offer. For now, we'll just travel with our taste buds.