How do you keep your kids busy — and your family sane — in the winter? 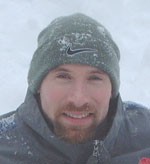 I have two extremely active boys, so wintertime gets to be tough because the days are so short and you're cooped up inside. If you live in Vermont, you kind of have to enjoy the outdoors, so we try to get outside as much as possible. During the weekends, we do a lot of skiing and snowboarding. We all go up as a family. We also like to go snowshoeing and hiking, getting out in the woods and enjoying the weather. We're fortunate to have some fields where we live, even though we're in a development area. The hardest part I find is coming up with something to do with the boys during the week. You work all day and get home, and they want to go out and do something. Last winter, I told them that if they came outside and helped me clear snow, I'd try to snow-blow and shovel as much as I could into one spot so we could make a massive snow fort. This winter we're going to make an ice rink. That's the goal. We try to come up with a plan for one long-term winter project to keep them occupied.

I don't find that my daughter needs a lot of help to keep busy in winter. I'm the one who needs help keeping busy and staying sane. Because my daughter loves downhill skiing and I don't — I love splitting wood and cross-country skiing — my wife, who likes both downhill and cross-country, will take Ella skiing. We sort of divide and conquer there. One thing that seems to unite us is ice-skating. There are so many unusual places in the area where you can ice skate, little bays and ponds. I have a bunch of street hockey sticks and some pucks, and it's fun to find a piece of ice — we call it wild ice hunting — and put a couple of boots down for goals, call a bunch of people, and play. When our daughter was younger, we had to come up with more things to do. I remember just simple things like sidewalk sledding — running down the sidewalk with a sled, with the dog chasing us. We could do that for hours.

I grew up as a kid skiing every weekend, so I've brought that tradition back to my kids. The Fifth Grade Passport is a phenomenal thing that the state of Vermont does. For a one-time fee of $10, it's the best deal going. It allows a kid to ski just about every ski area in the state. The other thing we've done, which I think is a huge home run because it's convenient, is our neighborhood built a nice ice rink on the common land. A lot of people have backyard rinks, but that's sometimes like maple sugaring: You do it once, and you never want to do it again. We have eight to 10 families in our neighborhood to help maintain the rink. Our kids will go out and skate all night long and invite their friends. We light it at night by plugging in to the neighbors' house (we pay them for the electricity). We build fires out there. And there's always the Burlington Country Club sliding hill. Indoors, there's Patriots football. When they're on, we're watching them. Or if we're skiing, we record it. My two sons love watching the Bruins, and we're big UVM hockey-goers. It's another way to beat the winter blues.

Back when they were younger, we lived up in Georgia, and we had a big yard up there. We'd go outside with them, and we'd build snow caves and have snowball fights. We had a dangerous little hill at the back of the house that we'd go sledding down. When we were cooped up inside, we had lots of indoor stuff to do. Luckily, the whole family was movie buffs, so we'd watch movies together and make hot chocolate, chocolate chip cookies or brownies. We'd play video games, and board games. We loved board games. We'd taken the kids to Disney World, so we'd play the Trivial Pursuit Disney Edition. We'd play Sorry. We didn't play Monopoly because it took too long, and they'd fight over it. We gave that up early on. They liked Clue — the whole challenge of figuring it out — and, of course, checkers. Our oldest son, Keith, was a big chess fan, but nobody could beat him, so we didn't play that.