How Dads Can Model Healthy Masculinity 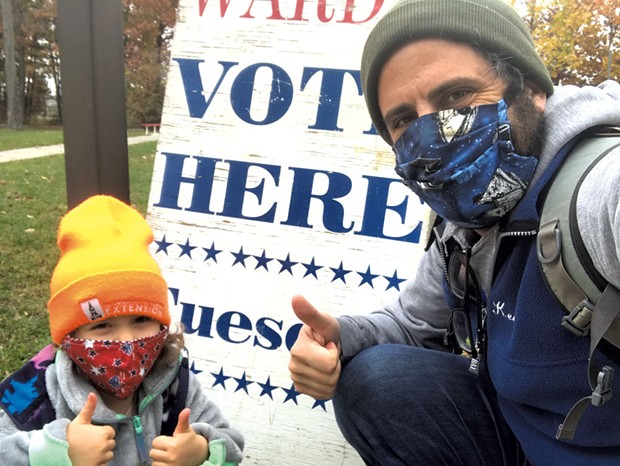 As soon as my eyes opened on the morning of Wednesday, November 4, I grabbed my phone to check the results of the presidential election. I had anxiously gone to bed the night before, hoping to wake up and see the aftermath of the potential "blue wave" political analysts had been discussing for months.

I did not want a repeat of 2016. I did not want to look into my daughters' eyes, knowing that once again our nation had elected a man to be president who describes women in vulgar terms..

I stared at my phone blankly. The wave hadn't come. Instead, the presidential election was still too close to call. Nearing the end of a presidential term that was characterized by bullying, racism, sexism, homophobia, transphobia, white supremacy and anti-science, nearly half of the nation's registered voters still wanted this man to lead our country. Somewhere near 75 million people, to be exact.

As startling as the results were, I also wasn't entirely surprised. In addition to our nation being completely divided politically, our society has a history of elevating men who embody hateful and immoral ideologies. Time and time again, men who exhibit qualities that belittle, bully and harm others are put into positions of fame and power. And although these men may be criticized by a portion of the population, there continues to be enough supporters that accept and approve of them.

I think about the National Football League and the growing number of players who have been charged with domestic assault. Children wear Tampa Bay Buccaneers football jerseys with Antonio Brown's name on the back, celebrating a man who has a history of charges that include sexual assault and battery. I think about the late Sean Connery, who was honored by many of my friends on social media after his recent passing. The same Sean Connery who, for many years, defended his position that "it's absolutely right" to slap a woman when "they're not happy with the last word."

Male celebrities aren't the only ones exhibiting these types of behaviors. According to the Federal Bureau of Investigation's Uniform Crime Reporting Program, in 2019 men accounted for 78.9 percent of all violent crime arrests, including 88 percent of arrests involving murder. There's a huge problem in our nation regarding the amount of violence caused by men.

The term "toxic masculinity" has been used widely to increase awareness of the troubling qualities of masculinity, such as dominance, violence, sexism and homophobia. Indeed, this term has resulted in many much-needed workshops, discussions and movements. But I worry that the term fails to address many of the issues surrounding manhood that contribute to a world full of gender inequality and prevents men from truly engaging in meaningful reflection that can lead to important, intentional changes in their thoughts and behaviors.

Because "toxic masculinity" has mostly been associated with traits such as violence and sexism, many men can distance themselves from the "toxic" label. Just because they're not engaging in the more blatant offenses, they consider themselves to be one of the "good guys." However, "toxic masculinity" fails to bring attention to the things men do on a daily basis, myself included, that perpetuate gender inequality.

According to research published in the American Political Science Review in 2012, men talk 75 percent of the time in meetings when both men and women are present. Another study from George Washington University "found that men interrupted 33 percent more often when they spoke with women than when they spoke with other men." It's fairly common to hear men refer to women as "girls" in casual conversations. Men need to increase their awareness around these everyday issues.

I want to model healthy masculinity for my daughters and avoid words and actions that implicitly feed into the false narrative that men are more important than women. I make mistakes all of the time, including commonly interrupting my partner while she's talking, but I'm always trying to do better. Here are some tips for modeling healthy masculinity for your children.

Less than a week after the election, I listened to vice president-elect Kamala Harris speak during the Democratic victory celebration.

"While I may be the first woman in this office, I will not be the last, because every little girl watching tonight sees that this is a country of possibilities," Harris said.

I'm thankful that my young daughters' earliest memories of the White House will be that of a woman in power, someone who they can look up to. And I'm hopeful that the positive momentum will continue, allowing more glass ceilings to shatter. I'm counting on men to continue to make more space at the table for those who are unheard and underrepresented.